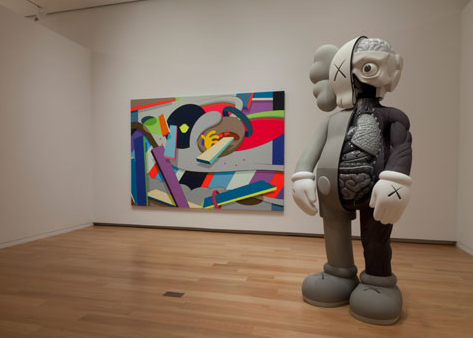 I grew up in the age of Super Nintendo and Nickelodeon cartoons. Bright colors, animated characters, and pixilated shapes were familiar aspects of my world, part of the visual language of my childhood. Therefore, it is with a mixture of amusement and nostalgia that I'm beginning to see such well-known elements of my youth reappearing in artworks hung on museum and gallery walls, most noticeably in the Modern's current FOCUS exhibition, FOCUS: KAWS.

In our post-Andy Warhol world—indeed, in a post-Pop-art world—incorporating popular culture into fine art is not a new or novel idea. Warhol captured the people and products of the 1950’s and '60s— Marilyn Monroe, Coke bottles, celebrity portraits, Campbell's soup cans—by making them the subjects of his work. The exhibition catalogue for Andy Warhol: The Last Decade elaborates, explaining that Warhol utilized "methods of mechanical reproduction to create a pantheon of images that became icons of the mass culture of the era."

But the era of Warhol is gone. For those of us who didn't grow up in the age of Marilyn Monroe, Standard gasoline stations, or the Rolling Stones, it's difficult to associate those things with contemporary popular culture. They simply pre-date us. My generation grew up with Star Wars, Tweety Bird, Mickey Mouse, and SpongeBob SquarePants. As evidenced in the KAWS exhibition, images of Monroe and Campbell soup cans are being replaced by the characters that make up the present visual language.

KAWS, however, doesn't necessarily attribute nostalgic elements to the incorporation of such beloved animated characters in his work. In Interview magazine, KAWS claims that "SpongeBob was something I wanted to do because graphically I love the shapes. But honestly, when I'm painting SpongeBob, I'm not thinking, 'Oh, I loved this episode.'" He also says that "most of the time when I'm using an image like SpongeBob, I’m trying to attain a quality in the painting that is visceral and has less to do with the narrative of the character." Andrea Karnes, curator at the Modern and curator of the KAWS exhibition, suggests that while no direct narrative is portrayed, per se, it cannot be entirely absent: "SpongeBob is known for being eternally boyish, with his childlike ways and naïve mistakes...KAWS depicts him in a way that does not completely silence this impact by showing us something instantly recognizable, while also impelling us to reconcile it with an essentially abstract vocabulary of painted forms. SpongeBob is a universally recognizable symbol. KAWS uses the image as a jumping-off point."

Whether KAWS is exploring these cartoon characters simply as animated shapes, as elements of nostalgia for the millennial generation, or some combination of both, it has definitely been interesting to see a more contemporary version of "Pop" on the walls.