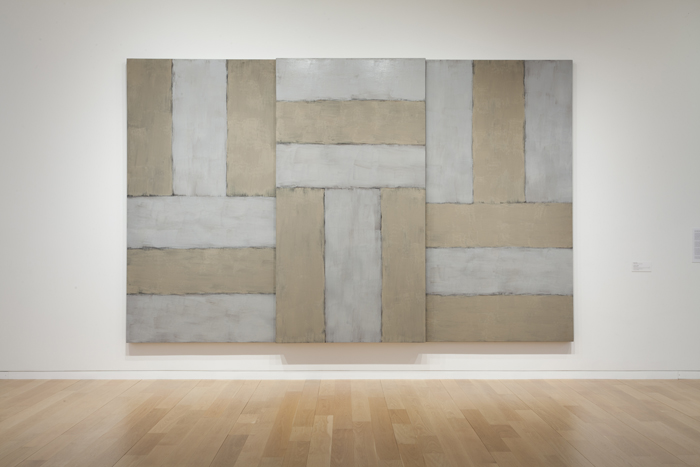 Sean Scully's Catherine series is continuously installed in the second floor galleries as part of the Modern's permanent collection. The series came about during Scully's marriage to Catherine Lee. Between the years of 1979 and 1996, the couple would select what they considered to be the best painting from Scully's production that year. The resulting series presents a unique group of works (each named Catherine) that, according to Brian Kennedy's The Art of the Stripe, is "absolutely and irrevocably and intrinsically connected to real time."

Common to all of the Catherine paintings is the stripe. Scully's interest in stripes stems from the variety of colors and patterns that he saw on tents and djellabas (traditional wool robes) during a trip to Morocco in 1969. He initially employed them as a predominantly aesthetic component: "The stripe in a sense stops being a stripe, in that it doesn't go from one end of the picture to the other. It's broken up. It becomes fractured and bangs into itself within the field, so that they're more like bars or bands. They're not really stripes anymore." However, his approach soon became much more metaphorical. As he explained in 2007, "You can make it into a shape—in other words, an event and everything in between. So on one end you have got the stripe as a substitute for the figure and at the other end, if you multiply it enough and reduce it in scale enough, you can make it into a pattern. You've got, in other words, the journey of individualism to the possible cosmic, all using the same unit."

The stripes take on an almost architectural quality in some of the paintings, particularly those since the mid-1980s. The vertical divisions in these paintings essentially turn them into disguised triptychs. In Sean Scully: Paintings, Pastels, Watercolors, Photographs 1990-2000, Armin Zweite observes that, "despite the largely identical forms [of these paintings], a different coloration and divergent pictorial order produce a completely different effect." This triptych effect is particularly evident in several of the Modern’s works, such as the maroon-and-orange Catherine (1990), and the silver-and-gold Catherine (1995). 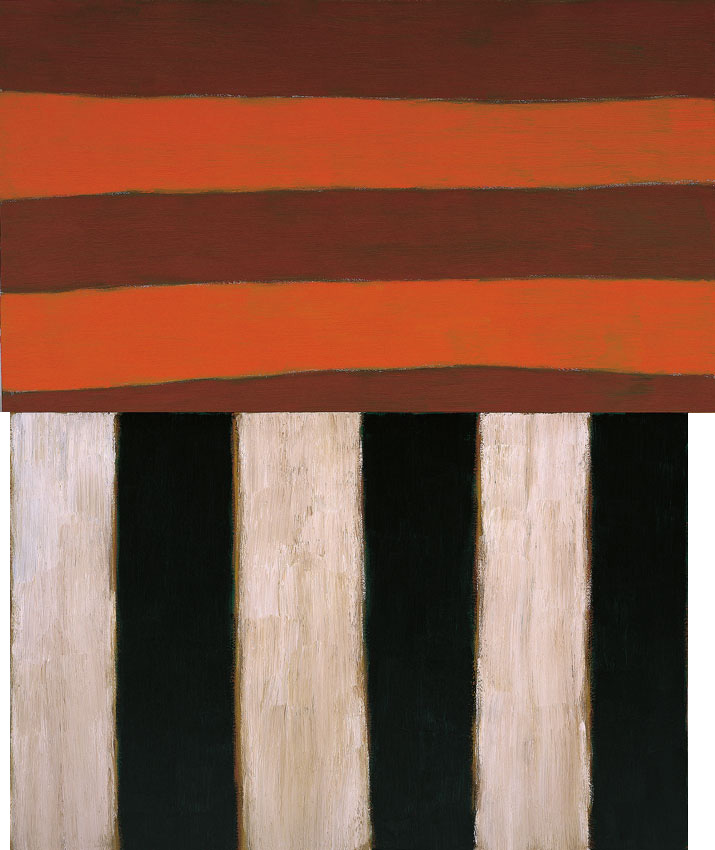 Scully was also interested in diptychs, as evidenced by Catherine (1983) and Catherine (1994), noting that "the pair, and the whole idea of coupling, is fundamental to my work. I've been working with diptychs for many years, which I believe represents an obsession with relations." The artist has said that he was interested in putting relationships back into painting, and that the primary relationship he focuses on is that of "ourselves in the mirror, or ourselves with one another."

Zweite asserts that, when viewed this way, the "works are tightrope acts that are about the balancing out of the part and the whole, of figurative and ground, of structure and pattern, of discrepancy and harmony, of expansion and limitation, of identity and difference." Scully, however, provides a much more succinct description: "My work is about the difficulty and possibility of coming together."