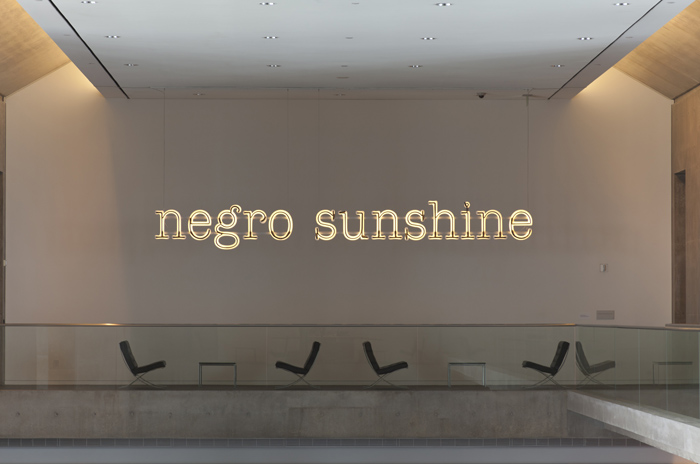 “Rose Johnson was a real black negress. Rose laughed when she was happy but she had not the wide abandoned laughter that makes the warm broad glow of negro sunshine. Rose was never joyous with the earth-born, boundless joy of negroes. Hers was just ordinary, any sort of woman laughter.” Gertrude Stein, novella Melanctha in Three Lives, 1909.

Spell check doesn’t recognize the word “negress” and it wants to capitalize “negro.” There are plenty of words that the program doesn’t recognize or misinterprets but, as if these words don’t already have my attention, my computer insists on underlining them in red and green.  Like much of Glenn Ligon’s work, Warm Broad Glow—a neon sign, painted black that reads “negro sunshine” and is set against a reflective background —provokes its viewer.

I say viewer as opposed to reader because as it is presented in this context, the work is viewed rather than read. To enter the Modern and see those two words hanging at the edge of the balcony overlooking the lobby is very different from reading them in the context of the sentence, paragraph, page, and book in which they appear in Gertrude Stein’s story of a young, mixed-race woman whose pursuit of acceptance is played against other characters such as Melanctha’s friend Rose Johnson.

It is noteworthy that Ligon created a neon sculpture based on the writings of Gertrude Stein, who was as engaged with art and objects as Ligon is with literature and language. Stein might even be seen as distorting and manipulating language through repetition and stream of consciousness in ways that challenge the reader and that parallel Ligon’s own use of text to press conventions of “viewing” art. Of course, the words negro sunshine are read in Warm Broad Glow and associations between the two are unavoidable. However, this word pairing, lifted from Stein’s story and presented as art, is “read” the way all art is. The figures, colors, objects, etc., in a painting are “read” as they are named and assigned associations that inform the viewing experience as much as the artist’s formal and material decisions. In the case of Warm Broad Glow, the choice of a font that replicates old typewriter characters creates a sense of bygone days in concert with the outdated word “negro,” which seems alien and obtuse to the contemporary viewer.

A group of fourth graders who recently visited the piece reportedly read Stein’s “negro” as the Spanish word negro, meaning black, and questioned the contradiction of black sunshine. This interpretation is reinforced by Ligon’s decision to paint the neon tube, or blacken the light, and then place it against a reflective backdrop to produce a shadow made of light. These observations might also remind viewers of Ligon’s earlier paintings made with stencils and oil sticks that appropriate the phrase, “I feel most colored when I am thrown against a sharp white background” from Zora Neale Hurston’s essay, “How It Feels To Be Colored Me,” another text-based work that challenges the concepts of reading and seeing as they apply to art.