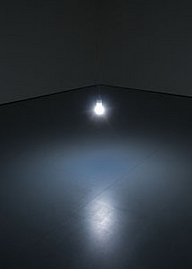 The three works in FOCUS: Katie Paterson deal with notions of the miniscule and the infinite, triggering my mind to race between these extremes. In works such as Langjökull, Snæfellsjökull, Sólheimajökull, 2007, the grandeur of a glacier is coupled with the sound a long-playing ice-record makes as it spins on a turntable. Light Bulb to Simulate Moonlight, 2008, juxtaposes the quality of light cast by the earth's moon (with all its expansive, nocturnal associations) within the confines of a gallery-turned-gray environment and a single dangling light bulb. And All the Dead Stars, 2009, is fueled by those things I often take for granted, the glowing, glaring balls of light that are stars, continuously hovering above and often an unfathomable number of miles away.

Each work by Paterson begins with an idea—a curiosity. She wants to know about the ins and outs of the world (and space) that surrounds her. The idea is a kernel that matures as the artist engages in a dialogue with various scientific professionals in order to learn more of her chosen subjects. What sounds does a glacier emit? How are our lives tied to the earth's moon, and what connections does this pairing evoke? How can the cataclysmic death of stars be visually presented and documented? After spending time with this exhibition, I have questions of my own. Does the meaning of a specific sound change when mediated via contemporary technology? Is the simulation of a natural occurrence an effective doppelgänger for the real thing? And what year did we begin counting years? I am aware that the arbitrariness (and simultaneous exactitude) of time is something that gnaws at me as I engage with the works in the exhibition. Paterson's investigations elegantly scratch the surface of the limits of our understanding of the natural world, prompting me to look at everything from the water in my glass to the waxing and waning moon with renewed attention.