The role of the written word in/as art is of abiding interest to me. Whether it be language as artmaking material (as is the case with Lawrence Weiner’s work), the wall drawings of Sol LeWitt (where the instructions for carrying out a piece are as crucial as the drawing itself), or the often dense and always rich writings of the British group Art & Language (their essays being best understood as art), recent art history is brimming with artists engaging with language in order to better elucidate a specific conceptual and aesthetic sensibility. This shift to language is much studied and theorized about and seems to be described as a way for artists to shed the shackles of materiality in favor of the freedom of words. Of course, nothing is ever as clear as that. The gray area between material and text provides an opportunity to consider how one affects the other. The results are rewarding. 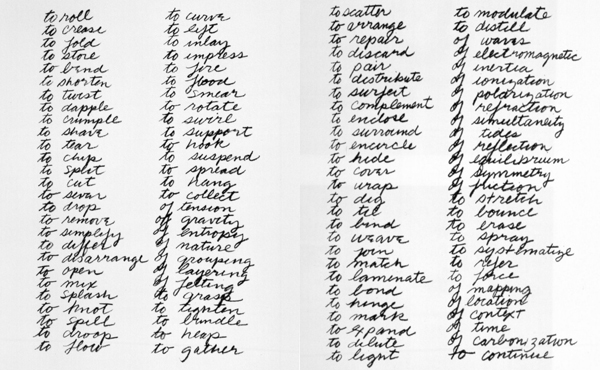 I recently had the occasion to be reminded of Richard Serra’s hand-scrawled Verb List, 1967–68, which consists of two sheets of paper with the infinitive form of 84 verbs and 24 possible contexts. Considered a work of art itself, this wide-ranging catalogue of actions breathes new life into an artistic practice some consider to be the embodiment of materiality. Serra is known for his hulking, majestic, and determinedly material sculptural work. Language would seem to have little room in this oeuvre of bended, compressed, and torqued rubber, lead, and steel forms. 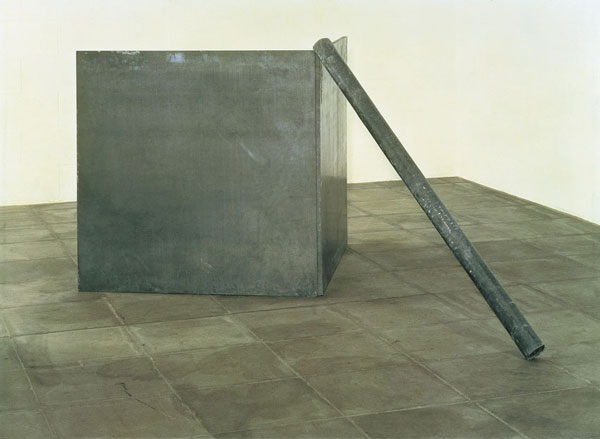 Using Serra’s Verb List as a jumping off point, it is invigorating to give voice to the processes that crafted and molded his Right Angle Corner Prop with Pole, 1969, an important early work currently installed in our first-floor galleries. The sometimes dull, sometimes lustrous patina of the sculpture’s lead surface needs the words/actions to roll, to crumple, to expand, to support, to distribute in order to fully realize its potential as matter. These words give the sculpture the space to fully be. Bringing such specific actions into the conversation allows the materiality of the work to shine. Such placeholders are rich signifiers for actions and imbue an already dynamic, tension-filled work with a zeal and immediacy in a way that only language can. It is through the written word that I blend the object-ness of what I am looking at with the act(s) that realized its physical manifestation. What verbs do you use?