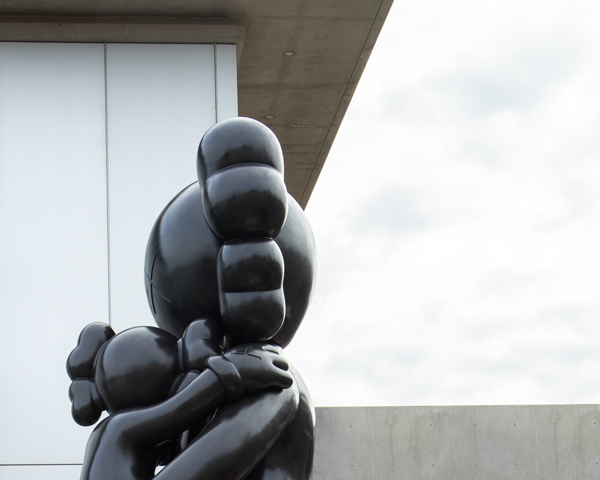 CLEAN SLATE, 2018 by KAWS
Director Marla Price is pleased to announce the Modern Art Museum of Fort Worth’s acquisition of a monumental bronze sculpture by KAWS. The work will be on view to the public beginning December 9, 2018.
In CLEAN SLATE, 2018, the central figure strides forward, embracing smaller, childlike figures in each arm, a gesture recognizable to anyone who has found themselves in the company of two tired toddlers. Featuring KAWS’s iconic COMPANION characters, the bronze sculpture stands 21 feet tall and overlooks the museum pond.
KAWS’s career began with graffiti in the 1990s; he quickly moved to making paintings, sculpture, and drawings informed by art history and inspired by cartoons. He has created a cast of recurring figures that candidly communicate fundamental aspects of human nature, executed with a clean, graphic, energetic style reminiscent of Pop art. His witty motifs reflect both irreverence and affection for our times. KAWS has a global audience of all ages that continues to grow as his recognizable imagery has made its way into the commercial world, in the form of toys and apparel, among other examples. With his massive international presence, KAWS is now one of the most influential artists of his generation.
This acquisition continues a relationship with KAWS that began in 2011 with a small-scale solo exhibition, part of the Modern’s FOCUS series. As a result of that show, in 2012 the Director’s Council voted to acquire the painting
WHERE THE END STARTS, 2011.
Also in 2012, KAWS’s COMPANION (PASSING THROUGH), 2010, was installed at the main entrance to the museum. Originating as a toy in 1999, the COMPANION character expanded in size and was transformed into new materials like bronze and fiberglass starting in 2008 and wood in 2013. Even on a monumental scale, people connect with COMPANION’s humanlike form. Visitors took innumerable photographs with the seemingly shy, seated
COMPANION (PASSING THROUGH) during its short stay at the Modern, often echoing its gesture by covering their eyes with their hands.
Four years later, the Modern organized a mid-career retrospective of KAWS’s work. Named after the painting acquired in 2012, KAWS: WHERE THE END STARTS opened in Fort Worth in 2016 and traveled to Shanghai’s Yuz Museum in 2017. New variations on COMPANION took up residence throughout the museum, including a fiberglass version from 2016 of CLEAN SLATE that occupied the building’s entrance plaza; as with COMPANION (PASSING THROUGH) before, visitors responded to this piece with empathy and enthusiasm.
Situated on the North Terrace of the Modern, the scale and rich patina of the new bronze version of CLEAN SLATE, 2018, enter a dialogue with the surrounding concrete architecture and the moods of the pond. It creates a destination for study, photos, or simple reflection on the experience of being human.
Image credit: Clean Slate, 2018 in process. Courtesy the artist.
Back to top