This week, the teens were introduced to artist, professor, and SOUR GRAPES member Carlos Donjuan, who will work with the students for the next four classes. Carlos lives in Dallas and teaches at the University of Texas at Arlington. His work has been shown locally, nationally, and internationally, and it is an honor to have him as our visiting artist this season. 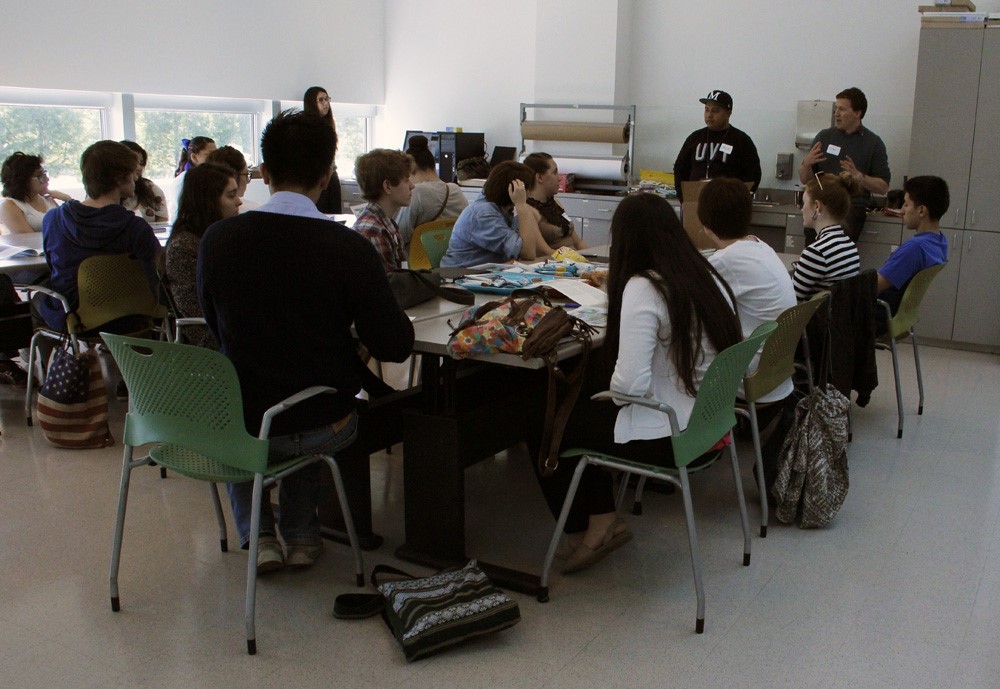 Carlos began class with a brief introduction of himself and his work. He has always liked to draw and felt confident about his technical skill set, but he never imagined being able to make that a career. Carlos studied for one year at UNT in Denton and finished his degree at UTA in Arlington. After finishing undergrad, he was encouraged by his instructors to continue his education and attend graduate school. Carlos was accepted to UTSA in San Antonio, and it was during that time he began to hone his style and receive opportunities to show his work. Carlos stressed the importance of a good work ethic and positive mental attitude to the students, two things that have undoubtedly contributed to his continued success. He considers himself lucky as his time is spent doing things he greatly enjoys: creating his own art, teaching, and collaborating with his collective, SOUR GRAPES.

Before heading to the Urban Theater: New York Art in the 1980s exhibition, Carlos challenged us to give ourselves a tag name or identifying symbol. His intent for today was to have everyone invent a creative alter ego—an art persona—symbolized in an image or script. As students viewed the works in the exhibition, they were encouraged to keep that in mind.

Carlos discussed works with a relationship to graffiti and the street. We talked about pieces by Jean-Michel Basquiat, Keith Haring, Kenny Scharf, and KAWS. Carlos shared his understanding of each work of art and each artist’s particular practice. Throughout our discussion, students were encouraged to think about the artists’ and their own relationship to popular culture, the world of street art, appropriation, political activism, and picture making. 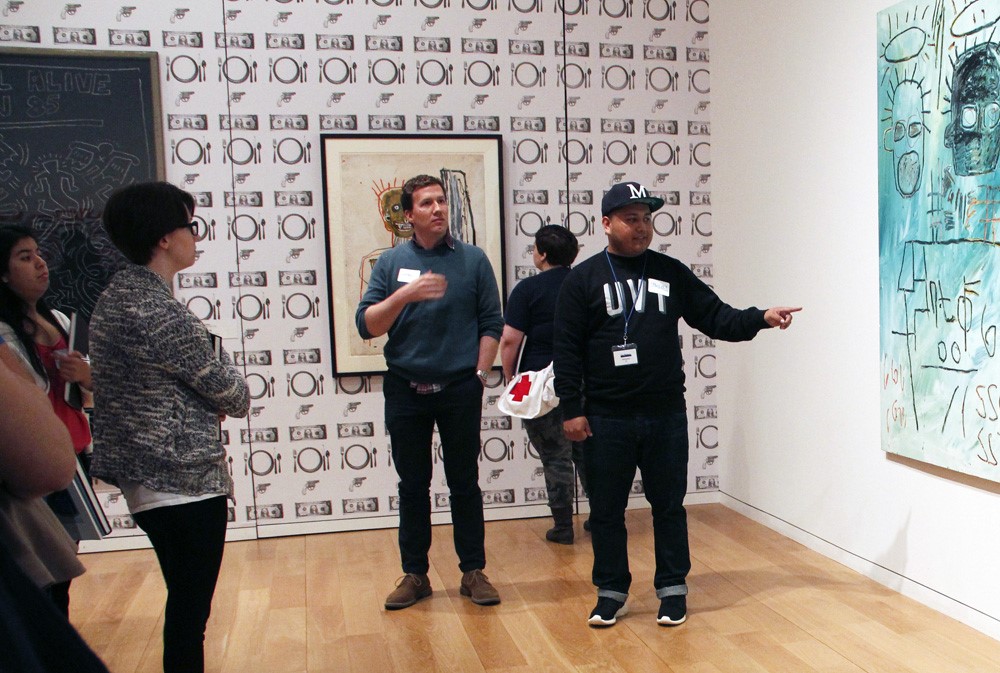 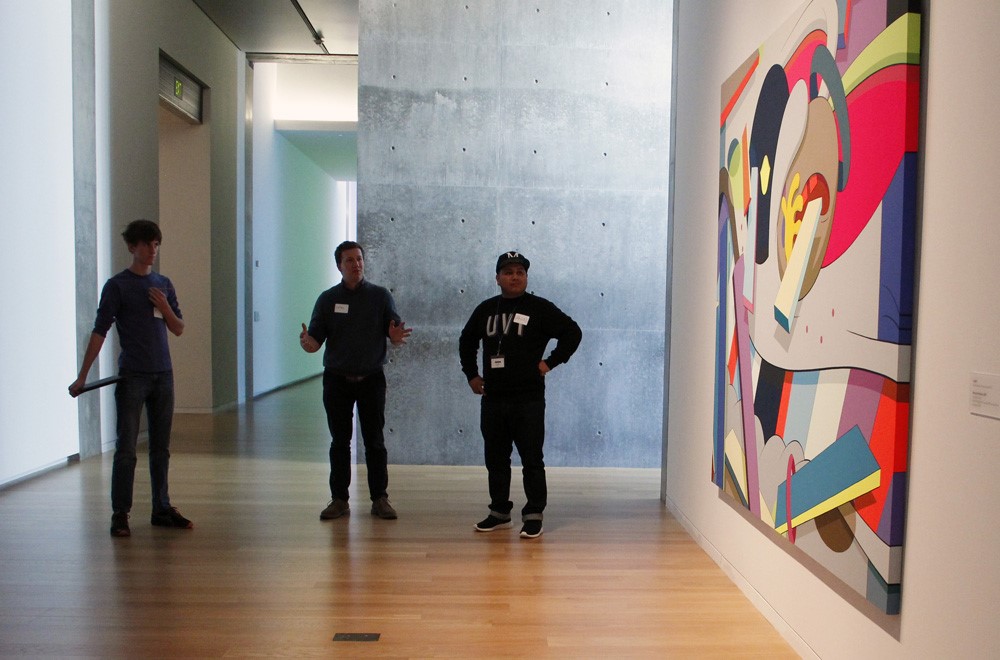 Following the discussions in the galleries, the class headed to the lecture room where Carlos shared images of his personal work, as well as the work he creates with the group SOUR GRAPES. We learned that he uses specific imagery to relay ideas that connect to his Latino heritage and his experiences growing up. Currently Carlos is producing a body of work that he describes as figurative and illustrative. In these pieces, portraiture comingles with abstraction and the tropes of illustration to create playful, whimsical worlds that address his cultural and political identity.

Back in the studio, Carlos showed us how to create a tag or personal symbol. He used the white board to show a variety of tagging styles from LA to New York to Europe. 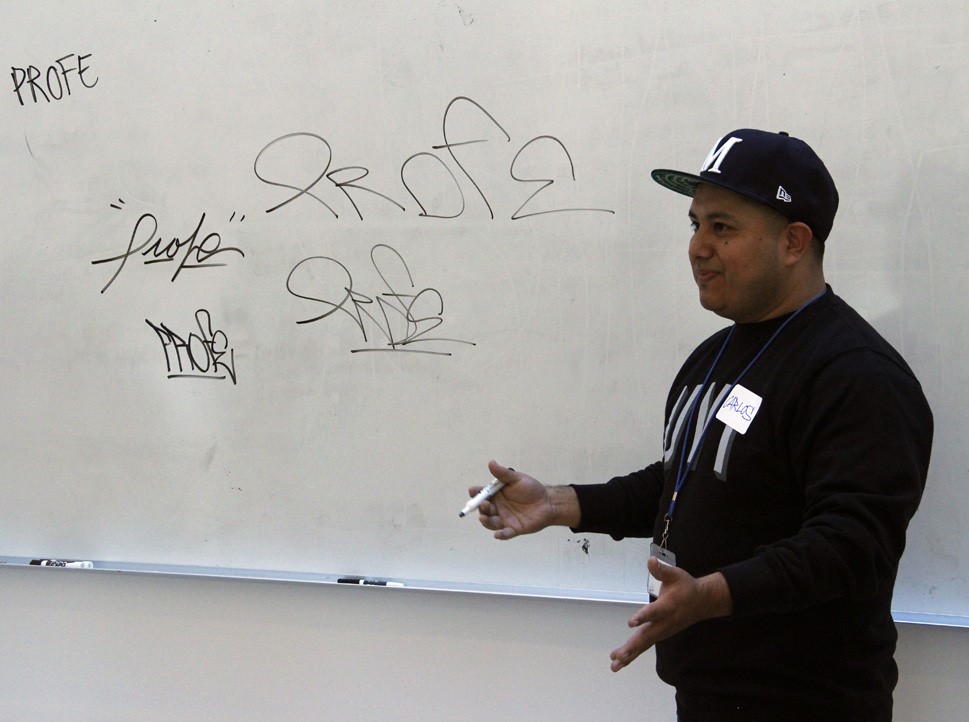 Each script has distinctive mark, style, shape, and spacing. Carlos demonstrated his temporary tag name, PROFE (professor shortened in Spanish). Students worked on their tag names and styles both on the white board and in their sketchbooks, with Carlos’s assistance. 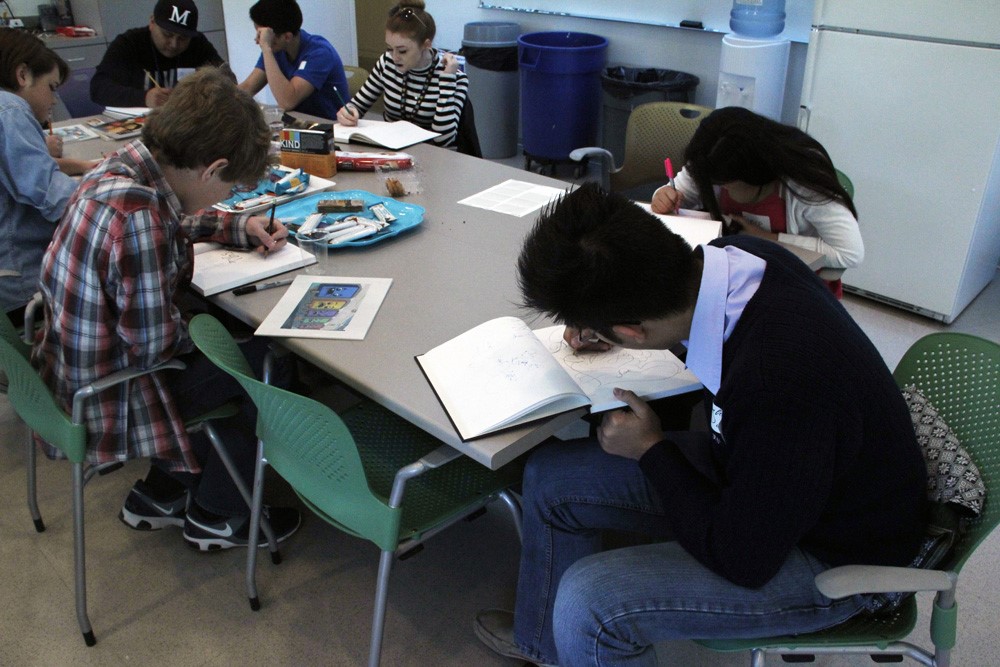 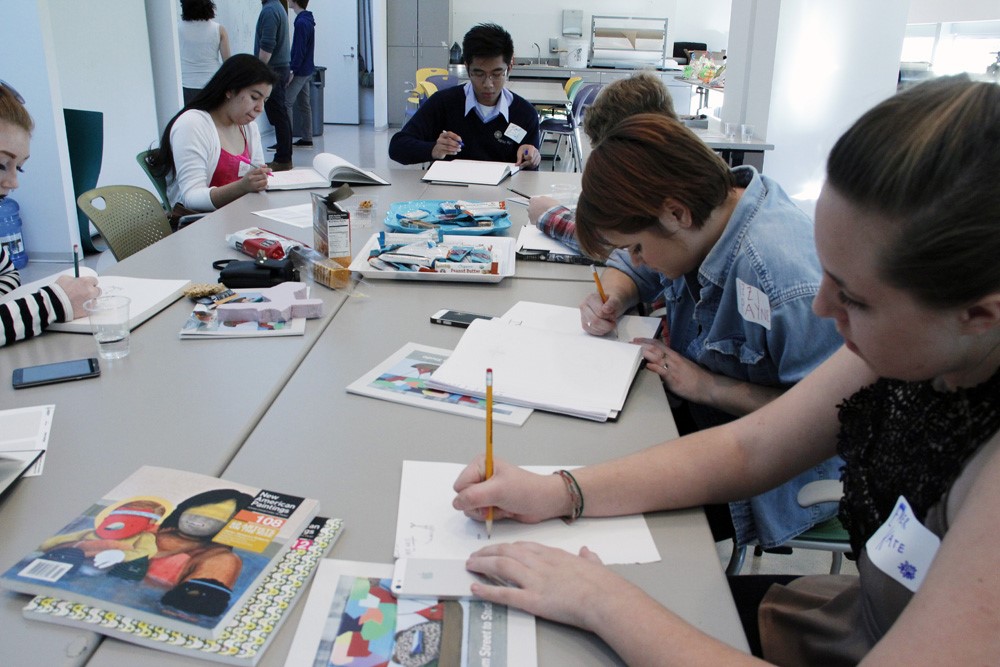 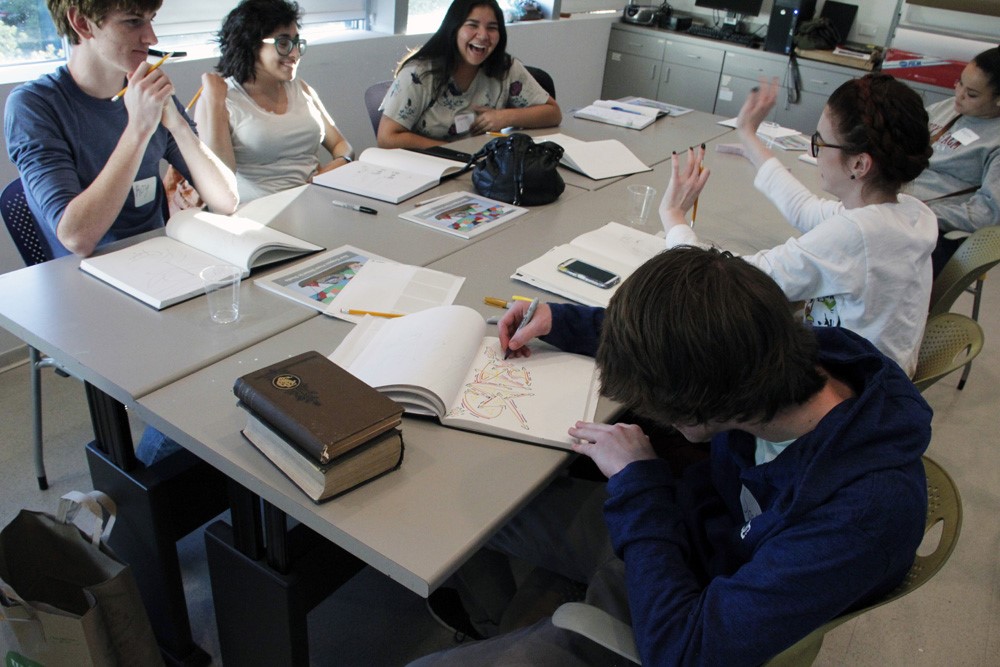 Lively discussions ensued as the students sketched and brainstormed in their books. 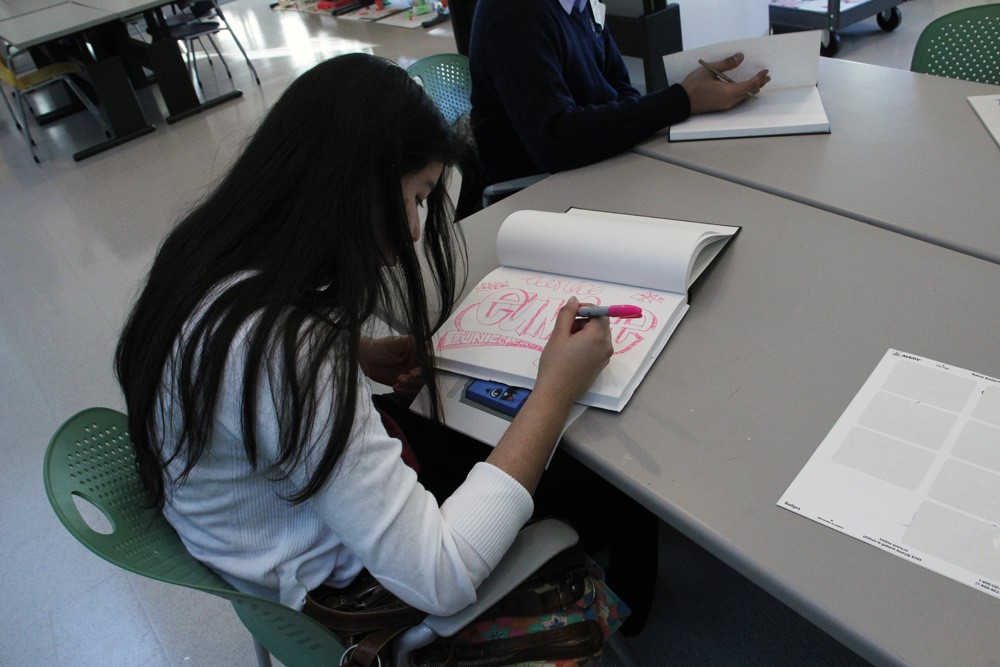 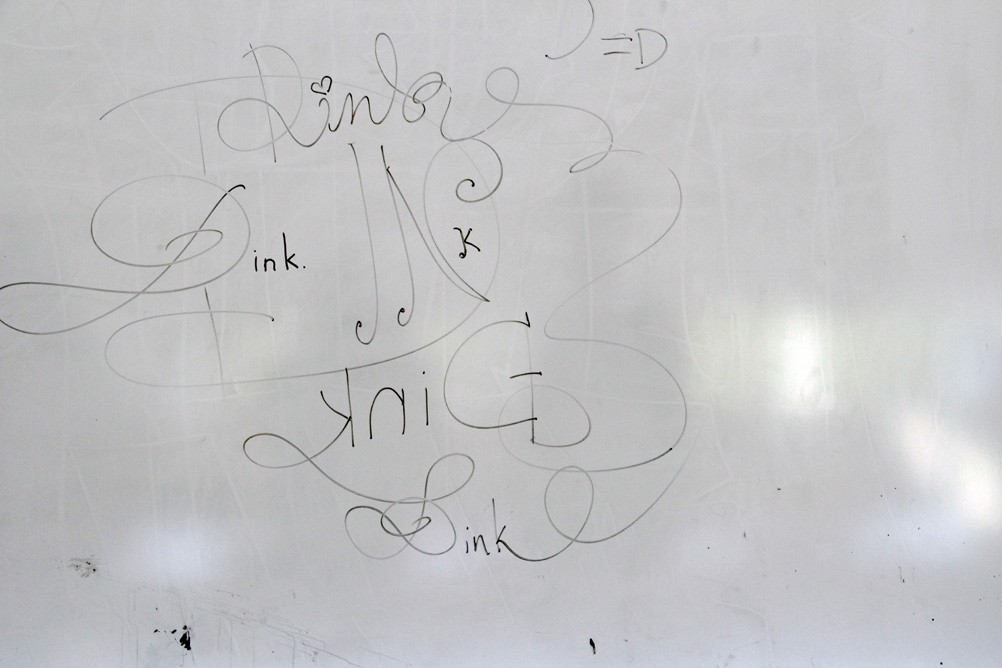 Everyone was encouraged to continue working on their tags over the week, refining them into confident works of art. As usual, we closed class with a group photo. 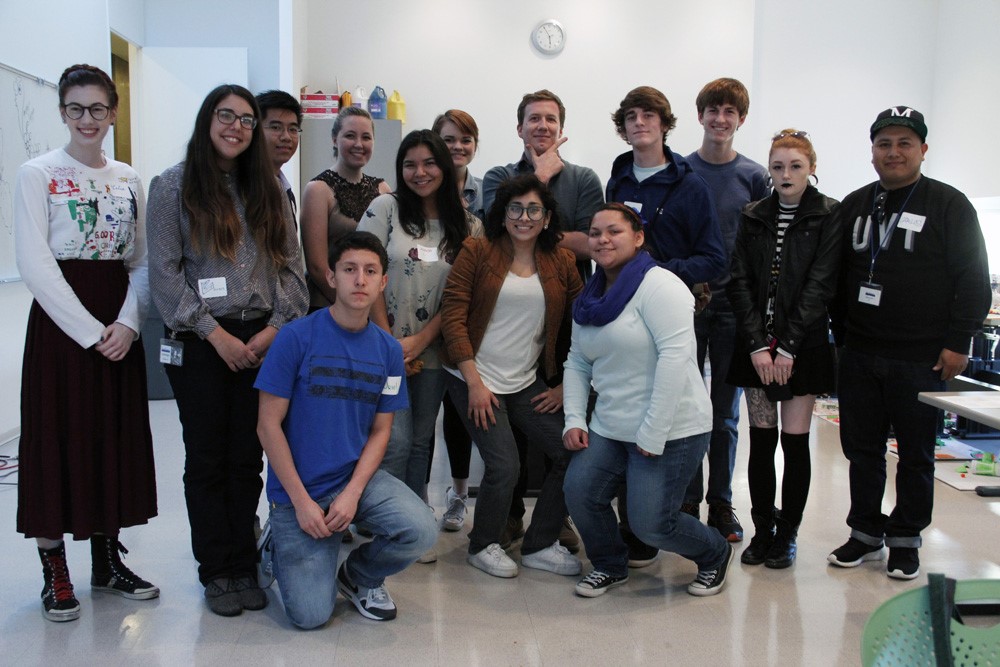