This week, the Teen/Artist Project was visited by Dallas-based Arthur Peña. 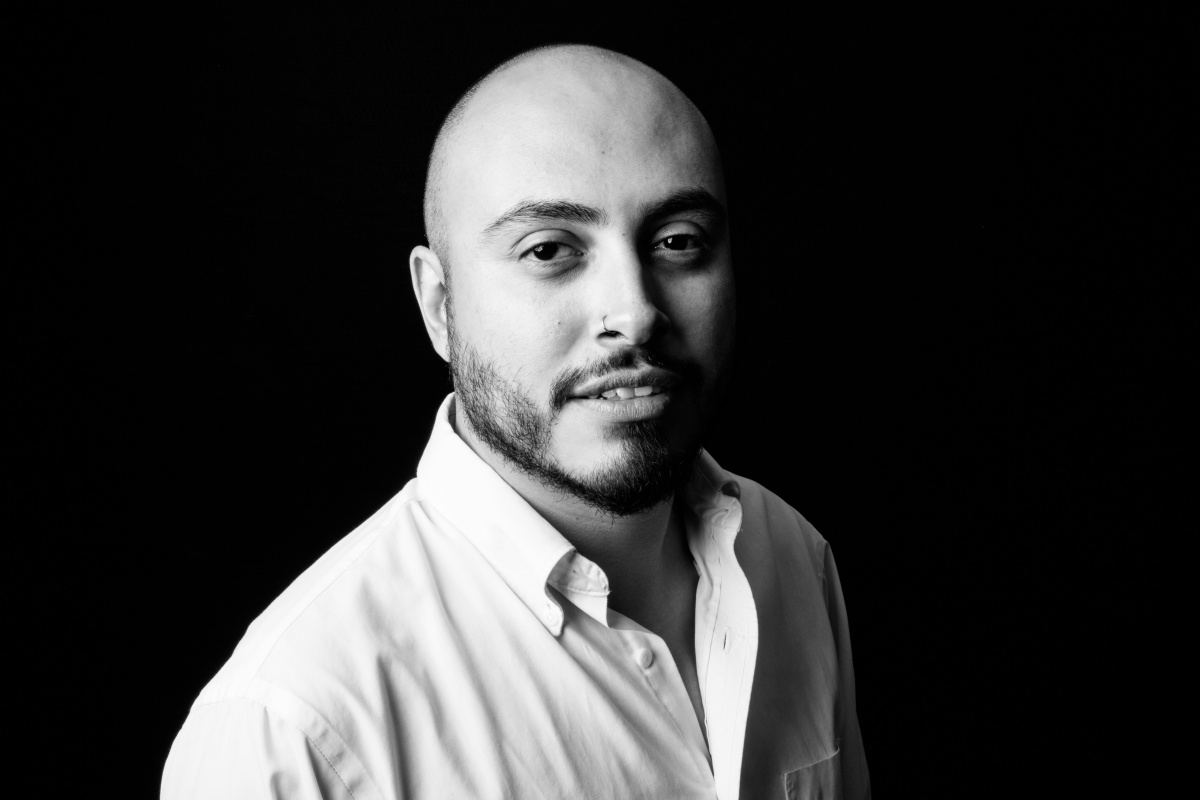 After a brief introduction, the class headed to the lecture room where Arthur talked about himself and his work. He scrolled through his website with the class, which is not only a chronicle of his artwork but also a record of his various interdisciplinary projects. On his resume, he calls these activities “Cultural Instigations.” One of these instigations is an experimental exhibition space in West Dallas called WARE:WOLF:HAUS. Another is called VICE PALACE, described as a “Roving Progressive Music Venue.” Arthur is a contributing writer for the Texas magazine Arts+Culture and several other online and printed publications. He allowed for a short Q&A session and then introduced the project for the day: creating figurative collages that conflate the works of Mark Bradford and Robert Longo.

In the exhibition Urban Theater: New York Art in the 1980s, we viewed and talked about the three Robert Longo drawings from the series Men in the Cities. 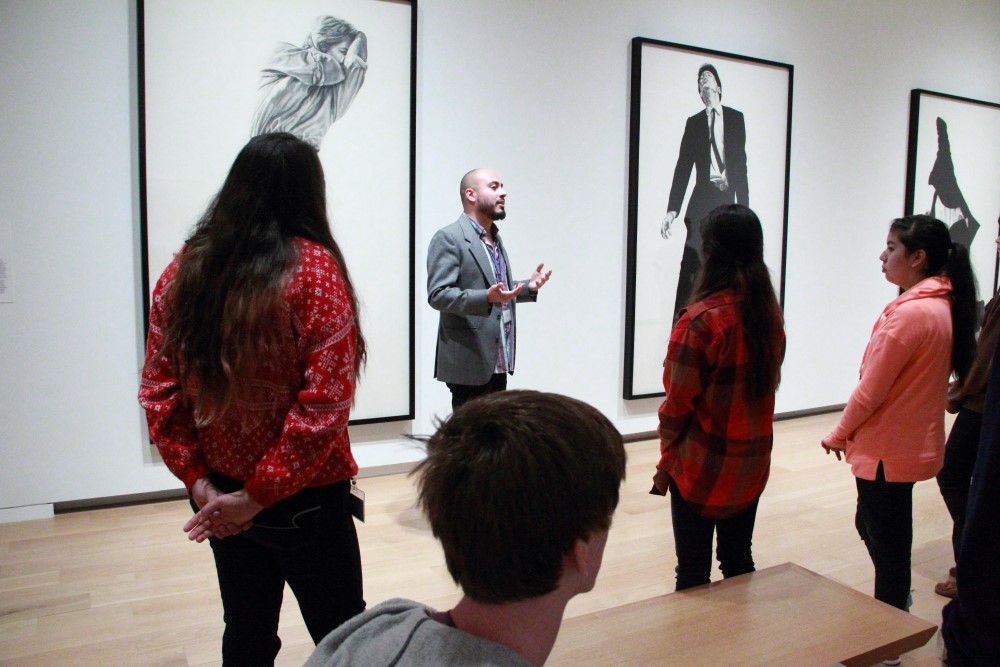 The works are black-and-white, heroically scaled graphite and charcoal drawings on paper. These precisely executed renderings are of anonymous people in extremely contorted poses. It is often said that the viewer cannot tell whether these figures are dancing or dying. From the Modern’s wall label, “The figures read as psychologically charged, but are strangely elusive in terms of the subjects’ own unreadable emotions. Their anonymity suggests the corporate apparatus and subverts individual essence to instead underscore the alienated, generic everyman.” 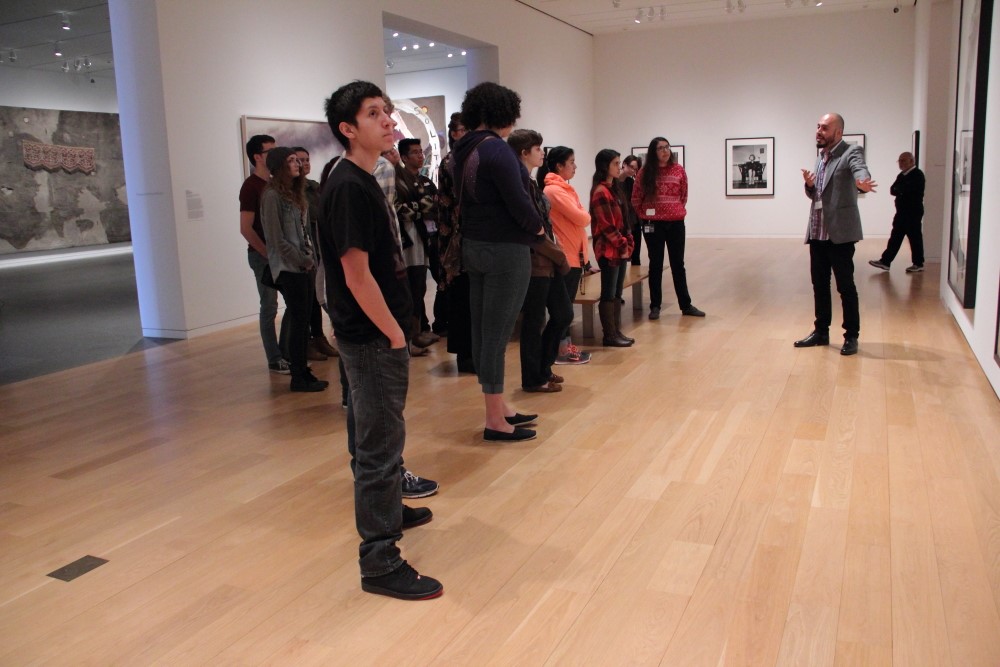 Arthur asked us to reflect on the psychological undertones and technique of these works. During the discussion, a couple of museum visitors joined the class and answered a few of the questions. As a matter of fact, they followed the teens up to Mark Bradford’s Kingdom Day, 2010, currently showing in Selections from the Permanent Collection.

Arthur explained that many of Bradford’s paintings are created from materials he hunts and gathers around his Los Angeles neighborhood. Kingdom Day is a bit different from many of his other cartographic abstractions in that the work was created on top of an actual 1992 billboard that advertised a specific event: the Los Angeles Kingdom Day Parade to honor the late Martin Luther King, Jr. The work specifically refers to the 1992 parade, a turbulent time in Los Angeles considering it was the year four policemen were tried and acquitted for beating Rodney King. 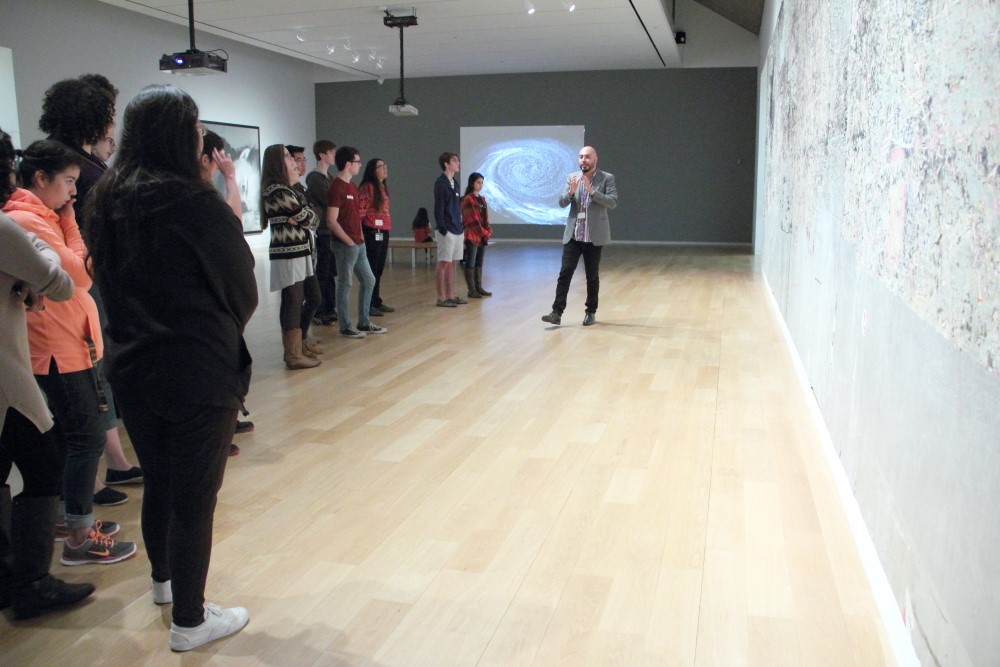 To get a sense of the scale and the intimate and intricate aspects of Kingdom Day, Arthur encouraged us get both as close as security would let us and also view the work from far away. Finally, we compared and contrasted this work with the Longo drawings downstairs. 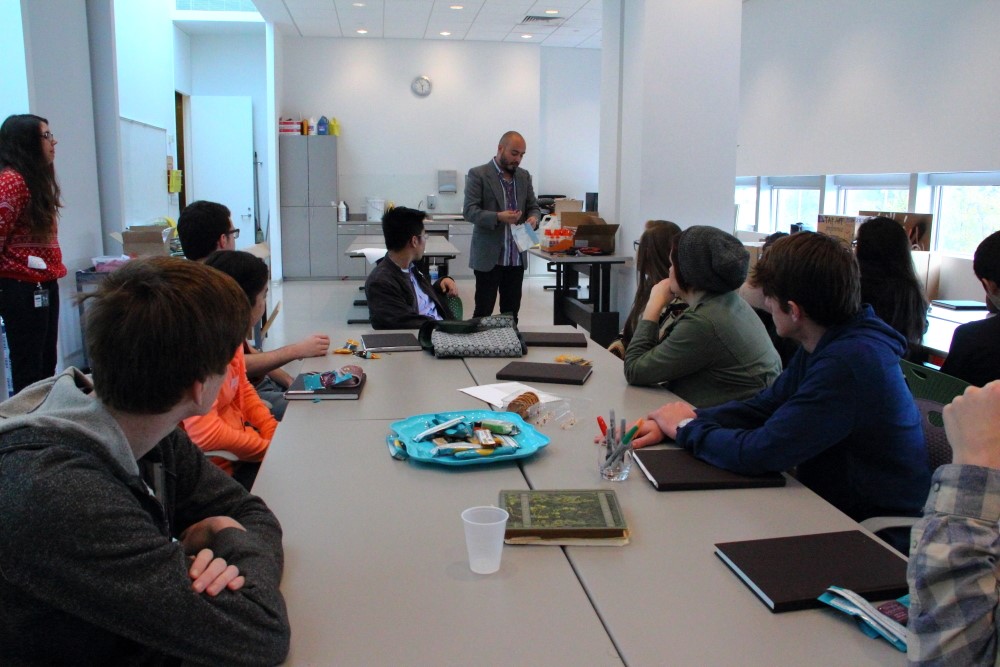 Upon returning to the classroom, the students grabbed partners and drew one another in contorted poses somewhat like those in the Longo works. 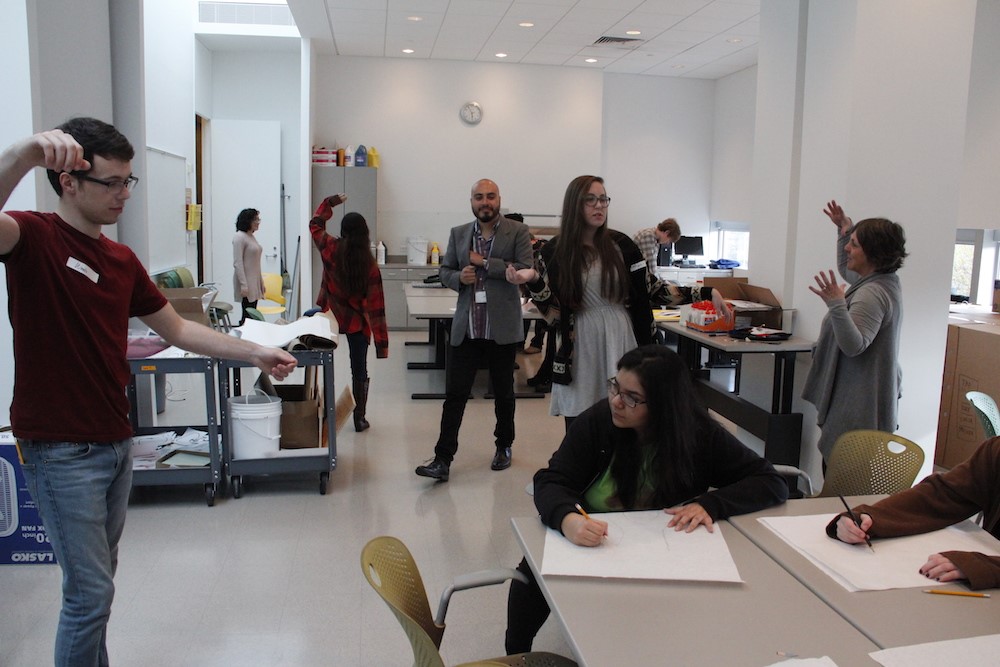 The drawings were to fill the entire paper and ultimately be completely covered in imagery torn or cut out from magazines and printouts provided by the Modern. 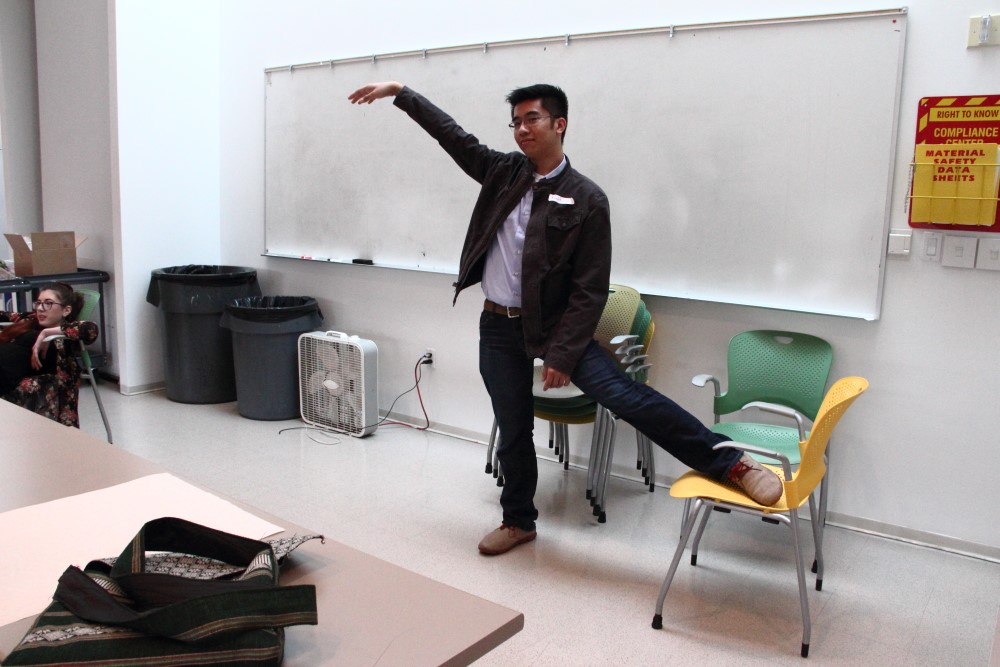 Students paired up and took turns posing. Lots of laughter commenced, as the poses were quite amusing. Once the drawings were complete, everyone started on the collage process. 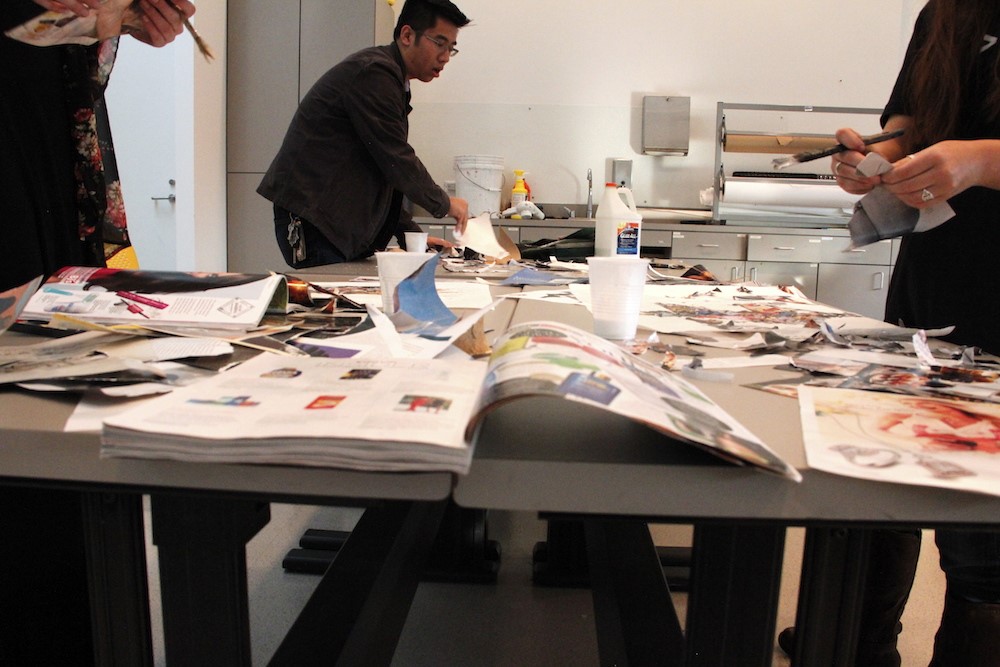 The students were focused and excited throughout the class. Each embraced a unique interpretation of the project. Some worked thematically, while others worked purely visually. Thus, we ended up with a variety of very interesting images. The work is strong, vibrant, emotional, and engaging. 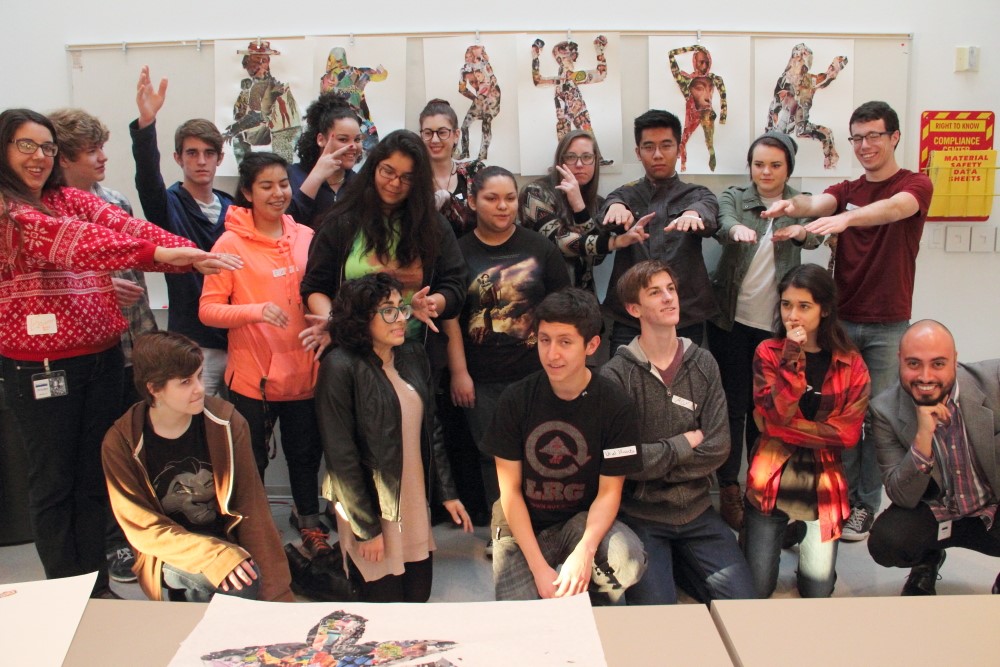 Most everyone was happy with their piece and, in closing, stated that they fully enjoyed the project and looked forward to the next class after the holidays.