T/AP’s fifth visiting artist is Brooklyn- and Dallas-based painter, educator, and writer Michelle Mackey. She is a very accomplished artist with a wide perspective. 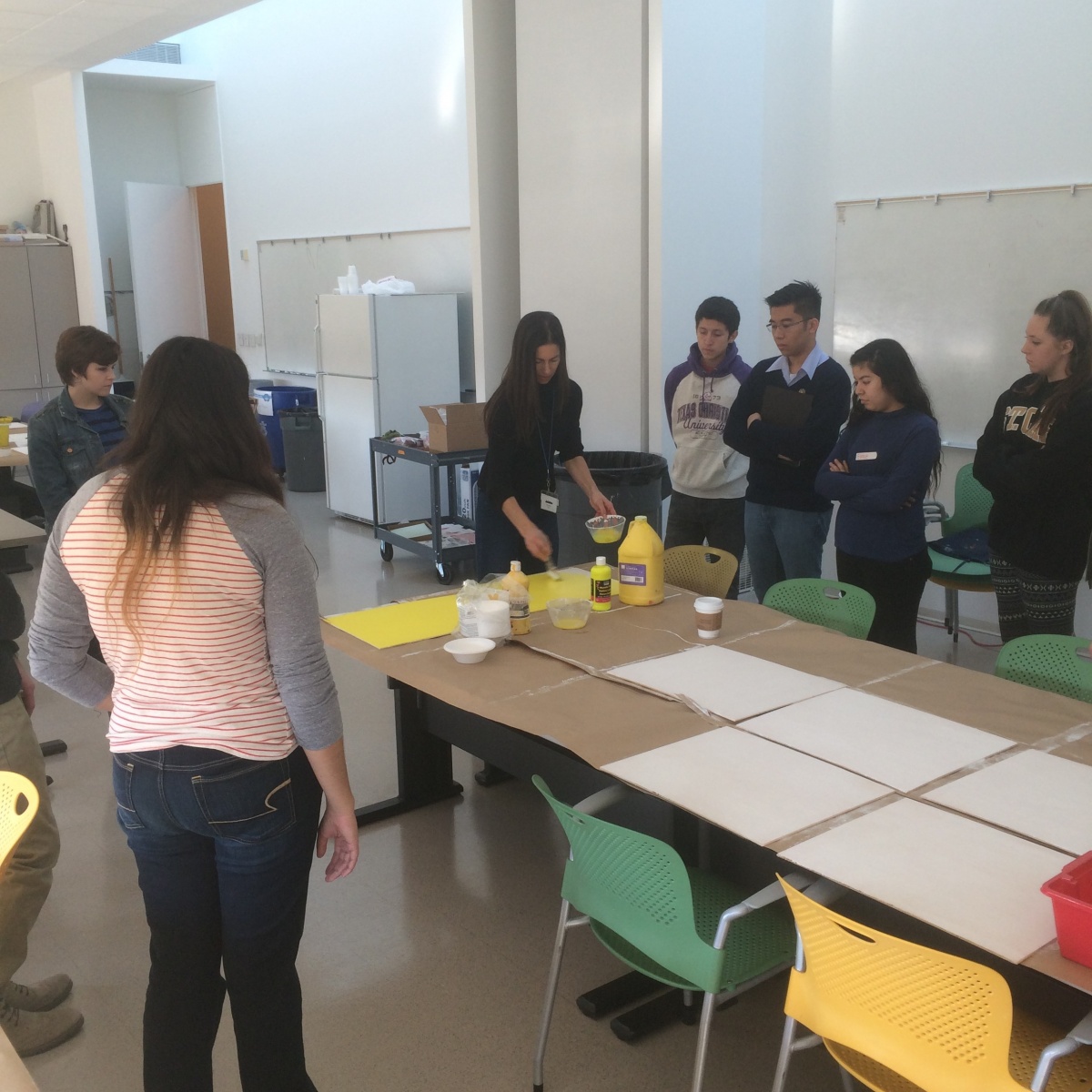 Today began in the classroom where students were immediately given a sixteen-by-twenty-inch wooden panel. Students were supplied with a variety of shades of yellow paint and large brushes and were asked to paint a wash over the entire panel. 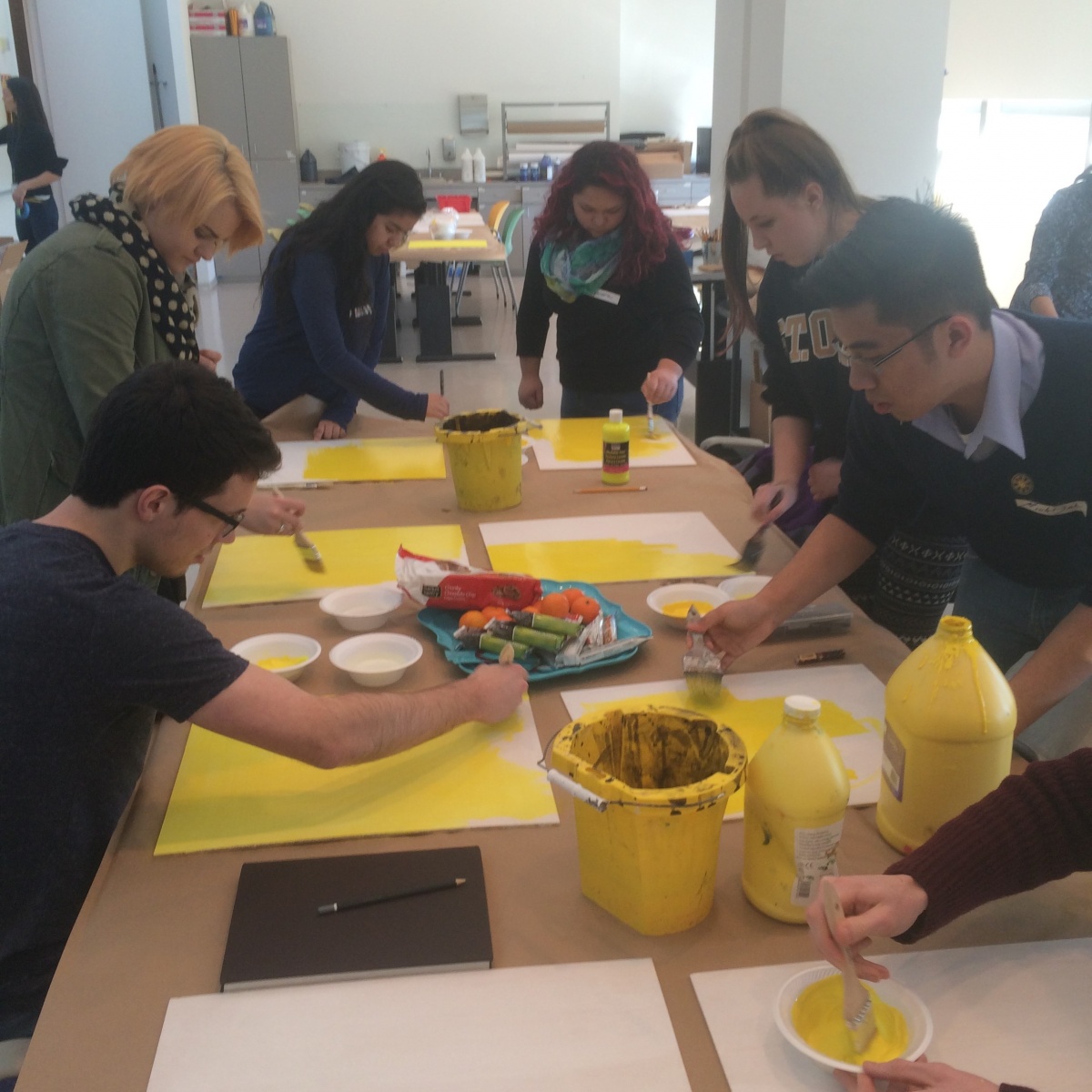 After each student’s panel was painted, we headed to the lecture room where Michelle shared images from the last 10 years of her career. We spoke in detail about the ideas, formal qualities, and techniques found within her paintings, as well her career as a set painter in the New York City film industry. 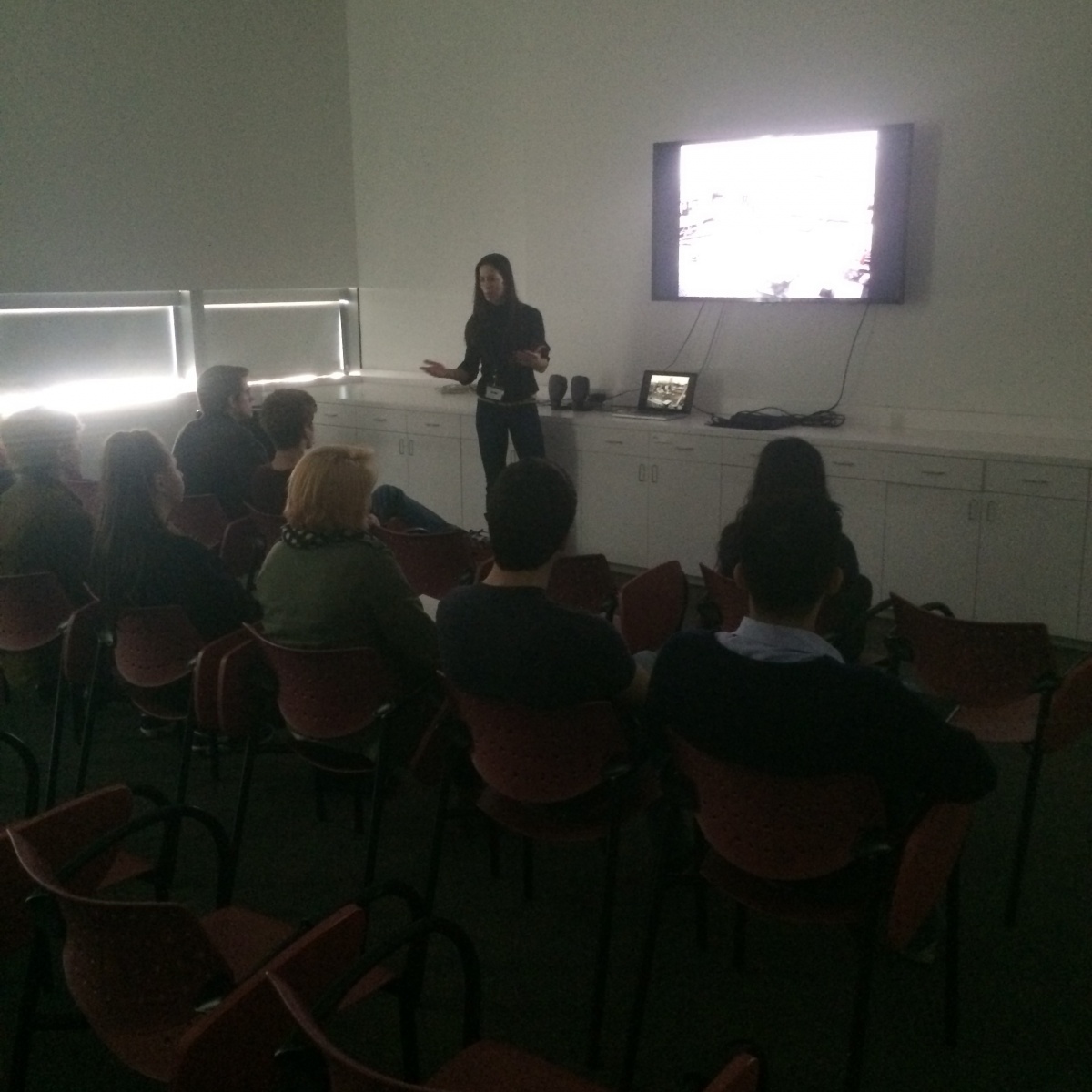 After the lecture, Michelle led us to the exhibition FOCUS: Jules de Balincourt. We spoke for a little while about what the paintings seem to depict and what the artist’s intentions could be. Then Michelle encouraged us to pay attention to the techniques de Balincourt uses to compose his works. Upon close inspection, the teens were able to tell that de Balincourt uses a tape resist technique to paint forms. As opposed to drawing or painting each mark, it looks like several of the marks are created by drawing in tape and then painting the exposed areas. His method creates beautiful surfaces and complex lines that defy a quick read. While in de Balincourt’s show, students were asked to draw five elements found in the work in their sketchbooks. 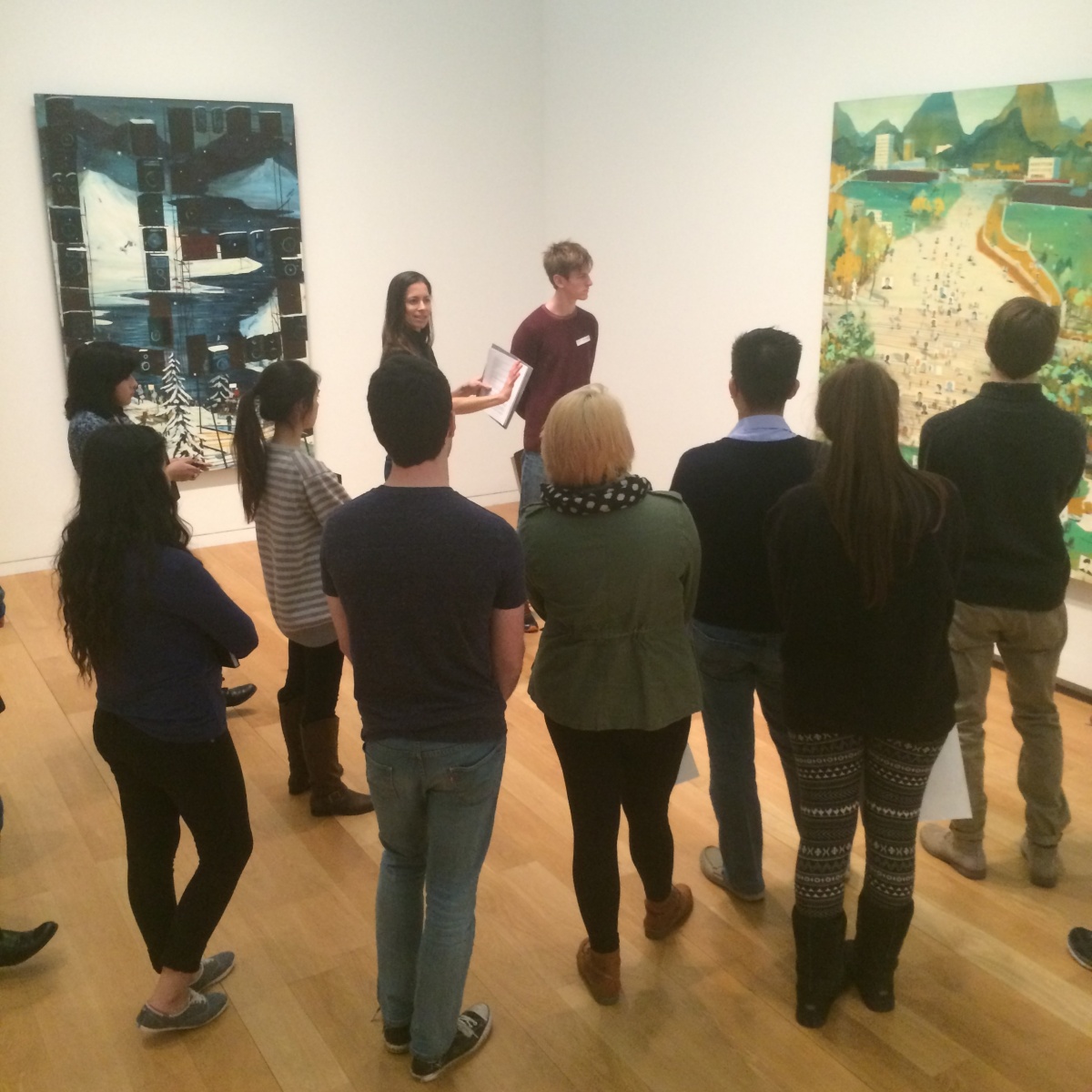 We next viewed two paintings by Philip Guston, both part of the Modern’s permanent collection. 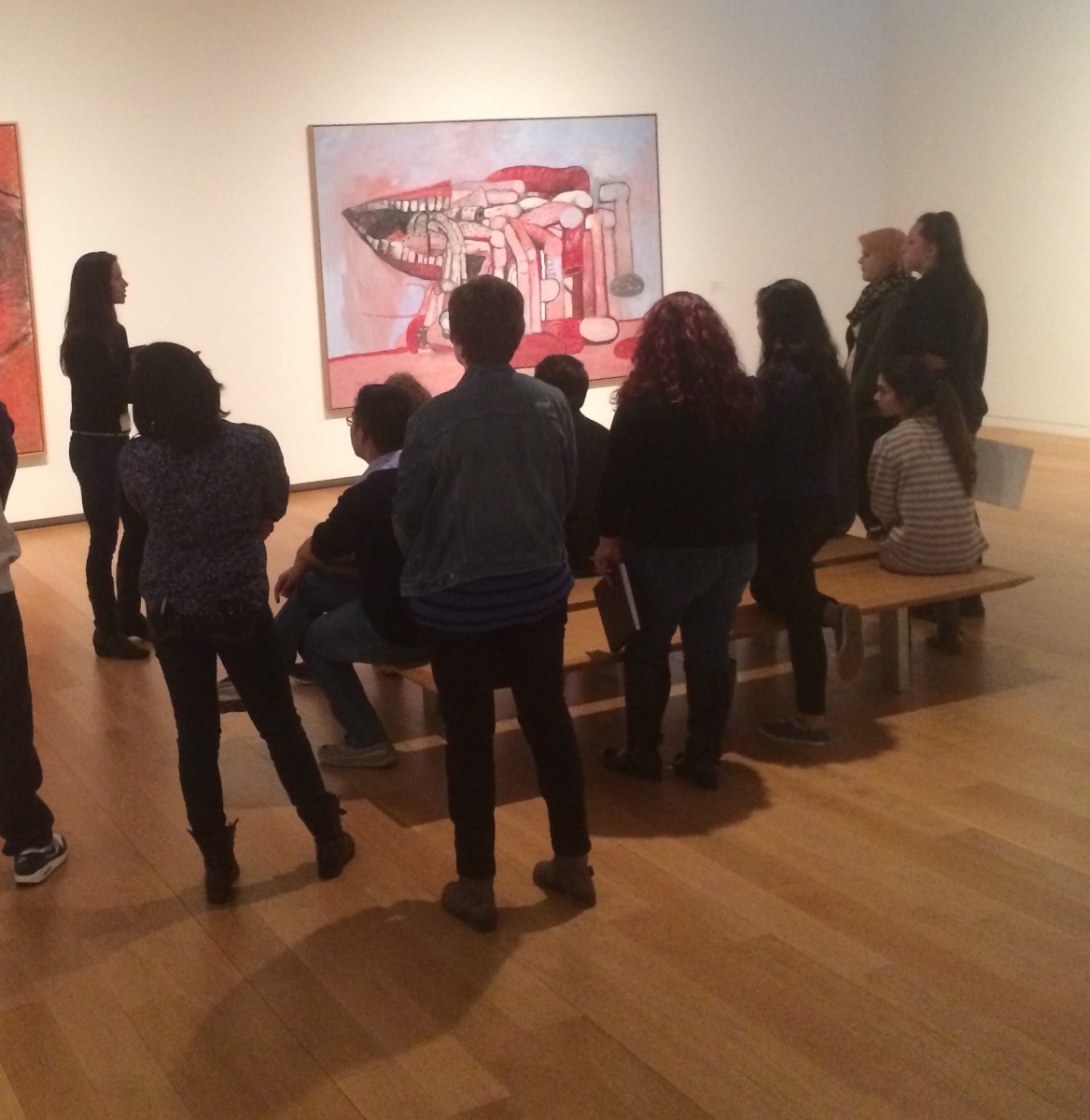 Michelle explained the historical background of the works, then facilitated a conversation about the method of paint application and composition. Guston’s pantings reveal a keen eye for structuring pictures. 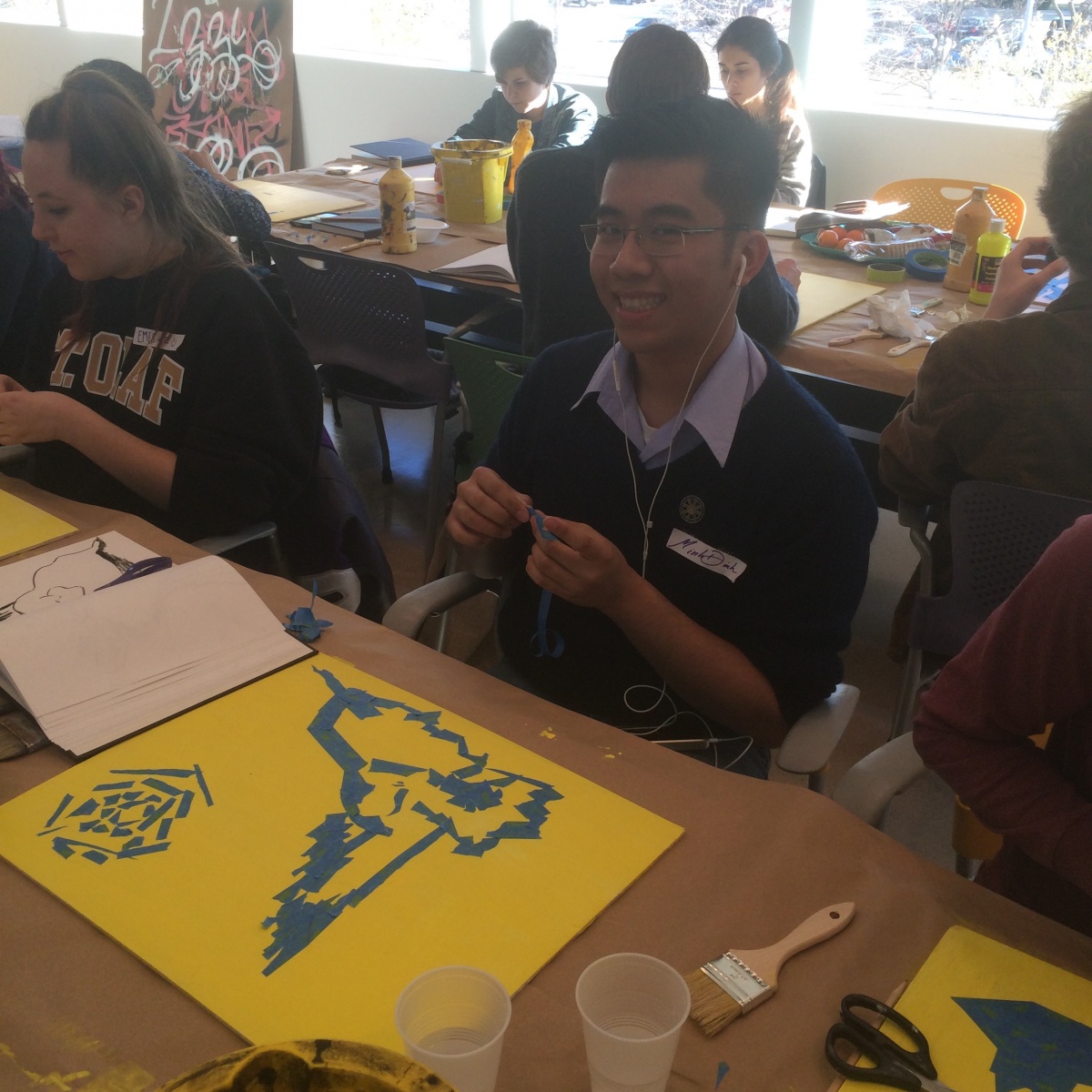 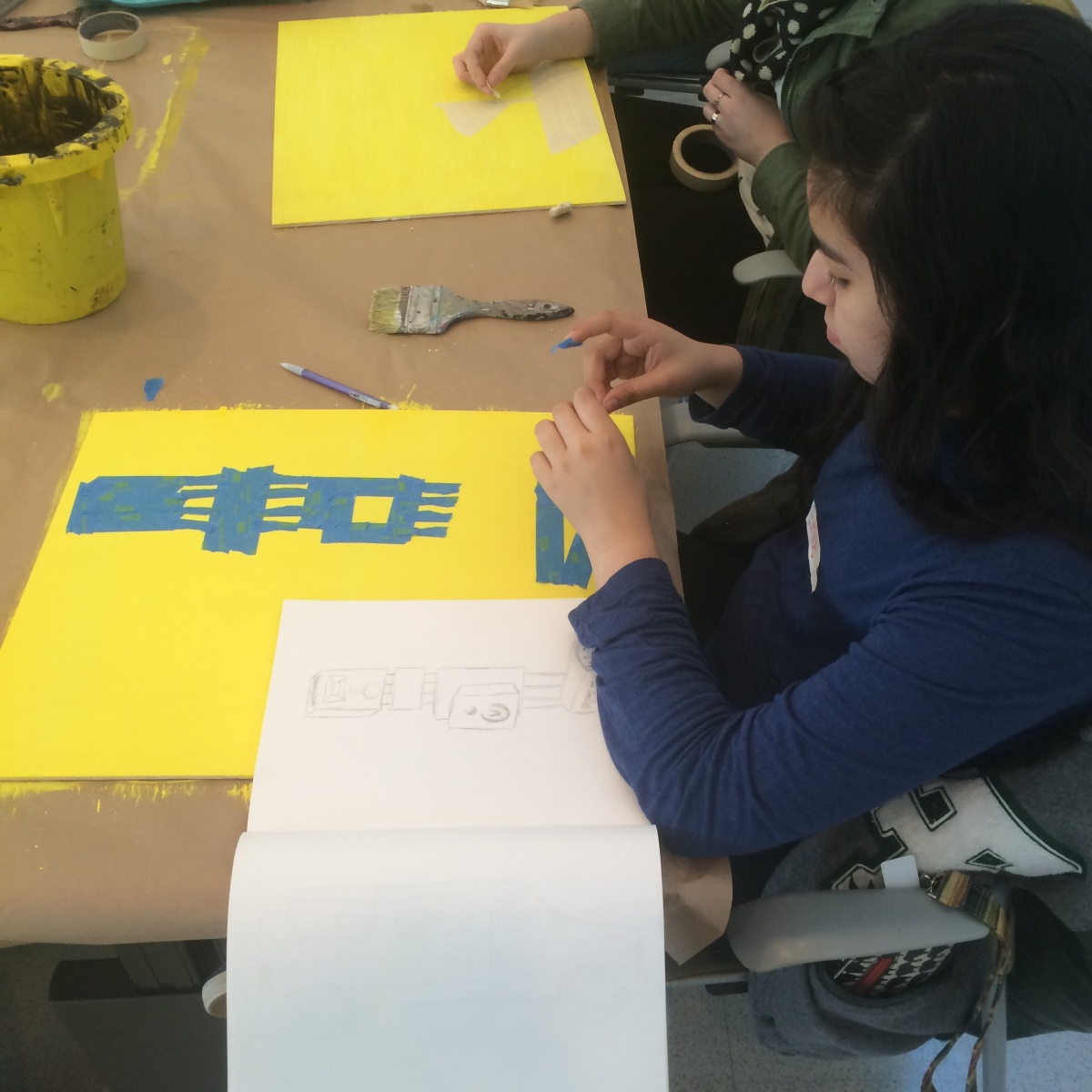 Students spent time cutting and trimming their pieces of painter’s tape to create the “drawings” on their panels. Once everyone had blocked out their forms in tape, Michelle asked each student to cover their entire board with blue paint. 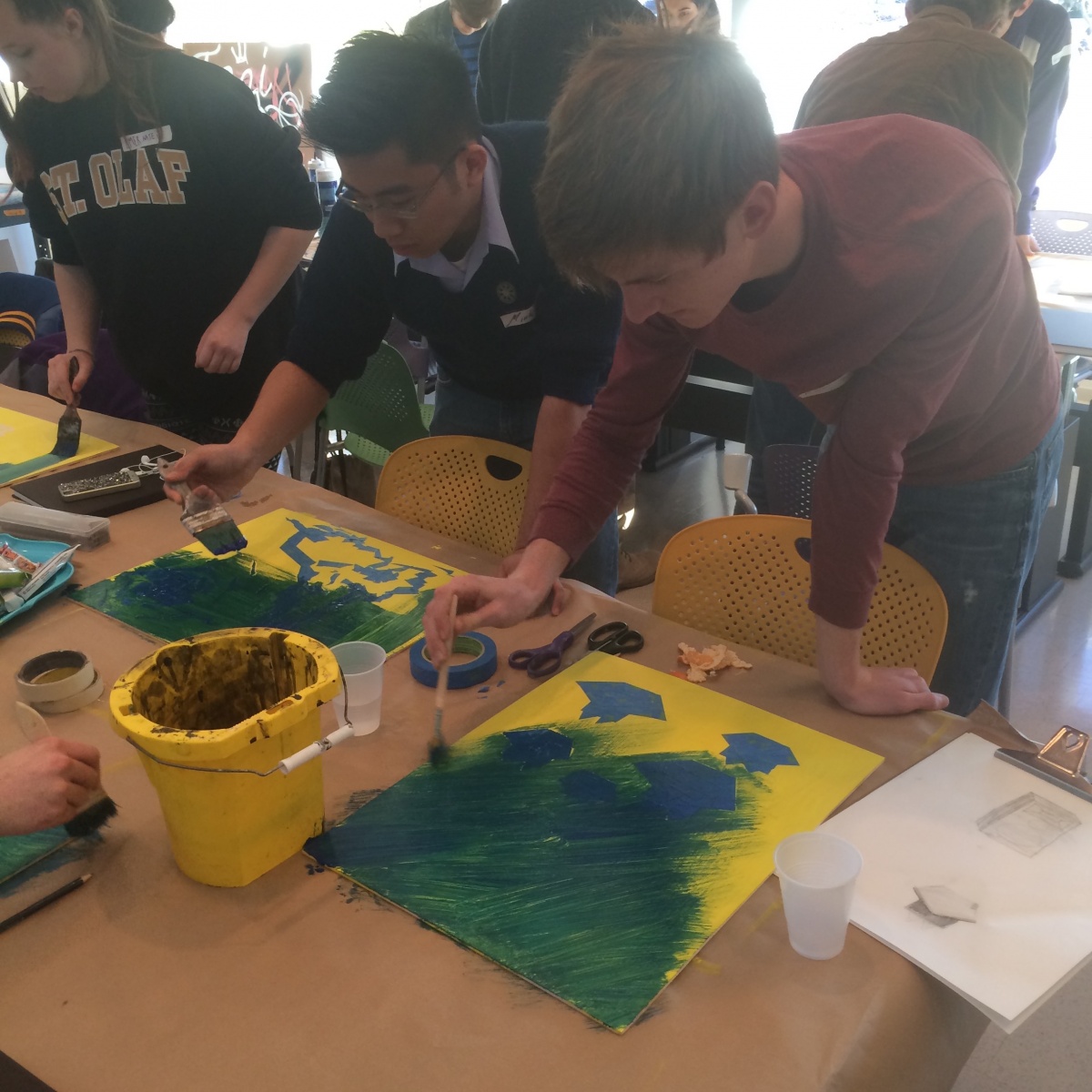 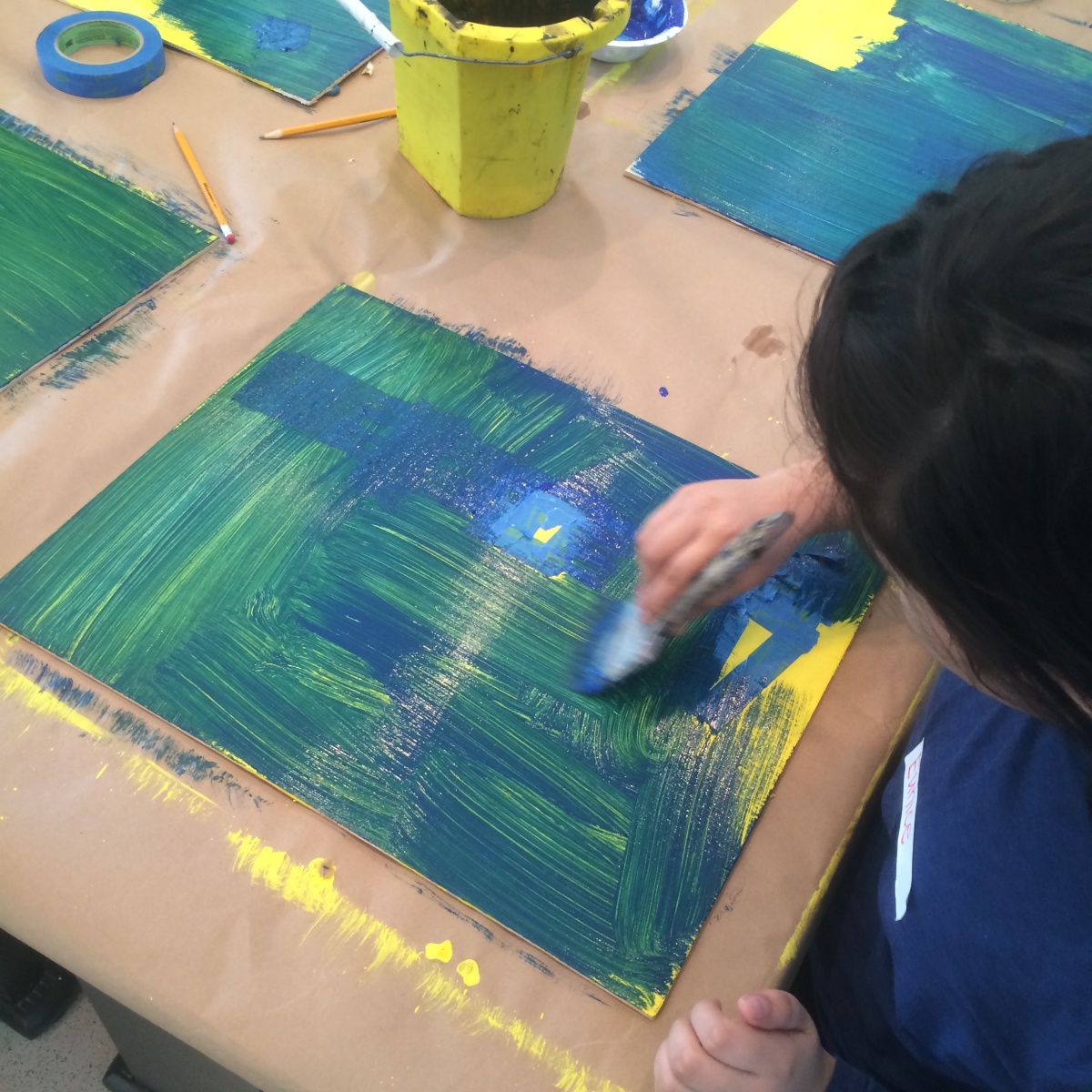 After the paint dried, the students were instructed to paint a different element on top of the existing layer. Each teen was given yellow paint and a few minutes to paint an additional image. While they were allowed total freedom to paint as they saw fit, they were reminded of Guston’s compositional techniques. 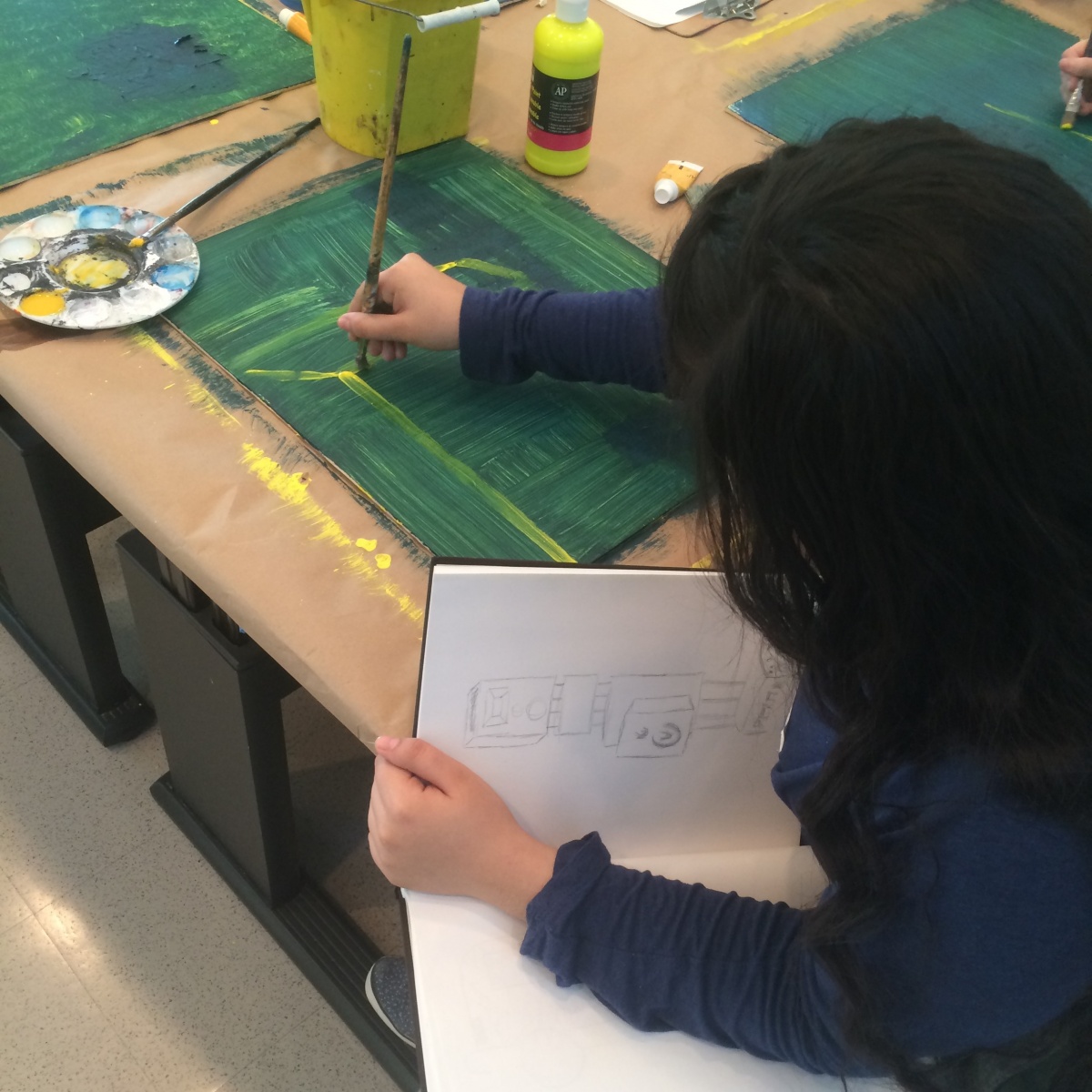 We headed back to the galleries to talk about Ross Bleckner’s seminal work Sanctuary, 1989, in the exhibition Urban Theater: New York Art in the 1980s. Michelle spoke in detail about the artist’s life and work, and then we addressed the painting techniques. She emhasized the importance of utilizing reductive processes in paintings to create really interesting surfaces. 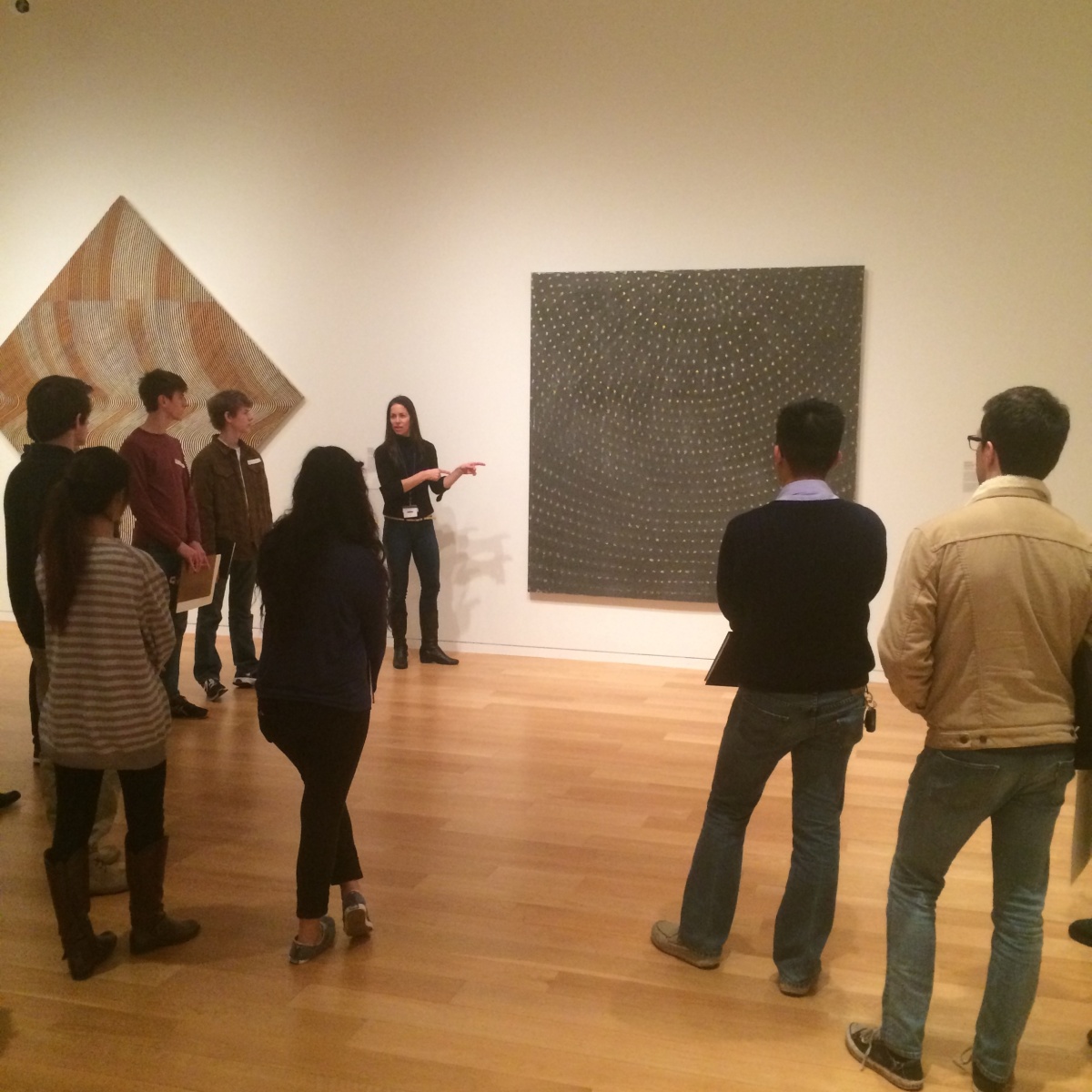 Once the students were back in class, they were instructed to remove the tape and look at their paintings. A few more minutes were allowed for students to paint, scratch, and sand into the panels before class concluded. 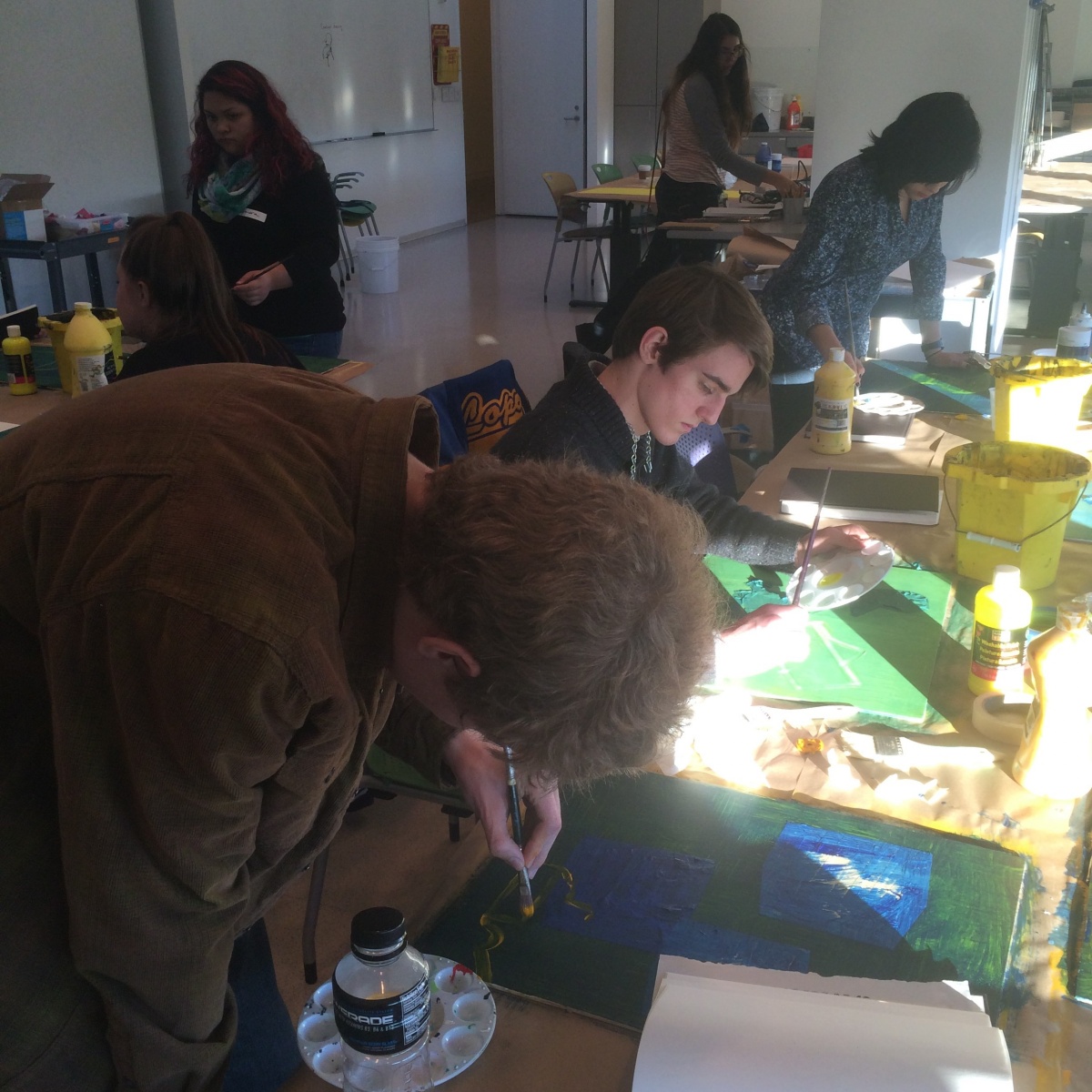 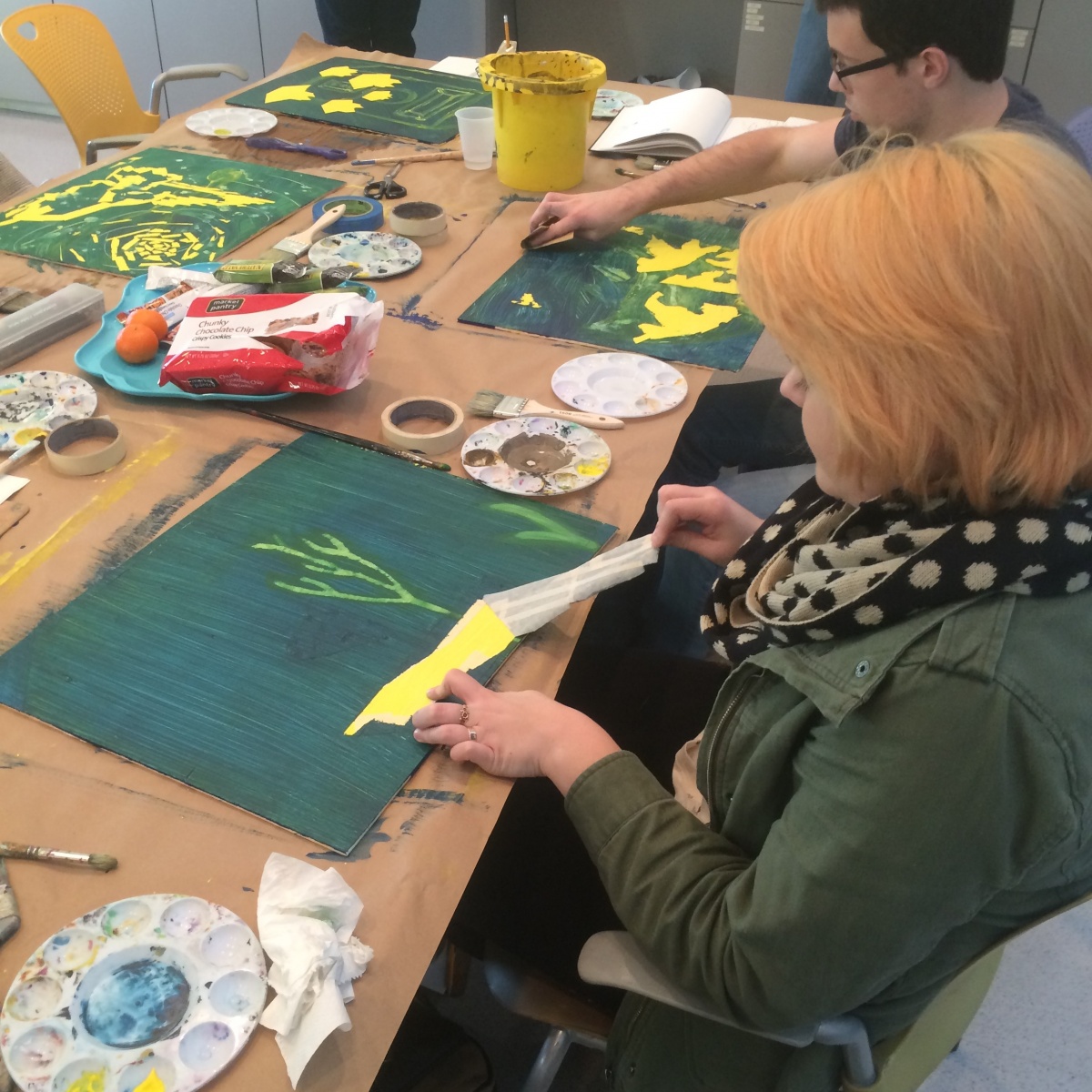 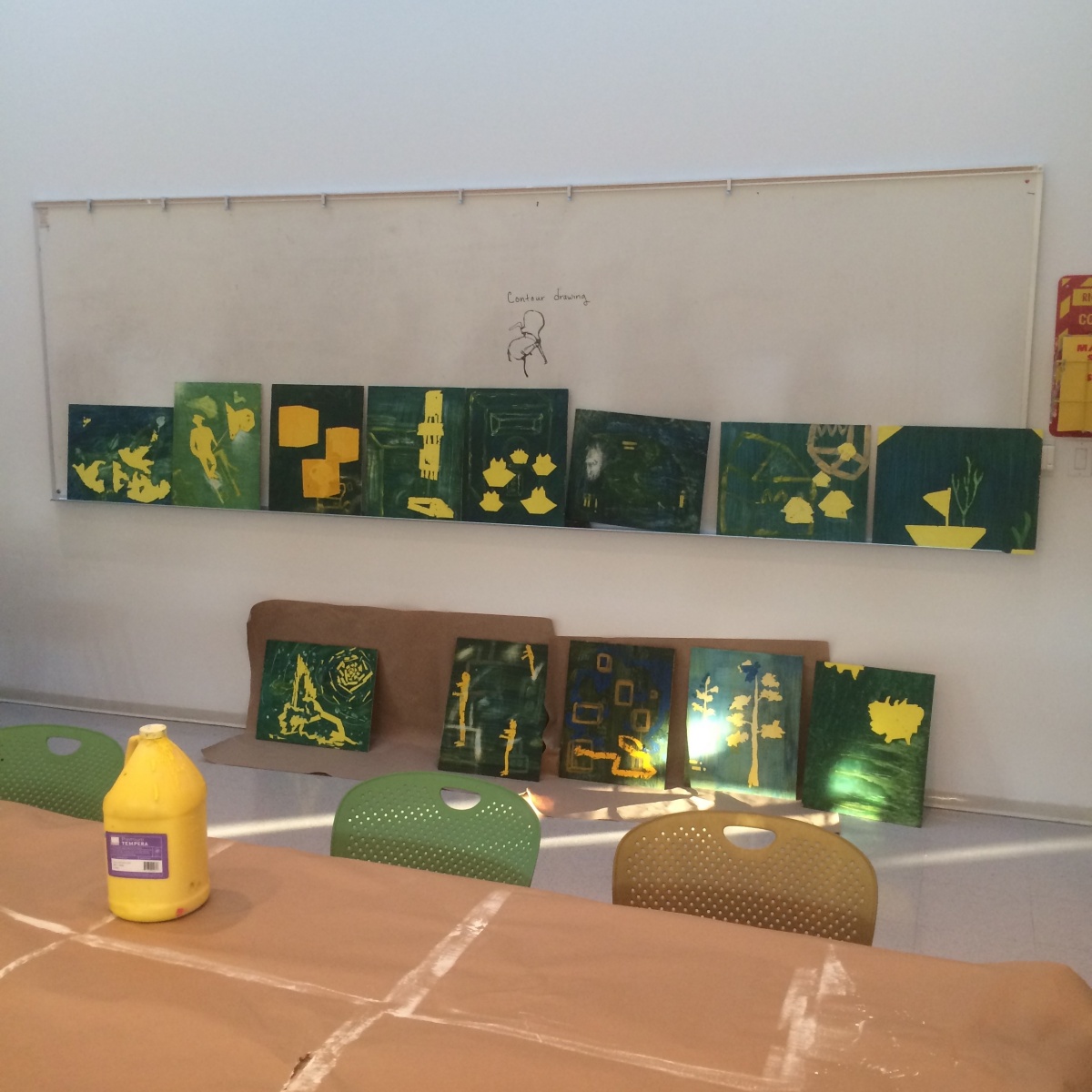 Each painting utilized the new techniques and reflected the influence of the works studied in the galleries. The teens had a blast working with Michelle, and the day concluded with a great class portrait. 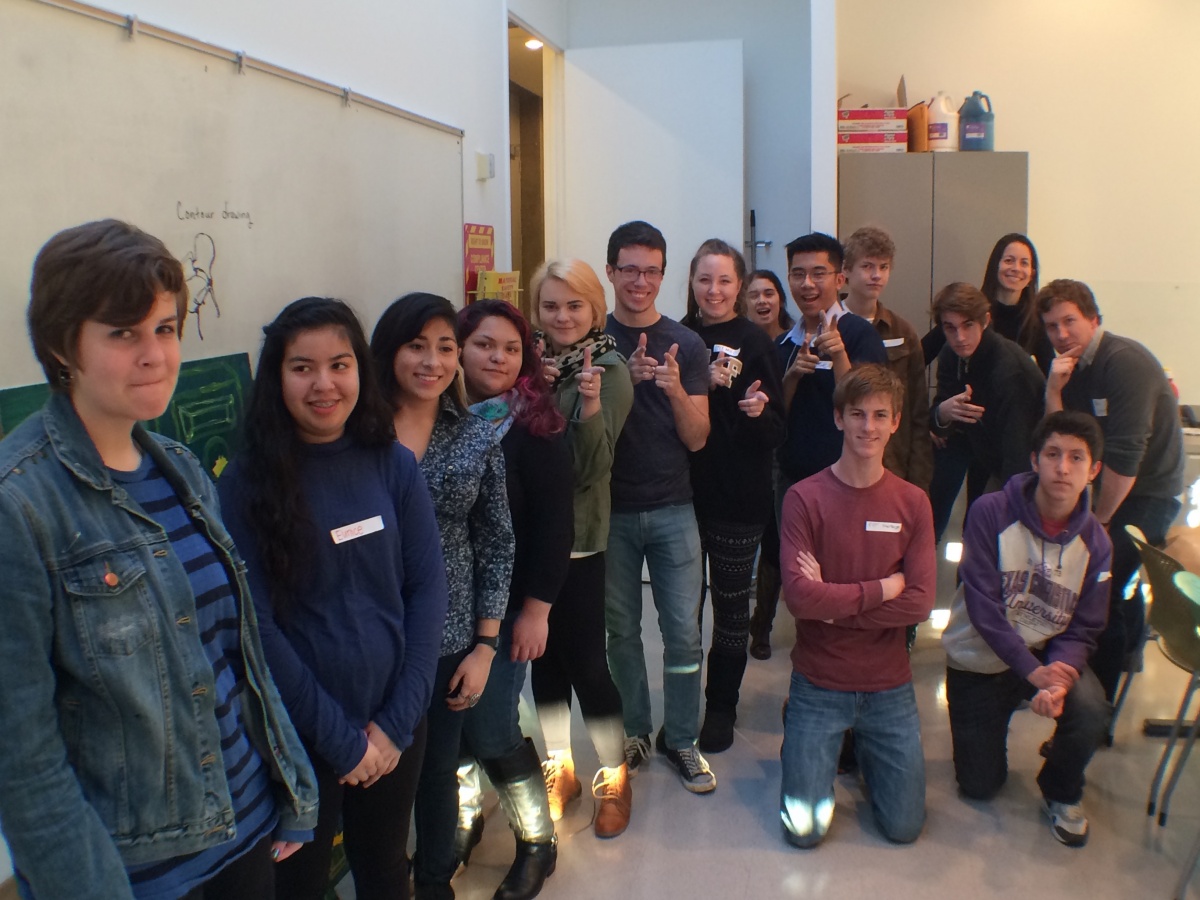