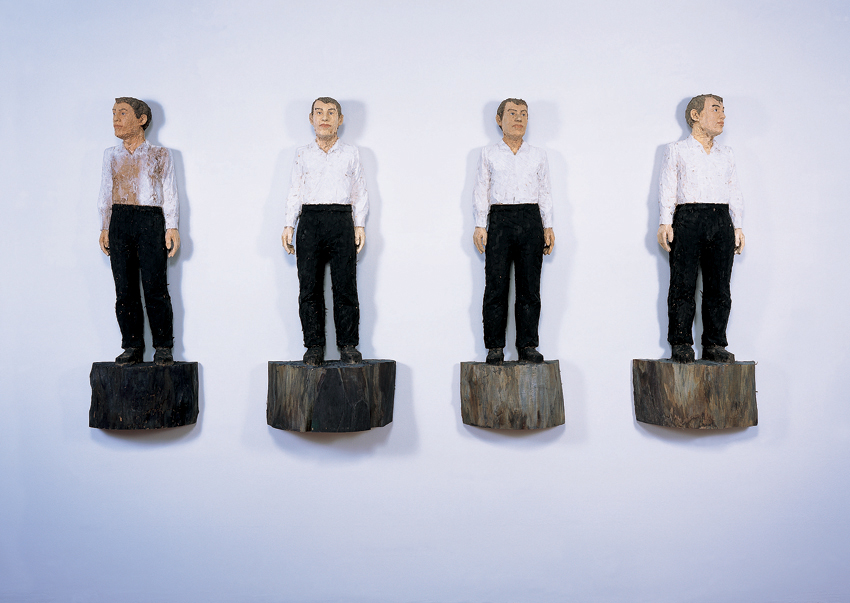 In 4 Figures, 2000, Stephan Balkenhol depicts four versions of the same rudimentary but realistically rendered modern Anglo man. Each figure is scaled down, and has an unevenly painted surface—the effect of using a broad paintbrush, which leaves much of the natural wood exposed. 4 Figures is characteristic of Balkenhol's work, visually and in its connections to the German woodcarving tradition and to sculpture's classical past. In this work the artist not only pays homage to the history of sculpture, but also critiques it with humor and irony. Rather than commemorating a hero, like typical sculpture from antiquity through the Renaissance and beyond; or beautifully and smoothly crafting a religious scene or icon, like traditional German woodwork, Balkenhol roughly chisels wood to depict ordinary people.

From 1976 to 1982 Balkenhol studied art at the Hockschule für Bildende Künst in Hamburg, Germany, where the staff included the influential artists Nam June Paik, Sigmar Polke, and the young artist's major professor, Ulrich Rückriem, known for his contributions to Minimalism. Notably, figuration was taboo when Balkenhol was a student; in keeping with the times, his professors in Hamburg were focused on Minimalism, Conceptualism, and Process-oriented artmaking. But during the 1980s, when Balkenhol matured as an artist, a figurative presence in the art world reemerged.

Balkenhol removes his work from the realm of portraiture, and even from reality, depicting familiar yet anonymous people whose stories are undisclosed, and by altering scale to create figures that are larger or smaller than life-size. This visual device helps capture our imagination in a way that life-size sculpture cannot. His use of repetition has a similar effect—seeing the face and plain clothes four times makes the man seem more generic, diluting the impact of individuality and leaving the question of his personal, psychological, and emotional state open-ended.