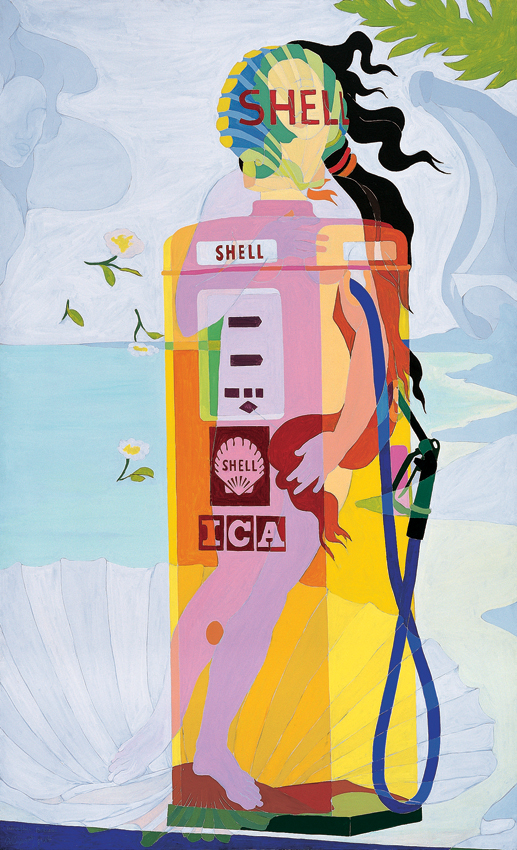 Between 1962 and 1964, Alain Jacquet created his Camouflage series, to which Camouflage Botticelli (Birth of Venus), 1963–64, belongs. For this piece Jacquet reproduced Sandro Botticelli’s important Renaissance painting(1) of a curvaceous, nude Venus with flowing golden hair, posed on a floating cockle shell, and he overlaid it on a gas pump that bears the word “Shell,” complete with the oil corporation’s scallop-shaped logo. Jacquet makes a humorous connection between Venus—the shell being one of her attributes, according to Roman mythology—and the corporate logo. Other paintings in the Camouflage series are based on works by Michelangelo, Piet Mondrian, Roy Lichtenstein, Giorgio de Chirico, and (moving from the art to the entertainment industry) Walt Disney. Each work contains its own flip visual pun, and Camouflage Botticelli is the masterwork of the group.

Although he is not directly associated with the small group of French artists from the 1960s known as the Nouveaux Réalistes, or with American or British Pop art of that decade, Jacquet shares close affinities with both movements. His ironic use of the everyday—advertising and corporate logos—and his play on mechanically-reproduced imagery makes his art a kind of commentary on the way commercialism affects contemporary culture. These qualities especially align him with his Pop and Nouveau Réaliste contemporaries, with whom his work has been exhibited numerous times throughout Europe and America.