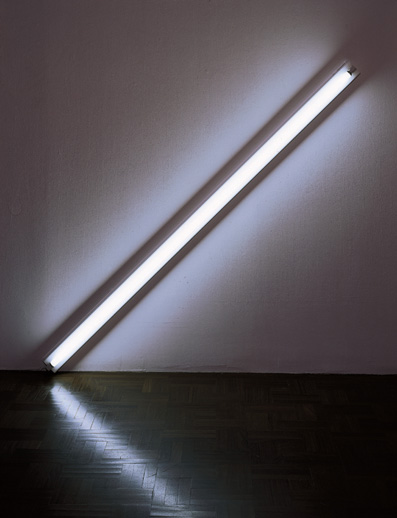 Although Dan Flavin is invariably described as one of the patriarchs of Minimalist sculpture—along with his colleagues Donald Judd, Sol LeWitt, Carl Andre, and Robert Morris—he has generally rejected the appellation "Minimalist" and even the term "sculpture" as too confining a designation, often pointing out that his works are ephemeral, temporary, and installed in relation to given architectural conditions. Flavin began making his signature works of industrially prefabricated fluorescent tubes and fixtures in 1963. Emanating different colors of light, Flavin's installations have an indeterminate volume and appear virtually without mass, and it is true that their ethereal presence remains distinct from the emphatic physicality of most Minimalist sculpture. A more rigorous connection can be seen with Marcel Duchamp’s Readymades, which offer an important precedent for Flavin's off-the-shelf materials and his reliance on the common, found object. Like Duchamp, Flavin considered his works to be "proposals" rather than sculptures, part of a system of investigations rather than static objects.

Diagonal of May 25, 1963, 1963 is one of Flavin's first and most important investigations into the formal possibilities of using standard fluorescent light fixtures in commercially available colors. The image of the diagonal was a critical early theme executed by the artist, in series and according to simple mathematical configurations. Flavin made a number of diagonal "proposals" in different colors, alternating their angles from right to left. Flavin executed the first diagonal in gold light, subsequently making diagonals in green, yellow, and red. The Museum's Diagonal of May 25, 1963 may be the most conceptually and formally pure work in the series: pure white, ultraviolet light.

In his 1965 essay "'...in daylight or cool white.' an autobiographical sketch," Flavin refers to the Diagonal of May 25, 1963 as a "diagonal of personal ecstasy" describing its "forty-five degrees above horizontal" position as one of "dynamic equilibrium." The artist envisioned the diagonal as a contemporary symbol that "in the possible extent of its dissemination as a common strip of light or a shimmering slice across anybody's wall, had the potential for becoming a modern technological fetish."(1)