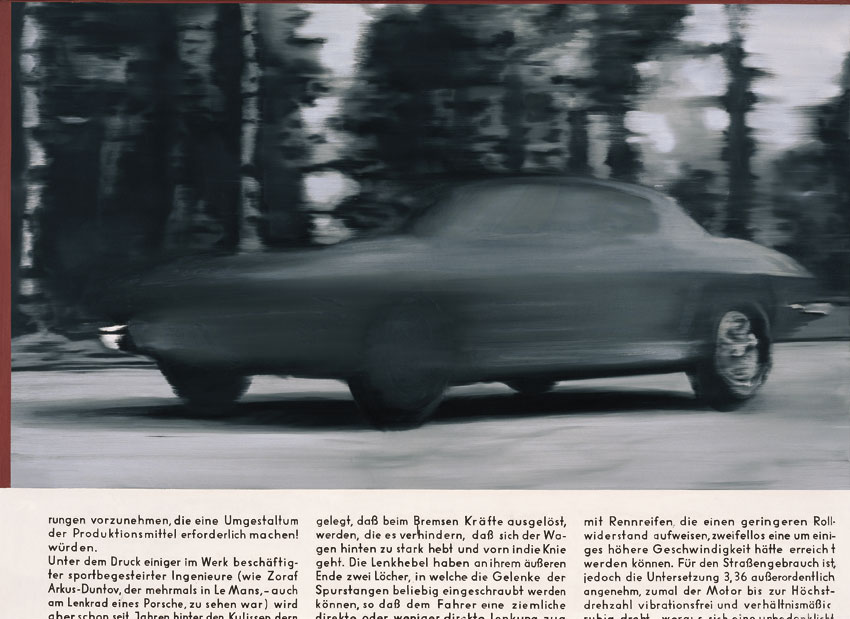 If there is a continuity in Richter’s art, it is to be found in a finely-tuned dialectic that counterposes the seemingly irreconcilable opposites of subjective expression and objective analysis, and the mechanical versus the handmade. Richter seldom works directly from a subject, preferring the mediation of a photographic image. A majority of the artist’s imagery (including many of his early abstractions) is derived from photographs, which he has kept in his “atlas,” a vast private archive of photographic images taken by Richter or clipped from newspapers and magazines. Each of these images projects its own anomalous message peculiar to Richter’s strangely oblique view of “reality.”

Born in the former East German city of Dresden in 1932, Richter immigrated to West Germany in 1960 and enrolled in the Staatliche Kunstakademie Düsseldorf in 1961. He was immediately attracted to the experimental performances and installations of the Fluxus movement, led by George Maciunas and Joseph Beuys. Of equal if not greater importance, however, was his first exposure to American Pop art by Andy Warhol and Roy Lichtenstein. In 1963 Richter and a small group of art students—Sigmar Polke, Manfred Kuttner, and Konrad Lueg (who later became the art dealer Konrad Fischer)—organized what they called “the first exhibition of German Pop art” in a rented storefront in Düsseldorf. They dubbed their movement “Capitalist Realism,” a term that satirized Social Realism in the East (and its restricted approach to artistic expression), as well as the highly capitalist nature of American Pop art. Richter’s subsequent approach to “realist” painting would also be infused with irony.

Ferrari, 1964, encapsulates many of the issues that Richter would explore in his Capitalist Realism phase. The painting depicts a Ferrari automobile (what appears to be the 400 Superamerica model, initially developed in 1962) as it was photographically reproduced in a German car magazine. Richter’s image questions the very definition of realism. The reality of Richter’s Ferrari is not that he is depicting a car from “life,” but a photographic image from a magazine; in effect, reproducing a reproduction, in this case by hand.

Images of automobiles are not uncommon in art produced after World War II, and to some extent Richter’s laborious representation reflects the widespread impact of mass-produced automobiles on society in the 1950s and early 1960s, as well as visual artists’ increasing interest not only in popular subject matter, but in the use of mass advertising. . . . Richter’s choice of a Ferrari—one of the most prestigious names in auto racing at the time—is also significant. Richter painted Ferrari during the time of Germany’s Wirtschaftswunder, or swift economic reconstruction. Thus, the Ferrari could be interpreted as an icon or symbol of economic power and affluence.

Ferrari is a classic example not only of European “Pop” art, but also of Richter’s epistemological approach to painting, in which abstraction and realism collide. A significant aspect of Ferrari is its bold introduction of a theme and technique that would be a central element in all of Richter’s subsequent work. Although presented in a photorealist style, the image is blurred almost out of recognition. . . . In this case, blurring has the ironic effect of abstracting the image of the car at the same time it enhances the realistic suggestion of a car in motion. At their best, Richter’s images present a kind of paradox, in that they reproduce a given reality in what appears to be a perfectly objective manner, and yet they convey a distinct impression of the uncertainty of that objectivity.

Over his approximately forty-year career, landscape has been a recurring element of Richter’s imagery. Specifically, the artist has focused on a group of combinations of majestic natural phenomena, including images of land and sea, clouds and sea, clouds and sky, mountains and sky, and rainbows and icebergs. Among the artist’s most mysterious seascapes is Seestücke—Welle (Sea Piece—Wave), 1969, a dramatic image of clouds and sea. The bottom quarter of the canvas depicts a vast plane of ocean, where a single wave is about to break, throwing mist into the air. The upper three-quarters of the canvas is dominated by ominous dark clouds that reveal an opening to a distant space where either sun or moon projects a hazy, far-off glow.

In its general compositional format and subject matter, Sea Piece—Wave invokes the tradition of the sublime as subject matter for painting, and specifically the paintings of the nineteenth-century German Romantics, such as Caspar David Friedrich. Friedrich’s famous painting Monk by the Sea, 1809–10 (Schloss Charlottenburg, Berlin), which depicts a small figure staring out toward a vast and turbulent ocean, is often considered an icon of German Romanticism and of the philosophy of Edmund Burke and his concept of the sublime. The common denominator in all discussions of the sublime is the attempt to come to terms with limitlessness. Richter has commented, “A painting by Caspar David Friedrich is not a thing of the past. What is past is only the set of circumstances that allowed it to be painted, specific ideologies, for example . . . . it is therefore quite possible to paint like Caspar David Friedrich ‘today.’”(1) However, he has also qualified such statements, suggesting that his paintings reveal elements of irony and loss that distinguish them from those of Friedrich’s, stating, “If the Abstract Pictures show my reality, then the landscapes and still lifes show my yearning,” further pointing out that he is motivated by “the anachronism in them” that “takes on a subversive and contemporary quality.”(2)

The portrait Ema (Nude Descending a Staircase), 1992 is, in its own way, as mysterious and unlocatable as Sea Piece—Wave. Ema also began as a photograph, in this case a slightly blurry full-length nude portrait of the artist’s first wife descending a staircase. The image was subsequently translated into a painting. Finally, Richter photographed the finished painting, creating a full-size photograph of a painting from an “original” photograph. In part, Ema refers to Marcel Duchamp’s infamous Nude Descending a Staircase, 1912 (Philadelphia Museum of Art), which scandalized the 1913 Armory Show in New York. Duchamp’s cubo-futuristic image was inspired by Étienne-Jules Marey’s experiments in sequential photography. . . . Richter acknowledges that Duchamp was an influence in his making of Ema, but negatively, “because his painting Nude Descending a Staircase rather irritated me.”(3) In a very personal subject through three layers of reproduction (two of them mechanical), Richter ironically embraces the mechanical eye, while refuting Duchamp’s mechanistic aesthetic. Ema emerges as a sensuous but ghostly apparition. As in the case of Sea Piece—Wave, there is a powerful fragility to Ema’s presence.