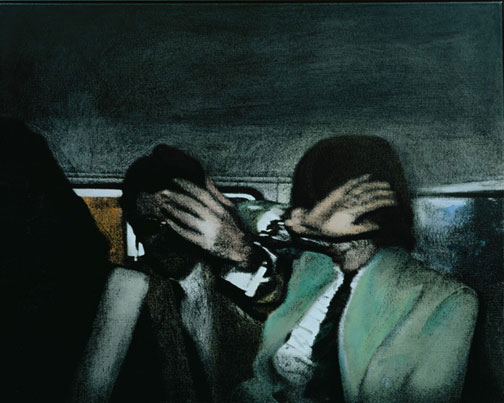 In February 1967, Mick Jagger, the lead singer of the Rolling Stones, was arrested at a party in London on drug-related offenses. Arrested alongside Jagger was the well-known cultural guru Robert Fraser—Richard Hamilton’s art dealer—resulting in a high-profile, media-fueled event. When Jagger and Fraser arrived handcuffed in a police van at the courts for sentencing, press photographers attended in droves. One of the resulting photographs, shot through the van’s window by John Twine, was used by Hamilton in a series of six paintings he titled Swingeing London.

Hamilton, one of the earliest pioneers of Pop art, was a champion of pop culture in all its forms. In his words, he “felt a strong personal indignation at the insanity of legal institutions which could jail anyone for the offense of self-abuse with drugs.” The title Swingeing London combines a reference to London’s popular designation as “The Swinging City” with a reported statement by the judge presiding over the hearing that, “There are times when a swingeing [severe] sentence can act as a deterrent.”

Hamilton created Swingeing London by silkscreening an enlarged and retouched version of the press photograph over a conventional oil painting. The work not only reflects the melding of art and music cultures that occurred in the 1960s in London, but also signals the end of the permissiveness and freedom that had characterized the city during that decade.