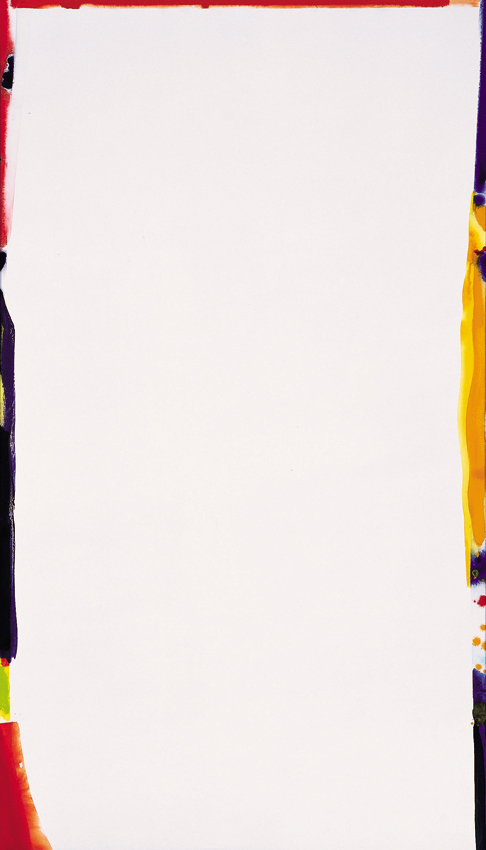 In 1944, at the age of twenty-one, the American artist Sam Francis began painting while in an Army hospital in Denver, where he was recovering from a United States Air Corps flight-training emergency landing that led to spinal tuberculosis. This experience of painting from his hospital bed had a fundamental and lasting impact on his work—it made him focus on the flat space of a canvas and the challenge of creating illusion within it. [His] early works were mostly portraits and landscapes, but as he regained his health and became more immersed in painting, his style evolved toward abstraction. In the 1950s Francis traveled extensively, and by the latter part of that decade he maintained studios in Los Angeles, Paris, and Tokyo. These cities figure prominently in his work: His canvases often relate to each one's distinct culture, landscape, and light.

Untitled from Mako Series, 1967, was created while Francis was primarily living in Japan. He began the Mako Series in 1966, one year after marrying his third wife, Mako Idemitsu, whom he met in Tokyo. Like all of the works in this series, Untitled characterizes Francis's midcareer style. The works of this period came to be known as "edge paintings." Untitled is a pristine white painting with narrow slivers of color surrounding its perimeter. The bright, masked-off areas of red, yellow, blue, orange, pink, and green, when juxtaposed with the stark white center, create a complex dynamic. Although the ratio of white to color is imbalanced in favor of white, the wedges of saturated pigments along its borders visually compete for dominance, advancing within the pictorial space.

Japanese aesthetics helped establish the particular vision seen in Untitled, especially the way Francis addressed scale, space, and color. Rather than relating to Tokyo as an urban hub, however, the spaciousness of Untitled suggests the openness of light, sky, and sea around Japan, and it incorporates the idea of balanced opposites seen in Japanese landscape. The subtle and spiritual qualities of Japanese landscape, in which emptiness is not a void, but rather an integral space, extends to Francis's cool, crisp canvases with white centers. In Untitled, whiteness creates a contemplative, well-defined space that is balanced with color.