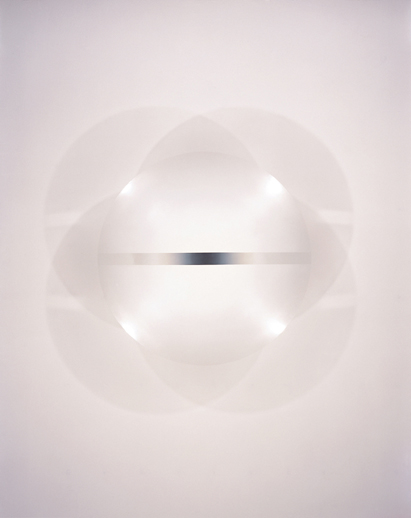 Untitled dates from a crucial moment in Robert Irwin’s career when his perception of art, and of perception itself, were being reshaped. His concerns led him in 1966 to the convex disc format, which resulted in the body of work that gained him an international reputation. Irwin has explained that he adopted the circular shape because the traditionally rectilinear format of painting no longer made sense to him.

Formed of acrylic resin, Untitled is a convex disc that projects, by means of a clear plastic tube, twenty-four inches from the wall. Multiple coats of a white hue have been spray-painted onto the disc’s surface. As the opaque paint moves toward the edges, it thins to transparency. A three-inch band divides the circle in half, and four floodlights bathe the object in light. The disc, wall, light, and shadows merge to offer a shifting sense of palpability and indeterminacy, and a play between the real and the illusionistic. The method by which Irwin treated the surface of the disc, installed it, and lit it allowed him to produce a work that appeared to dissolve into its environment, in his words, "more or less transcending painting." Untitled is less an art object and more a site/sight for experiencing the beauty, wonder, and complexity of visual perception.