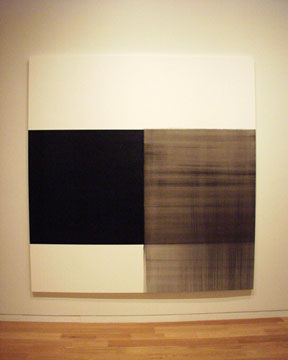 This painting by Callum Innes began as a monochrome, with dense layers of black oil paint covering the middle section of a primed white canvas. What appears as a soft veil of color is actually the remains of a carefully unpainted block of canvas. Taking a turpentine-soaked brush, the artist allowed the solvent to run down the surface of one painted section, leaving a ghostly trail of paint and exposing the support underneath. Innes’s exposed paintings, a series he has explored since the early 1990s, take their specific titles from the color of paint used in their creation. These familiar titles, seen on many a tube of store-bought paint, belie the fact that Innes uses traditional methods to mix his own colors, a process that allows him to obtain the precise hue he desires for each work. The term “exposed” refers not only to the exposed canvas, but also to the artist’s activity in the studio, which can be discerned from the evidence left behind in the works themselves.

Innes was born in Edinburgh, Scotland, where he lives and works today. Capturing the optical properties of his home environs, he creates works that convey a specificity of place and a gentleness of touch unique from the Minimalist paintings to which they are often compared. Innes’ formal approach and seemingly simple means of covering the canvas bring to mind Minimalism. Yet within these strict boundaries, the artist unmistakably introduces his own hand and the elements of chance and time. Emphatically not simply the objects themselves, his exposed paintings are records of studio activity, evidence of creation itself, carefully orchestrated by the artist to communicate with the spectator. Standing before Exposed Painting Mars Black, a viewer can easily work backwards from the finished work to the artist’s point of departure—a blank canvas. In this way, the work remains in a constant state of making and unmaking, appearing and disappearing, perpetually alive.