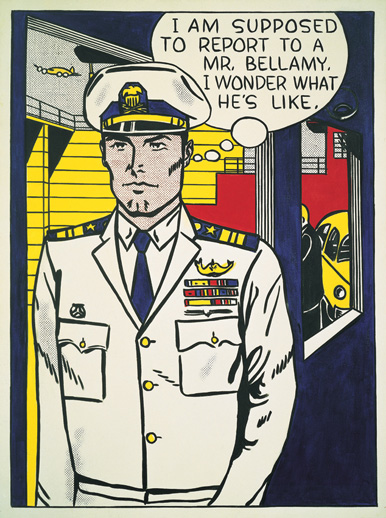 Roy Lichtenstein’s comics-based compositions rival Andy Warhol’s images of Campbell’s Soup cans and Marilyn Monroe as the best known and most influential examples of Pop art. Lichtenstein’s comic-book paintings, such as Mr. Bellamy, 1961, have attained such renown and familiarity that it is easily forgotten that they were produced only briefly (1961–65) and that, as part of his early Pop work, they provoked tremendous controversy.

To imitate a comic book as directly as Lichtenstein did in Mr. Bellamy was to invite controversy. Although substantially larger than its source, the painting appeared to be a mere copy, lacking artistic originality and creativity. Further, Lichtenstein reproduced a reproduction of the lowest commercial and intellectual kind. In 1961 comic books were still tainted by the public outcry and Senate subcommittee investigations of the early 1950s concerning the perceived connections between comics and juvenile delinquency.

Mr. Bellamy shows a military officer, possibly a pilot (whose branch of service is not clear), wondering about the man to whom he is to report. As in his other works, Lichtenstein pulls the protagonist close to the front of the composition, but in this case he includes an atypical elaborate arrangement of forms behind the figure. The comic-book source for Mr. Bellamy is not known, but clearly the painting derives from such comics as All-American Men at War, from which he was appropriating images at the time.

Although the source for Mr. Bellamy has not been identified, it is certain, based on Lichtenstein’s other comic book–based paintings, that the artist modified the source in order to make a striking work of art. Typically he would eliminate distracting details and simplify and unify compositional forms in order to achieve immediate visual impact and coherence. He would transform what was essentially an illustrational mode into what he conceived of as the comic-book style.(1)