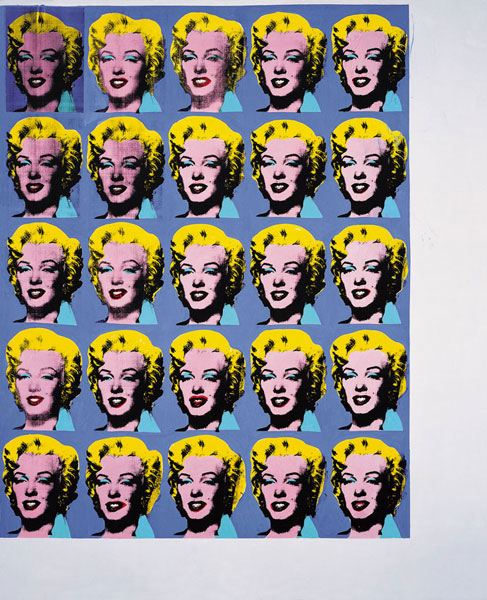 If you want to know all about Andy Warhol, just look at the surface of my paintings and films and me, and there I am. There’s nothing behind it. — Andy Warhol

Andy Warhol’s silkscreens and paintings of people, commercial items, and beyond have become icons of life in the twentieth century. The Campbell’s soup cans, photographs of celebrities, and images from newspapers that came to embody the ideas of Pop art all reflect Warhol’s interest in the power, beauty, and banality of popular culture. Within weeks of Marilyn Monroe’s suicide, Warhol began painting pictures of her, producing twenty-two paintings of Marilyn by the end of the year. Warhol chose a publicity photograph of Marilyn from the 1953 movie Niagara and cropped the image to a close-up of her face. The source for Twenty-Five Colored Marilyns is not necessarily Marilyn Monroe herself; it is a reproduction of the publicity photograph. In the Modern’s Twenty-Five Colored Marilyns, Warhol used the silkscreen process, then a popular method of commercial printmaking, to duplicate Marilyn's face. The uneven inking of the image translates her face with different degrees of clarity, and the tilt of the grid gives the piece a handmade quality. Warhol does not give us one Marilyn; he gives us twenty-five. Perhaps he wants us to consider our obsession with celebrities, or to suggest that more is always better, especially in the case of a celebrity with an already ubiquitous image. As a star created by and for film and photograph-even her stage name had visual and aural appeal-Marilyn Monroe existed as an embodiment of glamour, celebrity, and sex appeal. In creating works with Marilyn Monroe's image as the focus, Warhol asks us to consider how we attempt to embody or avoid these ideas ourselves.