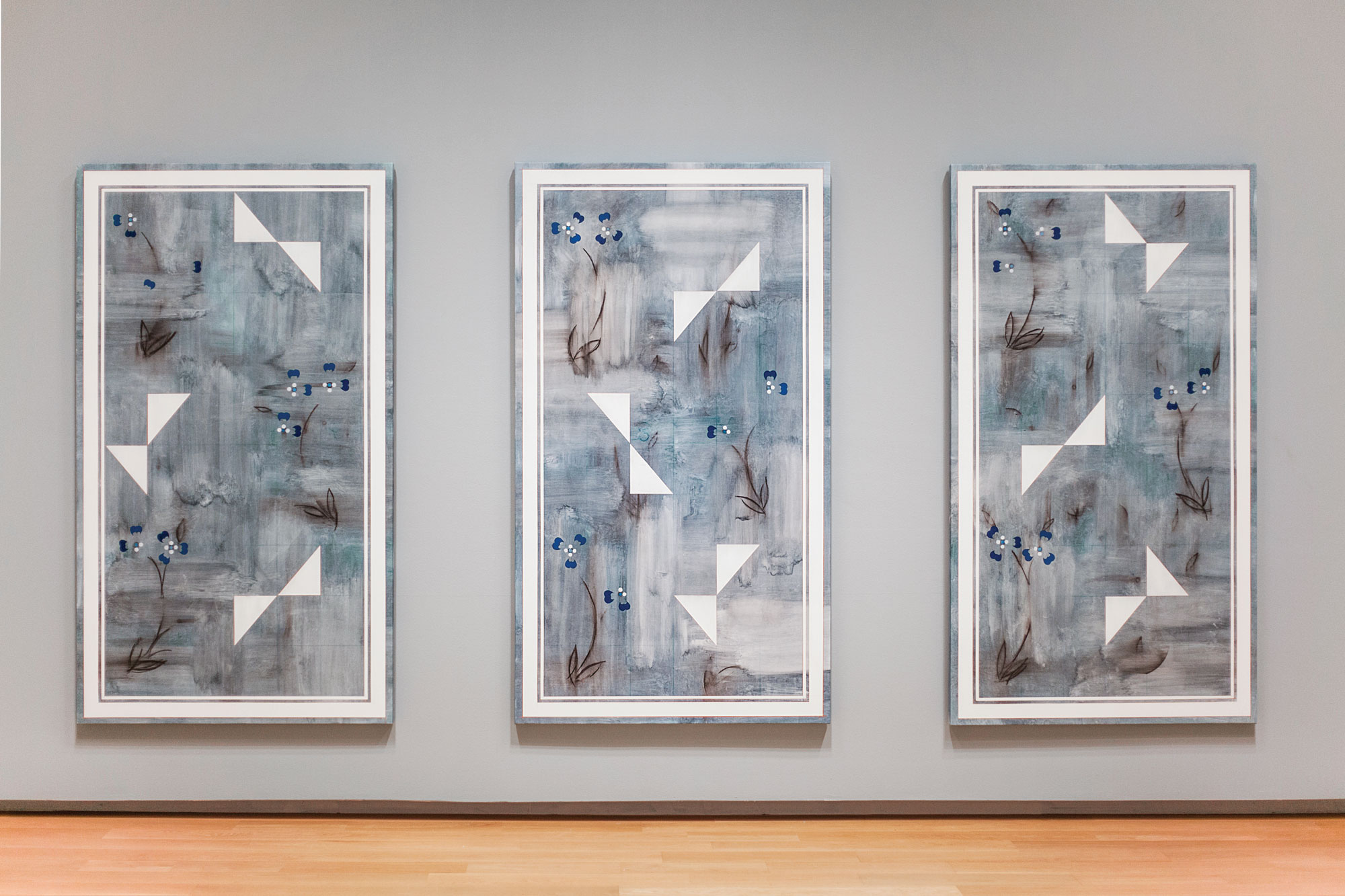 Kamrooz Aram
Ornament for Extraordinary Architecture, 2018
Oil, wax, oil crayon, and pencil on canvas
Three canvases, each 78 x 44 inches
Collection of the Modern Art Museum of Fort Worth, Gift of the Director’s Council and Museum purchase, 2018

Spanning painting, sculpture, collage, and installation, Kamrooz Aram's work investigates the complex relationship between Western modernism and classical non-Western art. By highlighting their formal connections, he reveals the typically downplayed role that non-Western art and design have played in the development of modernism and its drive toward abstraction. Challenging the traditionally Euro-centric narrative established by art history, Aram's work sets forth to disrupt this perceived hierarchy by merging and equalizing Western and non-Western forms. The artist will present all new work for this exhibition.
In the painting Ornamental Composition for Social Spaces I, 2016, the foreground features black and white triangles arranged on a grid. Triangles are found in pre-modern architecture, such as Persian stucco design from the thirteenth and fourteenth centuries, and modernism, such as Suprematist painting from the early twentieth century and mid-century Italian architectural ornament. Alongside the formal, hard-edged geometric structures, Aram's painting includes multiple red-hued floral motifs sourced from Persian carpets. By merging these forms, Aram elevates the traditionally decorative floral elements and proposes a more global and inclusive approach to abstract painting.
Aram's installations consist of sculpture, painting, and devices often used in museum exhibition display, such as pedestals, to point to the nature of exhibition design and how museological contexts influence the way viewers understand and approach the artworks presented. In the tableau A Monument for Living in Defeat, 2016, Aram playfully uses a painting as a backdrop, with the canvas partially obscured behind two small sculptures that are elevated on elegant wooden pedestals. This placement downplays the painting while emphasizing the sculptures, raising questions as to how we assign meaning and worth to certain objects based on how they are staged.
Kamrooz Aram was born in 1978 in Shiraz, Iran, and currently lives in Brooklyn. He received an MFA from Columbia University in 2003 and a BFA from the Maryland Institute College of Art in 2001. He has shown internationally and nationally, including solo exhibitions at the Museum Dhondt-Dhaenens, Deurle, Belgium; Green Art Gallery, Dubai; The Suburban, Chicago; LA><ART, Los Angeles; and the Massachusetts Museum of Contemporary Art, North Adams. Aram's work has been shown in many group exhibitions, including Beauty Reigns: A Baroque Sensibility in Recent Painting, McNay Art Museum, San Antonio, 2014; the Busan Biennale, 2006; Greater New York2005, P.S.1 Contemporary Art Center and The Museum of Modern Art, New York, 2005; and the Prague Biennale I, 2003. Public collections that include his work are The Metropolitan Museum of Art, New York; Cincinnati Art Museum, Ohio; and M+, Hong Kong.

Kamrooz Aram
Ornament for Extraordinary Architecture, 2018
Oil, wax, oil crayon, and pencil on canvas
Three canvases, each 78 x 44 inches
Collection of the Modern Art Museum of Fort Worth, Gift of the Director’s Council and Museum purchase, 2018