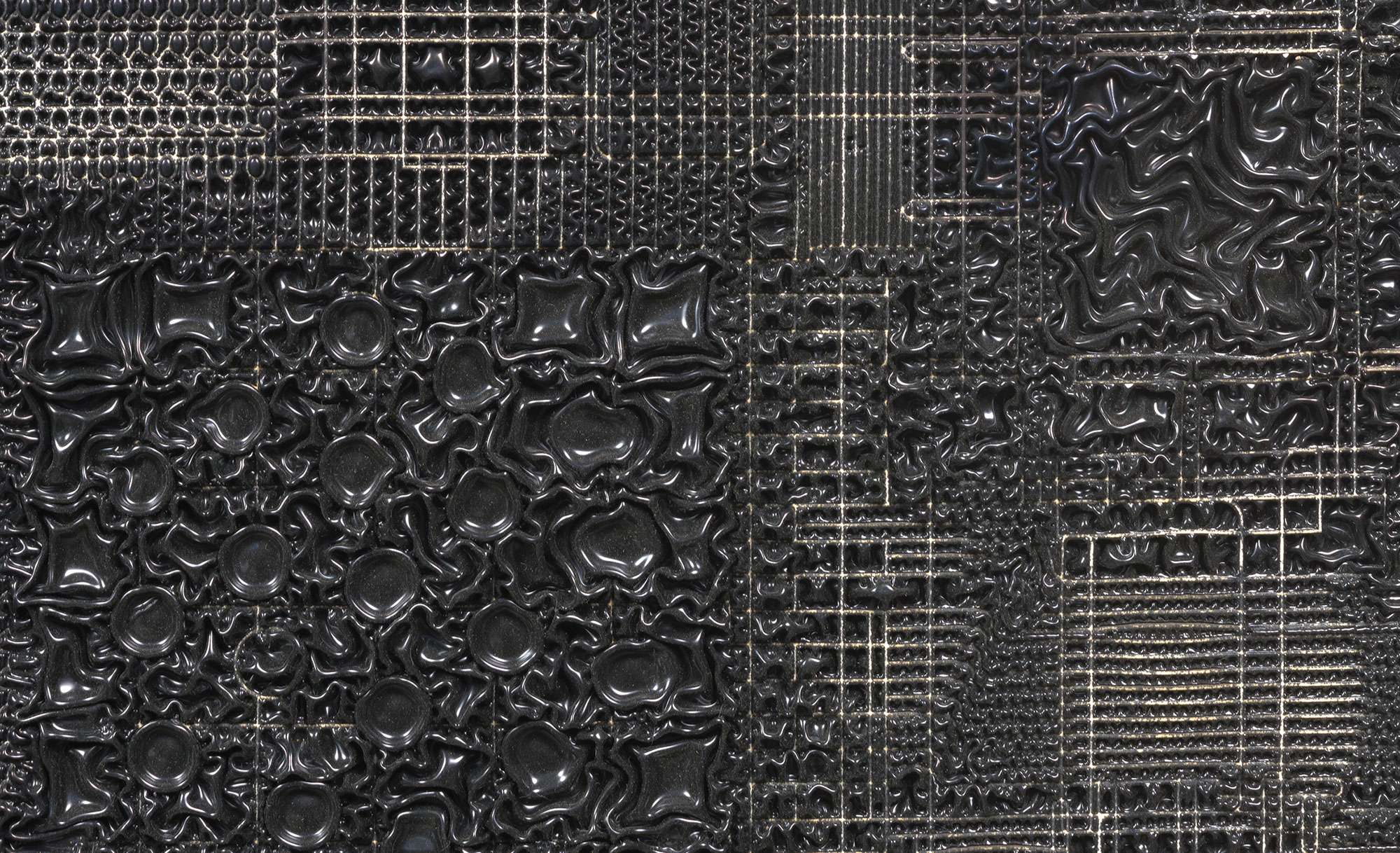 Los Angeles–based artist Analia Saban (b. 1980, Buenos Aires) takes traditional artistic media, such as paint, marble, and canvas, and pushes their limits in inventive ways that merge scientific experimentation with artmaking. In her Draped Marble works, Saban bends slabs of marble to the brink of destruction. Arced over walnut sawhorses, the fractured yet stable marble appears fragile and pliable. Alluding to the age-old idea of the artist turning something unbelievable into the believable, Saban’s marble works also make historical reference to the billowing fabrics rendered in the same material by Renaissance sculptors, such as those in Michelangelo’s Pieta.

Saban also dissects what painting has been known for and explores what it can be now. She often uses paint as a sculptural element to better understand the physical properties and boundaries of the medium. In her new series, Saban uses a loom to weave dried brushstrokes of acrylic paint within the linen’s wefts and warps, subverting the custom of paint on canvas to create works that hover between paintings and objects. The weavings often illustrate references to topics such as architecture or technology, while underscoring and reveling in the handmade characteristic of an artwork. Often engaging sculpture, painting, photography, printmaking, and textiles in a single piece or series, Saban blurs the distinctions between media, questioning the material and conceptual limits of a traditional artwork while revitalizing the notion of what art, or the process of making art, can be.

Analia Saban received a BFA in Visual Arts from Loyola University in New Orleans in 2001 and an MFA in New Genres at the University of California in Los Angeles in 2005. Her work has been exhibited widely both nationally and internationally, and has been included in exhibitions at Qiao Space, Shanghai; Blaffer Art Museum, Houston; National Gallery of Victoria, Melbourne; Los Angeles County Museum of Art; KIOSK, Ghent; deCordova Sculpture Park and Museum, Lincoln, MA; and Palais de Tokyo, Paris, among others. Saban’s works are represented in the collections of the Hammer Museum at UCLA; Museum of Contemporary Art, Los Angeles; Los Angeles County Museum of Art; Hessel Museum of Art at Bard College, New York; Norton Museum of Art, West Palm Beach; Centre Pompidou, Paris; and Fundación Proa, Buenos Aires.

The FOCUS series is organized by the Modern Art Museum of Fort Worth and features three solo exhibitions each year. Started in 2005, this series is committed to introducing visitors to new and emerging artists that are gaining worldwide acclaim as well as exhibiting esteemed mid-career artists who have previously been under-recognized in the region. The exhibitions are fresh and dynamic, as the artists are intimately involved in the planning and often create new work for these presentations. The artists also engage in dialogue with Museum visitors and donors in small group conversations and in lectures for the public. The FOCUS series is international in scope and features work across all media. Throughout the program’s history, many FOCUS exhibitions have marked the artist’s first solo museum show.

The FOCUS series is organized by Associate Curator Alison Hearst. FOCUS exhibitions are open to the public and are included in general Museum admission.

Support for the 2018–2019 FOCUS exhibition series is generously provided by Frost Bank.