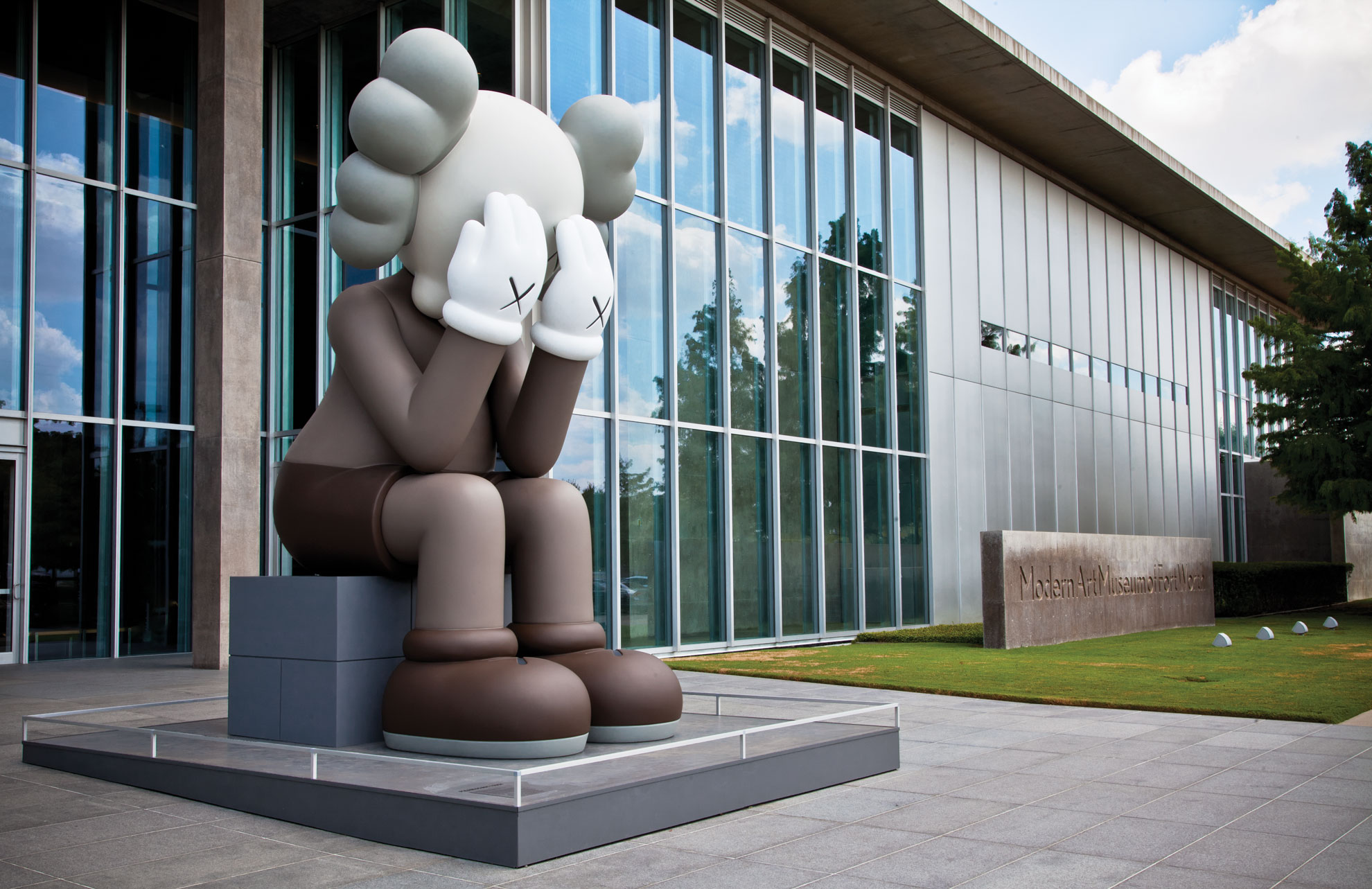 KAWS often explores Pop-culture imagery in his work, borrowing from existing cartoon figures, advertisements, posters, television, and film. Tweaking and manipulating these universally identifiable images, KAWS morphs the familiar into something new. COMPANION (PASSING THROUGH) exemplifies this, and represents one of the artist’s most iconographic recurring characters. The sixteen-foot-tall sculpture, a human/animal/cartoon hybrid, is seen seated, head in hands. COMPANION has a Mickey Mouse body, complete with gloves, shorts, and cartoon-shaped shoes, like the original character. To this borrowed, well-known image, KAWS adds his own now unmistakable imprints—an inflated skull and Xs, for example. Like Auguste Rodin’s The Thinker, 1903, COMPANION (PASSING THROUGH) reflects a modern-day human condition. Although we may initially feel connected to it through its familiarity, we also sympathize with what it models to us: its posture and pose suggest sadness, fatigue, and the feeling of being overwhelmed.

Born Brian Donnelly in 1974, KAWS grew up in Jersey City, New Jersey, where he emerged as a graffiti artist in the early 1990s. He later studied at the School of Visual Arts, New York City, (1993-1996), shifting his focus to creating public “interventions” by subverting imagery on billboards and advertisements in bus shelters and phone booths. This led to collaborations with commercial photographers and designers, and to his evolution of making original artworks. Today KAWS comfortably straddles the commercial and fine art worlds. He is well-known for his pop-oriented paintings, drawings, and sculptures that have been widely exhibited across the globe; and he is acclaimed as a graphic artist, and a creator of highly sought-after editioned toys, apparel, and other products.

A 40-foot long balloon of KAWS’s character COMPANION was recently featured in the 2012 Macy’s Thanksgiving Day Parade. Upcoming projects include “Sculpture Plinth Exhibition Program” at the Pennsylvania Academy of Fine Arts Museum (2013); and a solo exhibition at CAC Malaga, Spain (2014).