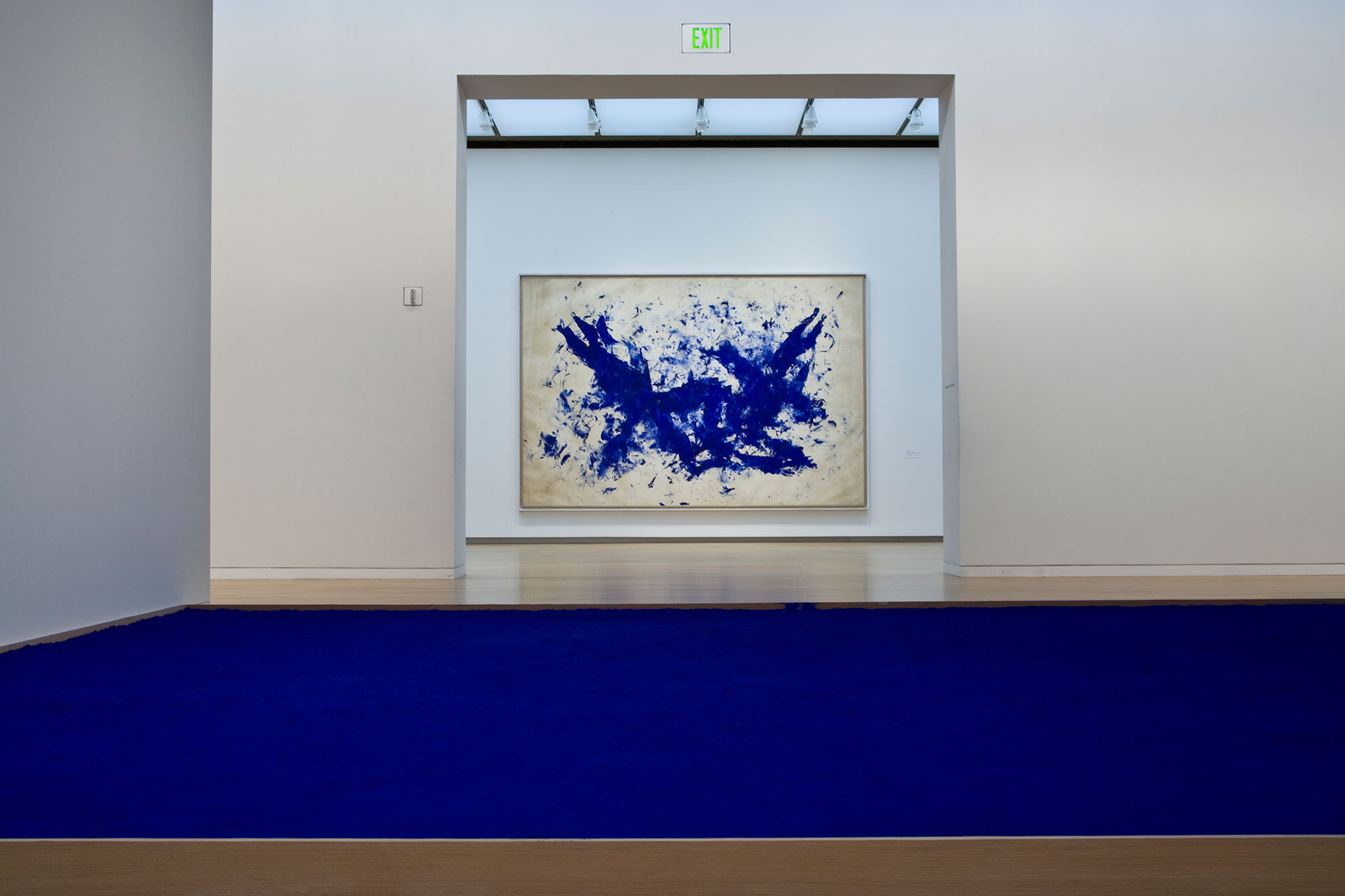 Declaring Space includes works by four artists whose images had a dramatic effect on the complex development of space and color in abstract painting as it evolved in the years following World War II. The works of these artists do not represent a movement as much as a dramatic evolution of what has come to be thought of as "the field," an often misunderstood term in the vocabulary of postwar abstract art. While this term is often associated with American painting, specifically Abstract Expressionism and Color Field painting, Declaring Space addresses this concept from an international viewpoint, blurring national labels for a set of spatial themes that were evoked in abstract art in the latter half of the twentieth century, where the boundaries of traditional pictorial space were crossed and a new realm of abstract theater was engaged.

Mark Rothko's paintings of the 1940s and 1950s set the stage for this spatial theater. "I think of my pictures as dramas," Rothko wrote in 1947. "The shapes in the pictures are the performers. They have been created from the need for a group of actors who are able to move dramatically without embarrassment and execute gestures without shame. Neither the action nor the actors can be anticipated, or described in advance. They begin as an unknown adventure in an unknown space. It is at the moment of completion that in a flash of recognition, they are seen to have the quantity and function which was intended. Ideas and plans that existed in the mind at the start were simply the doorway through which one left the world in which they occur."

Rothko will be represented by six major canvases, presented in an environmental ensemble that approaches the ambient effect he often sought in his studio and public exhibitions. Among the paintings included will be such masterworks as White Band No. 27, 1954, and Red Over Dark Blue on Dark Gray, 1961.

Lucio Fontana, whose career spanned the late 1920s to the 1960s, declared space as the ultimate subject of abstraction. "As a painter working on one of my prepared canvases," Fontana wrote, "I don't want to make a picture. I want to open up space, to create a new dimension for art, to connect it up with the cosmos as it lies infinitely outstretched, beyond the flat surface or the image. By inventing the hole through the canvas, by its repeated use, I did not want to 'decorate' a surface—on the contrary, I tried to smash the dimensions which limit it. A long way beyond the slashed canvas, a newly won freedom awaits us: but, just as obviously, the end of art awaits us too."

Fontana will be represented by a focused survey of his nearly five-decade career, spanning his earliest Spatial Concepts, in which small canvases evoke immense galaxies through swirling fields of paint subtly embedded with small stones and broken glass, to his famous Attessi, or cuts, in which the artist has used a sharp knife to literally slice through the canvas surface into another space. Throughout his career, Fontana was also a pioneer in creating room-sized environments that expressed his obsession with the mysteries of a pure space beyond the confines of the canvas. A centerpiece of the Fontana section will be a rare installation created by the artist in Germany in 1968. The installation, which was originally created for Documenta IV in Kassel, Germany, in 1968, consists of an entirely white labyrinth, including ceiling and floor, which surrounds a large plaster cut. This rare loan has been provided by The Fontana Foundation in Milan, Italy, and the Museo de Arte Contemporáneo, Caracas.

Barnett Newman believed that art must be abstract because it is about "pure" ideas and powerful metaphysical concerns, not about the world of physical appearances. Newman's imagery is founded on the assumption of an all-consuming field in which man is ultimately connected to a universal space far beyond the limits of pictorial illusion. "I don't manipulate space," Newman wrote in 1948. "I declare it. It is by my declaration that my paintings become full...Since childhood I have always been aware of space as a space-dome. I remember years ago shocking my friends by saying I would prefer going to Churchill, Canada, to walk the tundra than go to Paris. For me, space is where I can feel all four horizons, not just the horizon in front of me and in back of me because then the experience of space exists only as volume."

Newman's contribution will be a suite of some of his most iconic canvases, including the dark and brooding Abraham from the collection of the Museum of Modern Art, New York; The Name II, 1950, and Achilles, 1952, from the National Gallery of Art, Washington, DC; and Ulysses, 1952, from the Menil Collection, Houston. Also included will be one of Newman's most rigorous sculptures, Here III, 1965–66, from the Nasher Sculpture Center, Dallas.

Yves Klein Yves Klein, the youngest and most conceptually radical of this group, took abstraction to an ultimate threshold, dramatically challenging his audiences to "Come with me into the void." Creating primarily monochrome paintings in a variety of formats, Klein employed color and space as metaphors for the life of the spirit. As he declared, "[Monochrome is] the only physical way of painting which permits access to the spiritual absolute...My monochrome paintings are landscapes of freedom."

Klein will be represented by key monochrome "Propositions" dating between the early 1950s and the 1960s, including a large-scale floor piece made of pure pigment. Along with key monochromes, a number of special projects celebrating the artist's invention of International Klein Blue will be presented. The glass containers that cap the three gallery pavilions of the Museum's building will be filled with blue light. Concert, 1959, which consists of a chorus of thirty instrumentalists and thirty vocalists, performing fifteen minutes of sound and fifteen minutes of silence, will also be presented during the exhibition.

These four artists opened up the spatial and metaphysical possibilities of abstract painting in gradual but equally unprecedented ways. As the curator of the exhibition, Michael Auping, describes it, "Rothko sets the stage, draws back the curtains, if you will, on the opening up of this space. Newman emphatically declares what might be called a totemic space, while Fontana literally slices through the picture's plane with a razor, and Klein, as he pronounced it, leaps into the void."