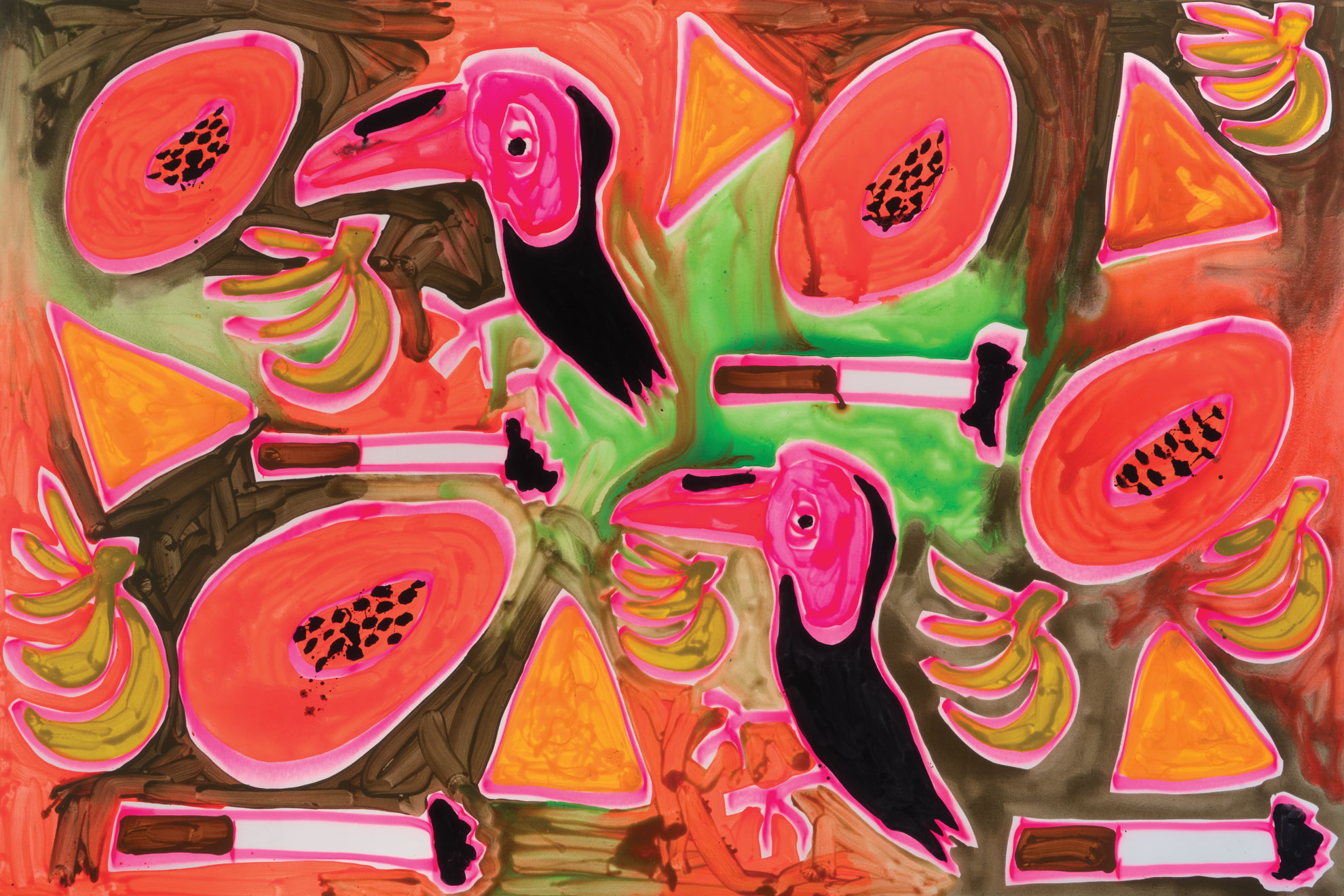 Katherine Bernhardt’s vibrant and youthful paintings hover between abstraction and figuration. Recently, she has been working on paintings in which she juxtaposes everyday objects, such as those in Windex cigarettes basketball, 2016, that float flatly atop lushly painted, solid grounds of color. Her subjects abound in popular and consumer culture and are depicted in a simplified, flat, gestural style that approaches a cartoonish quality.

These works are often referred to as “pattern” paintings, as the motifs she illustrates are repeated within a single work. She is influenced by quotidian items, places, and African, Moroccan, and Caribbean textiles, which are highly evident in her subjects, forms, and colors. Bernhardt has stated, “My interest is in Dutch wax printing on African fabrics, so that’s what I’ve been really influenced by. They have all these funny combinations of things that wouldn’t necessarily go together—sunglasses and birds, or whatever it might be.” Bernhardt’s materials include thinned, fluid pools of acrylic and assured, drippy marks of spray paint, connecting the works to both color field painting and graffiti. Mixing traditional painting styles with kitsch, Bernhardt’s works are lush, humorous, youthful, and relatable.

Katherine Bernhardt was born in Saint Louis and currently lives in New York. She received her MFA from the School of Visual Arts in New York and her BFA from the School of the Art Institute of Chicago. She has exhibited widely across the globe, including recent solo exhibitions at Carl Freedman Gallery, London; Venus over Manhattan, New York; CANADA, New York; Roberto Paradise, San Juan, Puerto Rico; and Gallery Loyal, Stockholm, Sweden. Her first solo museum exhibition will be at the Contemporary Art Museum St. Louis in January 2017. She has participated in many group shows at such venues as the Atlanta Contemporary; Kunstforeningen GL Strand, Copenhagen; Saatchi Gallery, London; Foundation Salomon, Annecy, France; Macro Future, Rome; and the Extra City Kunsthal, Antwerp.