Katie Paterson is known for her multidisciplinary and conceptually driven work, with an emphasis on nature, ecology, geology, and cosmology. Many of her installations have been the result of intensive research and collaboration with specialists as diverse as astronomers, nanotechnologists, and firework manufacturers. Recent works in this exhibition include: All the Dead Stars (2009), a large map documenting the locations of 27,000 dead stars known to humanity; and Light bulb to Simulate Moonlight (2009), an incandescent bulb designed to transmit wavelength properties identical to those of moonlight. Paterson received her BA in 2004 from Edinburgh College of Art in Scotland and her MFA in 2007 from the Slade School of Fine Art in London. She has since participated in exhibitions at Modern Art Oxford, England; the Power Plant, Toronto, Canada; and Haunch of Venison, London, England. Her work has also been featured in the Whitstable Biennial 2010, Whitstable, England; PERFORMA 09, New York, New York; and Altermodern: Tate Triennial 2009, Tate Britain, London, England. She currently holds a John Florent Stone fellowship at Edinburgh College of Art, and is the Leverhulme Artist-in-Residence in the Astrophysics Group at the University College London for the 2010–2011 academic year. The artist lives and works in Berlin, Germany. 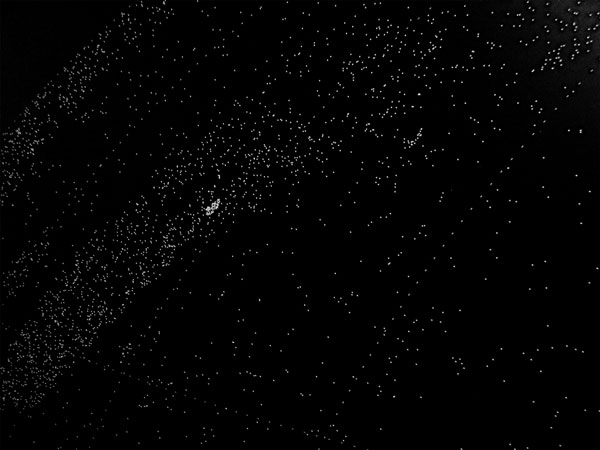