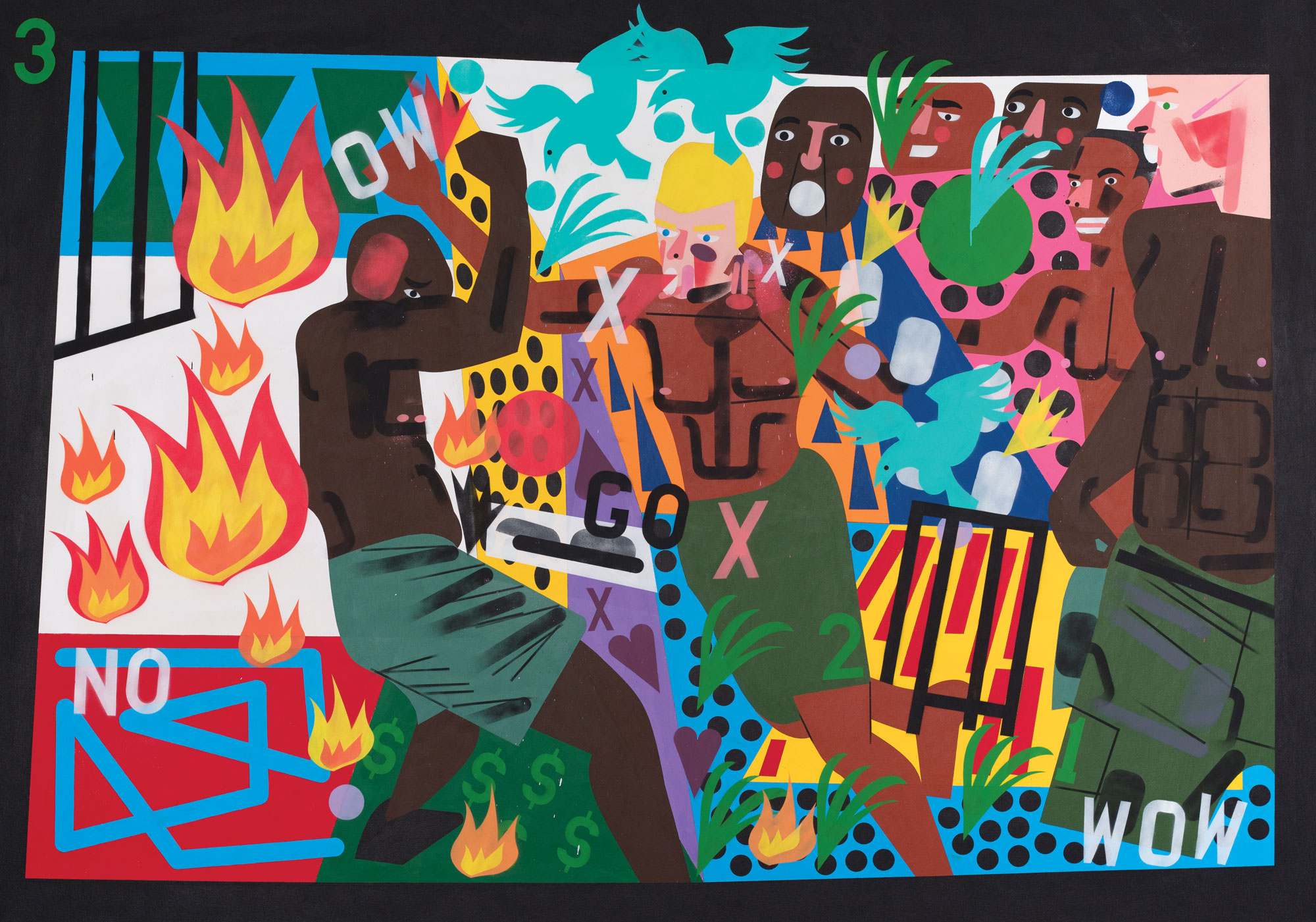 Nina Chanel Abney's paintings are visually frenetic, reflecting the fast-paced energy of life today. Her imagery refers to such diverse subjects as pop culture, world events, and art history in compositions with flattened, simplified forms. Abney's works commonly incorporate snippets of text, disembodied figures and silhouettes, and geometric abstract shapes. Themes that relate to American society, including celebrity culture, race, sexuality, and police brutality, are broached in her paintings. By touching on serious subjects in a colorful palette and graphic style, Abney's work is, as the artist states, "easy to swallow, hard to digest."

In the painting Hothouse, 2016, eight nude female figures span the length of the canvas in provocative poses; some look down and away, while others gaze directly at the viewer. These stylized figures oscillate between appearing fearful or reluctant and uninhibited, something that is further demonstrated with alternating text such as "no," "yes," and "XXX" on the canvas. Through these contradictions, Hothouse captures both the narcissistic aspect of social media and selfie culture as well as the continued objectification of women in our society and mass media. Drawing upon art history, the composition of Hothouse cites Pablo Picasso's painting Les Demoiselles d'Avignon, 1907, which is notable in part for bucking against idealized representations of female beauty. Further alluding to art history, the colorful background and abstract forms in Hothouse, as in many of Abney's works, recalls the pop-cubist style of the American modernist painter Stuart Davis.

Although suggestive, Abney's paintings are open-ended, consisting of fragmented vignettes and narratives. This mirrors the way we consume data today—in incomplete, unrelated excerpts, through scrolling the Internet or flipping through the channels. By depicting aspects of American culture in a manner akin to how we now gather information, Abney's works are contemporary genre scenes in both style and subject.

Nina Chanel Abney was born in Chicago and currently lives in New York. She holds an MFA from Parsons School of Design in New York and a BFA from Augustana College in Rock Island, Illinois. Her first museum exhibition, Nina Chanel Abney: Royal Flush, opened at the Nasher Museum of Art at Duke University, Durham, North Carolina, in 2017 (traveling to the Chicago Cultural Center, February 10-May 6, 2018; Institute of Contemporary Art, Los Angeles, and California African American Museum, Los Angeles, September 23, 2018-January 20, 2019; and Neuberger Museum of Art, Purchase College, State University of New York, April 7-August 4, 2019.) Abney has been included in group exhibitions at such venues as the Brant Foundation Art Study Center, Greenwich, Connecticut; Whitney Museum of American Art, New York; and the Contemporary Arts Center, New Orleans, among many others. Her work is included in public collections such as the Brooklyn Museum, New York; The Rubell Family Collection, Miami; Bronx Museum, New York; and Burger Collection, Hong Kong. This is Abney's first solo exhibition in Texas and will feature recent works.