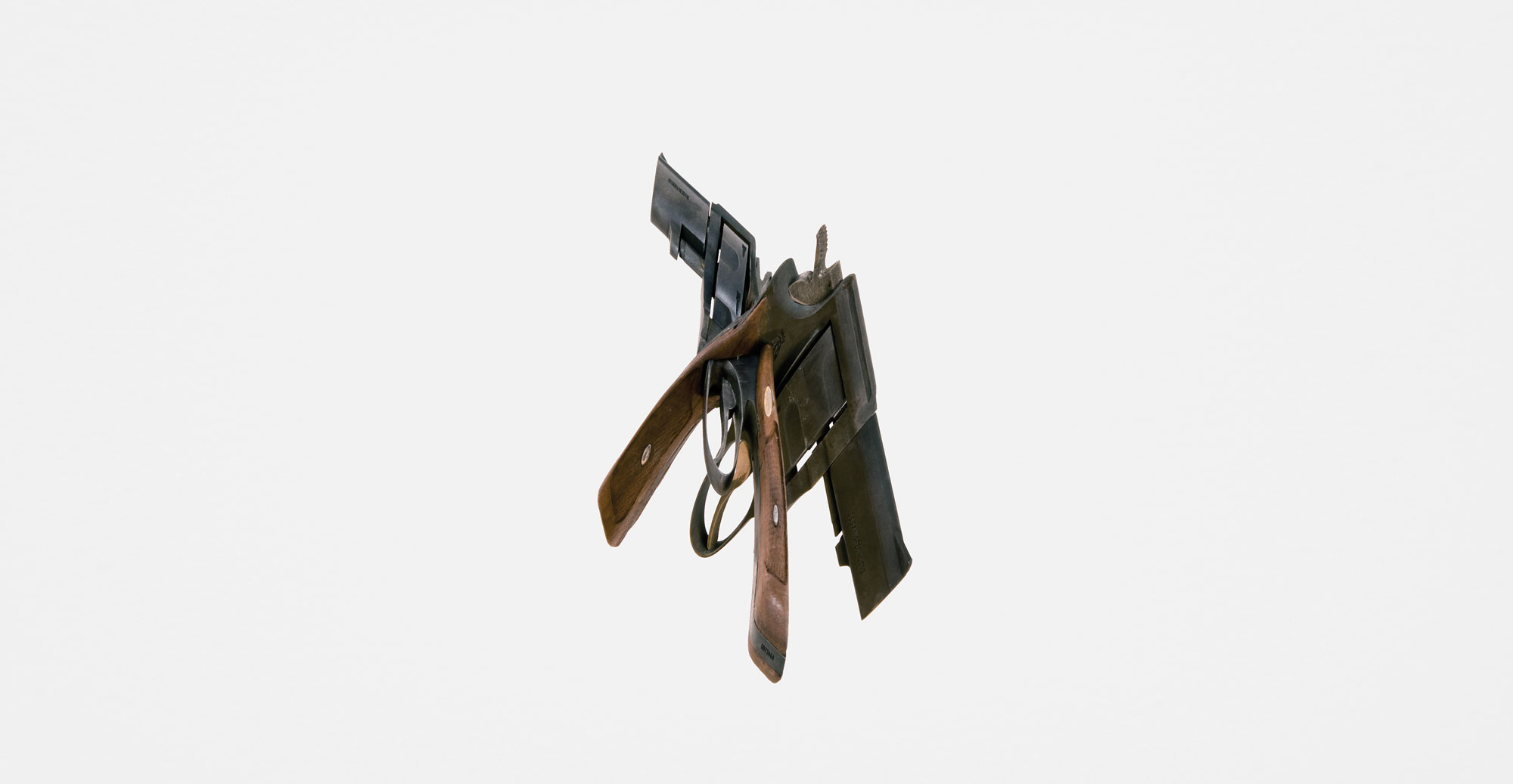 Robert Lazzarini is best known for his sculptures of common objects in which detailed craftsmanship is combined with precise illusionistic distortion. Scaled to the size of the original object and using the same materials, Lazzarini creates versions of guns, knives, brass knuckles, chairs, telephones, telephone booths, and skulls, among other things. Factuality is a theme that runs throughout his imagery, as is visual perception and how that perception is constructed in both the mind of the viewer and in the physical world. “I am concerned with the direct relationship between the viewer, the original object (the role of memory), and the sculpture (the object reconfigured),” Lazzarini explains.

In some cases the artist’s choice of subject has psychological implications. The viewer who moves in for a better look at gun iv, 2009, made of steel and walnut, for example, can suddenly be staring down the barrel of a gun. Here, Lazzarini’s deadpan yet skewed imagery disrupts any possibility of what one might consider normal viewing and coaxes the viewer into the prospect of something dangerous. The objects in this work initially appear to be a mirror image of a single .38-caliber Smith & Wesson. Closer examination, however, reveals that these are two distinct, conjoined objects and that the barrel of one gun pierces through the grip of the other. The artist’s use of even, soft lighting and his subtle distortion of the gallery walls add to the optical illusion and to the viewer’s disorientation. Encountering a work like gun iv raises such basic questions as, Do I know what I think I know? Do I see what I think I see? The title, the simple lower case gun with the iv to mark its number in the series, reinforces the idea that the work is the actual object while vision and memory suggest that these are not guns we have ever seen before.

There is a rich art historical lineage for Lazzarini’s work. His repetition of objects and the types of (often dark) pop culture subjects he depicts recall artists such as Andy Warhol, who created his own series of guns in the early 1980s. Lazzarini has also been compared to artists who employed visual tricks in their work—the nineteenth century trompe l’oeil painter William Harnett, for example. But it is the Surrealist René Magritte whose study of recognizable objects most relates to Lazzarini’s work. When Magritte created his famous painting The Treachery of Images in 1929, which depicts a pipe and the declaration, “Ceci n’est pas une pipe” (This is not a pipe), he was calling into question the notion of representing a three-dimensional object on a flat, two-dimensional surface and its relationship to the original. Like Magritte and others before him, Lazzarini pushes the boundaries of how the realm of the visual plays into our understanding of the world. His modern-day explorations are specific to true form and materiality, while at the same time they address the notion of dislocation and the infinite possibilities of re-presentation.

Robert Lazzarini was born in New Jersey in 1965 and currently lives in New York City. He received his BFA at the School of Visual Arts in New York in 1990. His work has been the subject of numerous solo and group exhibitions.