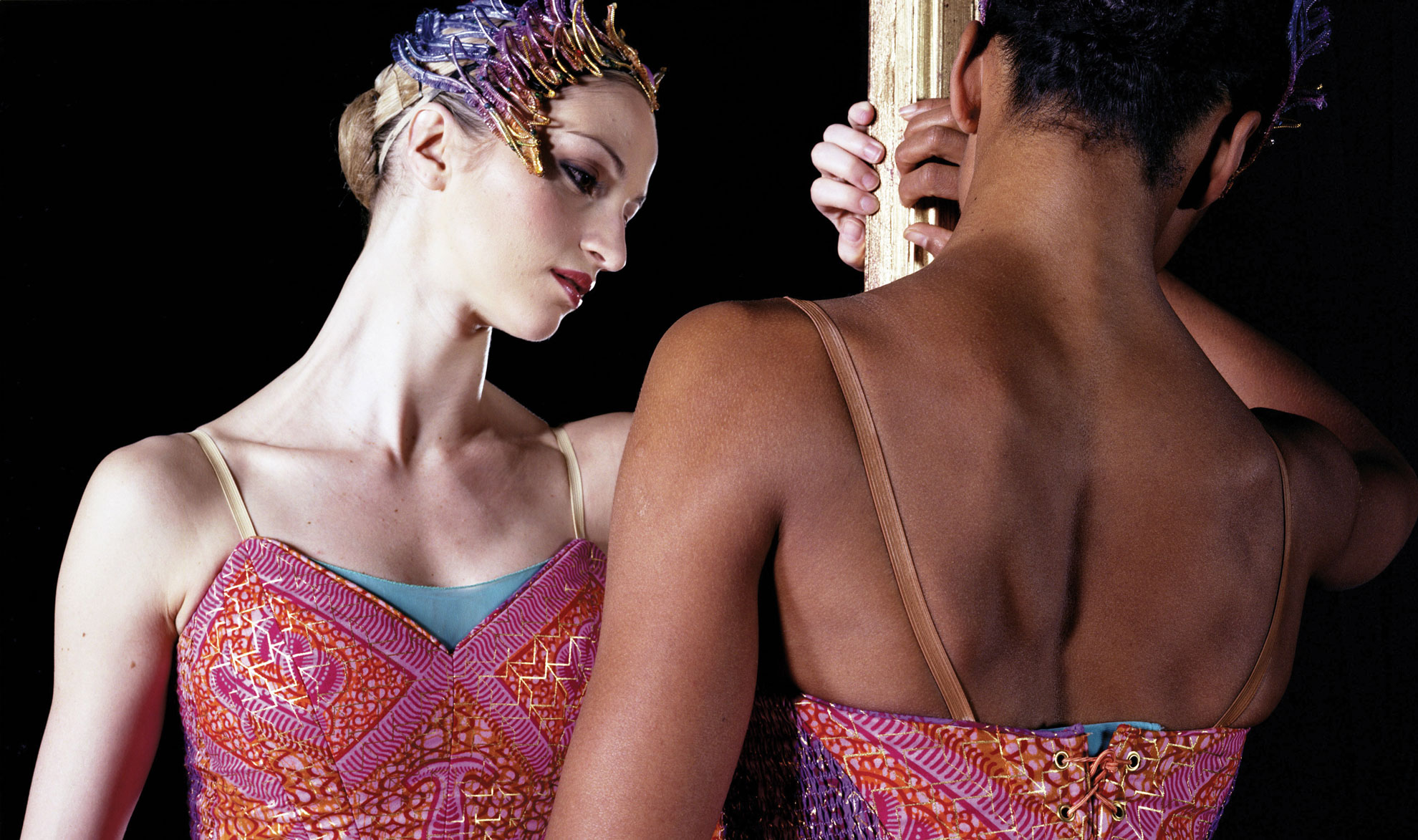 British/Nigerian artist Yinka Shonibare MBE explores colonialism and the intricate ways in which it has shaped, and continues to shape, cultural identities. He is well known for his life-size sculptural tableaux featuring staged, headless mannequins dressed in elaborate period garments. In these works, the materials and designs of the original clothing are replaced with batik, a colorful and ornately patterned fabric. The story of batik itself speaks to the notion of colonization and its effects: it originated in Indonesia; then, by way of imperial explorers, it was introduced to West Africa, where it was appropriated and now has its strongest associations; and indeed its greatest exporters are not in Africa at all, but are Dutch and British. By presenting his version of historical (often white, European) figures dressed in batik, Shonibare “Africanizes” the subjects, subversively pointing out a multitude of deep-rooted mythologies, falsehoods, and prejudices that complicate the dominant narrative of history and identity.

In Scramble for Africa, 2003, fourteen headless, mixed-race mannequins are seated at a sixteen-foot-long table. They symbolize the European figureheads who came together at the Berlin Conference, 1884–1885, to annex territories of trade in Africa for each of their countries. With regard to colonialism, the absence of heads implies loss of identity and, moreover, loss of humanity. Of this work, Shonibare explains, “I wanted to represent these European leaders as mindless in their hunger for what the Belgian King Leopold II called ‘a slice of this magnificent African cake.’”

In Shonibare’s video Odile and Odette from 2005, he portrays an account of Pyotr Ilyich Tchaikovsky’s famous ballet Swan Lake. The ballet, which debuted in 1877 in Moscow, is the story of a prince who wants to get married and must choose between the good swan, Odette, and the bad swan, Odile. Traditionally, the two roles are danced by the same ballerina, with Odile in black clothes and Odette in feminine, finer garments. In Shonibare’s Odile and Odette, one black and one white ballerina dance the parts, and both have batik tutus and pointe shoes. “The roles—one as the ego and one as alter—in my version are more ambiguous: you would not necessarily be able to tell who is the bad swan and who is the good one,” says Shonibare.

In 2005, Shonibare was bestowed the title Member of the Order of the British Empire (MBE), an award of merit (in his case for service to the arts), and now uses the title professionally as part of his artistic identity. Like the conceptual threads found within his work, the MBE is another aspect of his acknowledgment and parody of our postcolonial world and its contradictions. Shonibare often highlights just such dualities and hybridities in his work, and much of it has a personal meaning for him: he is an African man who grew up in England; he speaks English and Yoruba; his father was a lawyer, his great-great grandfather, an African chief. Further, in his late teens, he contracted a spinal virus that paralyzed one side of his body. He has since been in a long period of gradual recovery and is currently half able-bodied, half physically challenged. Yet another aspect of duality explored by Shonibare is the incorporation of beauty (in his imagery) and ugliness (in the stories of dominant power structures) within one image. With this dynamic, the initial seduction of his work is disrupted by the artist’s suggestion of a darker cultural and historical underbelly in which politics of identity are exposed and examined.