Modern Masters: A Tribute to Anne Windfohr Marion highlights the contributions of one of the Modern Art Museum of Fort Worth’s greatest patrons, tracing her support over nearly a half century. The exhibition of 80 works by 47 artists includes five renowned works from her collection, given to the Modern on her recent passing: Arshile Gorky’s The Plow and the Song, 1947; Willem de Kooning’s Two Women, 1954–55;  Mark Rothko’s White Band No. 27, 1954; David Smith’s Dida Becca Merry X, 1964; and Ellsworth Kelly’s Spectrum III, 1967.

In addition to the recent gifts, this tribute features work from post–World War II art movements, including a major group of works by the Abstract Expressionist artist Jackson Pollock; iconic minimalist works by Carl Andre, Agnes Martin, and Richard Serra; and post-1970 photography by an international field of artists such as Bernd and Hilla Becher, Yasumasa Morimura, Thomas Ruff, Cindy Sherman, and Carrie Mae Weems, as well as works by other key artists such as Francis Bacon, Howard Hodgkin, Anselm Kiefer, Gerhard Richter, Sean Scully, and Richard Serra, among many others.

Each of the works presented in this exhibition was made possible by Anne Marion, Anne and John Marion, or The Burnett Foundation, in addition to gifts donated anonymously or in partnership with the Sid W. Richardson Foundation.

This exhibition is made possible with the support of Vantage Bank. 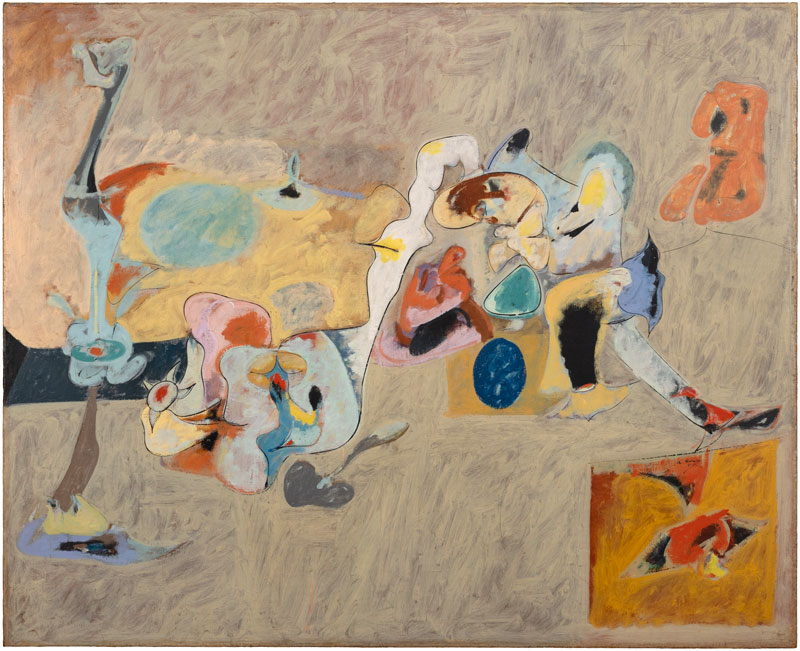 Arshile Gorky
The Plow and the Song, 1947
Oil on burlap
52 1/8 × 64 1/4 inches
Collection of the Modern Art Museum of Fort Worth, Gift of Anne Windfohr Marion