The Paintings of Joan Mitchell 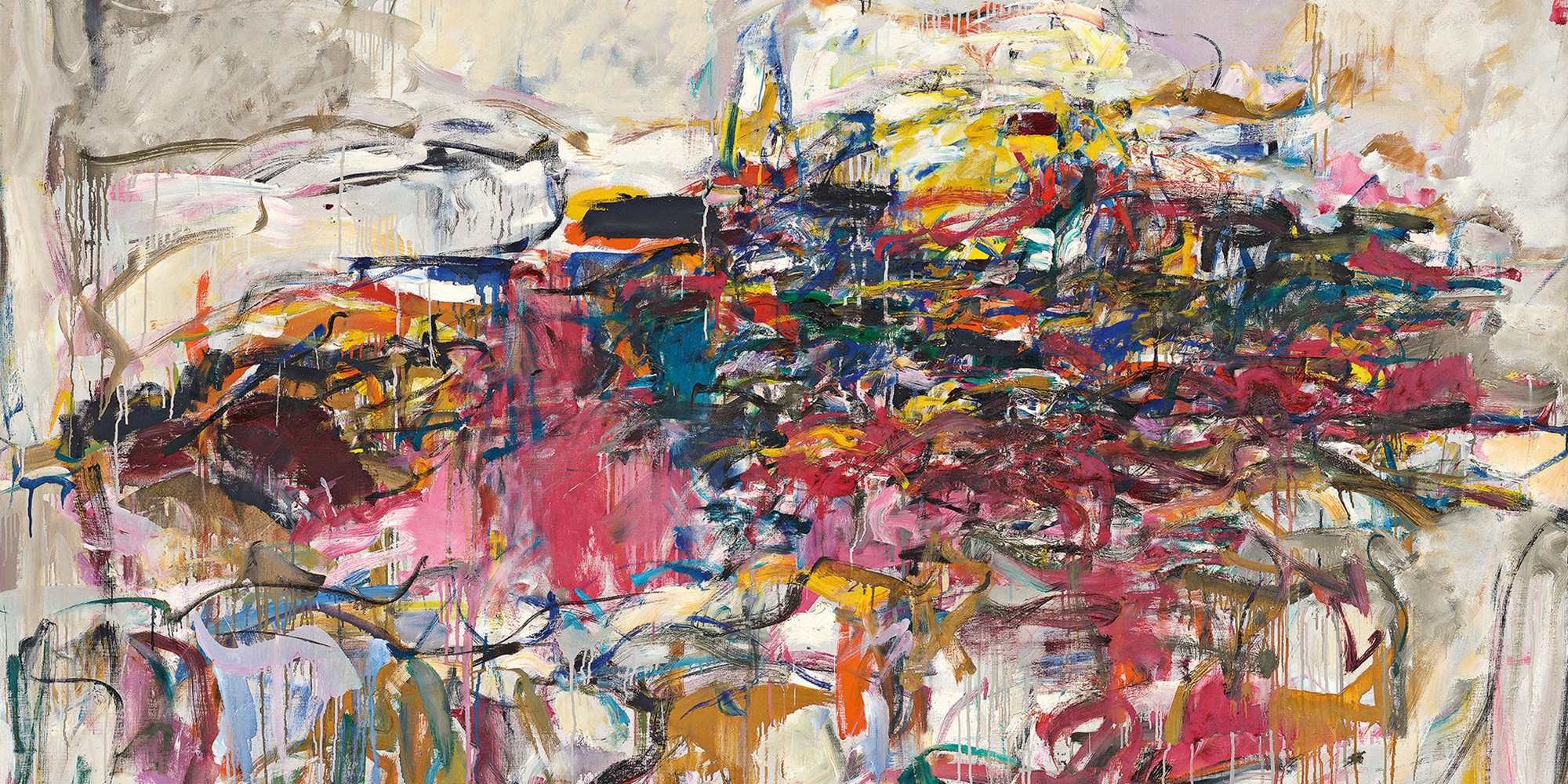 Joan Mitchell was a central figure of the second generation Abstract Expressionists. Although highly regarded by critics and fellow artists, Mitchell's achievement has never received full public recognition. The Paintings of Joan Mitchell, organized by the Whitney Museum of American Art in New York, covers the artist's entire career, from 1951 until her death, featuring nearly 50 works both intimate and grand in scale.

In preparing the exhibition and its accompanying catalogue, guest curator Jane Livingston drew upon the artist's personal papers—material that the Estate of Joan Mitchell has never before made available to scholars. Ms. Livingston had access to Mitchell's notes, letters, and other documents revealing her connection to the New York art and poetry worlds. Mitchell was friendly with many artists and writers, including Sam Francis, Norman Bluhm, Frank O’Hara, and John Ashbery. The publisher Barney Rosset, Mitchell's husband of several years and her lifelong friend, has cooperated extensively with this project.

"Joan Mitchell's paintings reflect a fierce commitment to her work and her distinctive vision of Abstract Expressionism in an era when men dominated American vanguard art," said Maxwell L. Anderson, Alice Pratt Brown Director of the Whitney. "This show will be the opportunity of a lifetime to see a carefully balanced overview of Mitchell's achievement. Our aim is to further both the critical and popular reputation of this great American painter."

"Joan Mitchell produced some of the most breathtaking paintings of her time," said Jane Livingston, guest curator of the exhibition. "She outpaced all but a handful of her male mentors and counterparts, while only Lee Krasner stands as a possible rival among her female counterparts. Mitchell's commitment to an explosive yet delicate, sometimes lyrically beautiful and sometimes aggressively stormy vocabulary of form, line, and color evolved over the decades, but she remained devoutly abstract. Her work resonates with a passion for color, light, and landscape."

The Modern's chief curator, Michael Auping, an expert on Abstract Expressionism, worked with Mitchell prior to her death in 1992. He comments, "Joan Mitchell had an extraordinarily powerful presence because she encompassed so many dualities. She could be powerfully combative or touchingly gentle, one minute engaging in rough street talk and five minutes later exposing a remarkably erudite persona through her knowledge of art history and literature, particularly poetry. Her paintings reflect all of these dualities."

About the Exhibition
The exhibition initially focuses on paintings from the early 1950s, the artist's first mature period, when she announced the quasi-landscape motif that she would later develop in a number of directions. A major work from this period is Rose Cottage (1953). The early works prepare the way for such important paintings as Hemlock (1956), Ladybug (1957), and George Went Swimming at Barnes Hole, But It Got Too Cold (1957), large-scale works that signal Mitchell’s energetic yet controlled mastery of oil paint on canvas.

One of the most underappreciated periods in Mitchell's oeuvre, the early to mid-1960s, will be well represented with such works as Grandes Carrières (1961–62) and My Landscape II (1967). From the entirely gestural, slashing brushwork of the 1950s, Mitchell in these works introduced a more finely wrought formal manner, creating self-contained, vortex-like shapes centered away from the canvases’ edges and working in more complex color schemes than ever before.

A decisive shift occurred in Mitchell's work when she moved in 1968 from Paris to Vétheuil, on the grounds where Claude Monet's first great garden was established. It was here that she lived out the rest of her life. This environment fostered perhaps the artist's most lyrical work, the Sunflower series and related paintings of the late 1960s and early 1970s, such as Sunflower III (1969). While these works reflect the atmosphere and palette of the gardens that surrounded her after she settled at Vétheuil, her painterly space clearly remains the space of Abstract Expressionism—often disjunctive, yet always primarily grounded in the physical nature of the canvas and the materials deployed on it. Increasingly in the 1970s, Mitchell shows her fundamental connection to the work of Willem de Kooning, while diverging more and more from its actual look.

"Joan was a great colorist, probably the best of her generation. Color comes out of her paintings like a waterfall. She always fought describing her paintings as landscapes. These are personal landscapes, not illustrations of landscapes. Yet they have all the dichotomies of beauty and violence that can be seen in nature," comments Auping.

The exhibition will include several of Mitchell's monumental diptychs, triptychs, and polyptychs. Mitchell began experimenting with separately stretched, adjoining panels, often in small scale, as early as the mid-1960s. She initially worked this way, apparently, in order to overcome the problem of her relatively small studio, which had even smaller doors. But eventually the polyptychs took on their own highly distinctive character, echoing and yet differentiating themselves sharply from the only other modern polyptych that seems comparable: Monet's Water Lilies. One of the centerpieces of the show will be the triptych Wet Orange (1971–72), a painting whose strident and yet somehow harmonious combination of tangerine, ochre, purple, and green make it a tour de force of color. Another painting, Salut Tom (1978), marks the end of the 1970s, a period when Mitchell was developing most of the themes that would carry her to the end of her career—ever larger scale, bolder references to objects such as trees and bodies of water, and above all an unleashing of sheer chromatic bravura.

Two works will be shown from the series La Grande Vallée (1983–84), a cycle characterized by a singular opulence of both brushwork and palette. Little known in the United States, these elegiac and heroic paintings, which may be seen as a culmination of Mitchell's large-scale lyric works, have been exhibited and collected primarily in France.

The exhibition will end with one of Mitchell's most compositionally daring, gesturally bold late paintings, the diptych Untitled (1992), which was completed just months before her death. This work is spare, the ground snowy white, with a pair of mostly yellow, echoing passages of almost frenzied brushwork inhabiting the centers of each panel, each emitting an emphatic down-thrusting trail of paint. 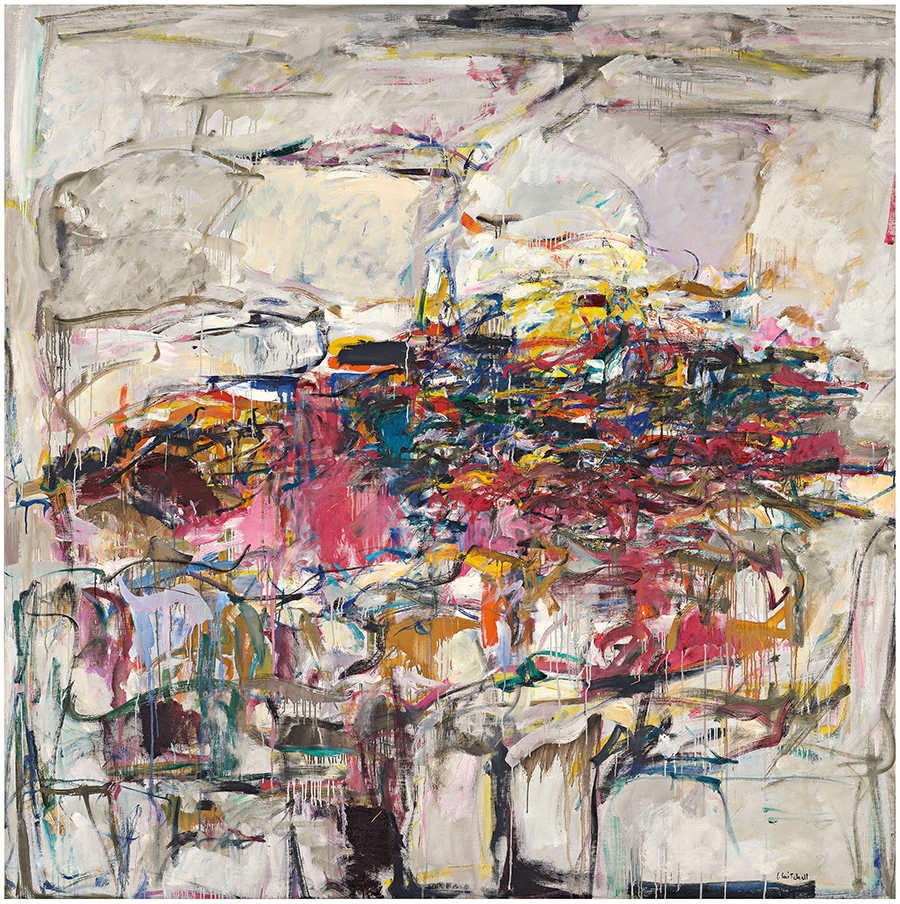