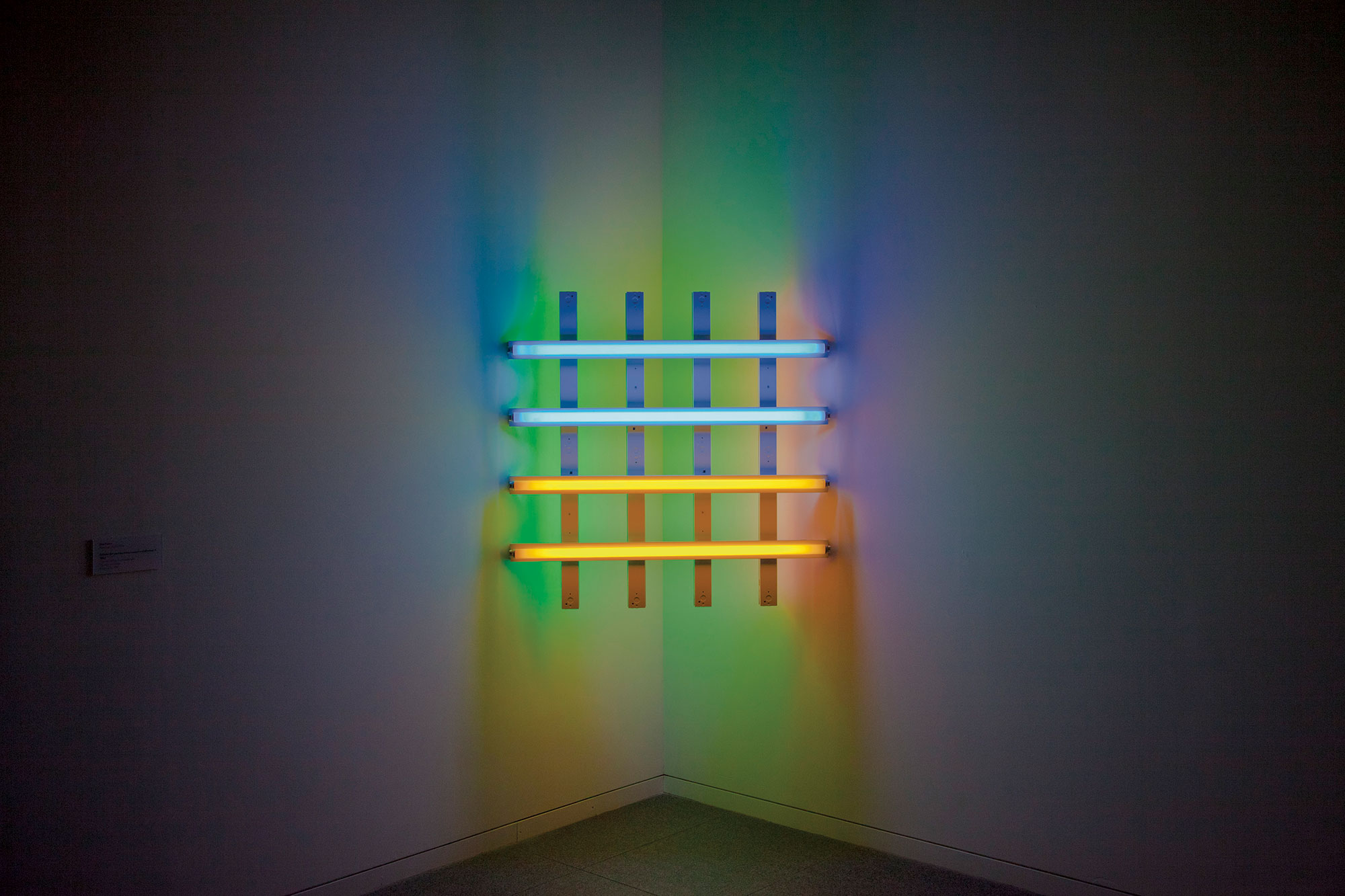 Among the acquisitions is a rare early wall drawing by Sol LeWitt (1928–2007), one of the pioneers of conceptual and minimal art. This is the third work by LeWitt to become part of the permanent collection. In the late 1960s and early 1970s, LeWitt began drawing lines directly on the walls of buildings, an action that radically transformed the role and definition of drawing in contemporary art. These drawings now exist as a set of signed instructions written by the artist, which are then executed by museum or gallery technicians. Wall Drawing #50A, 1970, consists of hundreds of hand-drawn lines in colored pencil (red, yellow, and blue) stretching across a large wall, overlapping each other, and measuring approximately 11-by-16 feet. From a distance the accumulation of these lines creates a large, foggy plane of color, but a closer look reveals a delicate web of intricately rendered lines.

Another important addition to the Museum’s significant holdings in minimal art is a Dan Flavin (1933–1996) light sculpture, Untitled (for you Leo, in long respect and affection) 4, 1978, recently purchased at auction from the late Los Angeles collector Max Palevsky (1924–2010). Made of yellow and blue fluorescent light fixtures, the work is installed across the corner of a wall. This work was dedicated by Flavin to Leo Castelli, the famous contemporary art dealer from New York. The work is a classic example of Flavin’s talent for blending different colored lights to create a continually active and vibrant space. The blue and yellow tubes of light create various shades of green that emanate from the corner of the room. The Museum’s permanent collection also includes Flavin’s Diagonal of May 25, 1963, a white fluorescent light acquired in 2002.

A monumental painting by artist Mark Bradford (b. 1961), Los Angeles, will also be unveiled as part of the celebration, the first in the Modern’s collection. Crafting semi-abstract paintings from fragments of the urban environment—billboard paper, posters, newsprint, and street debris—Bradford’s works are layered with multiple materials and meanings. An African American who grew up in south-central Los Angeles, the artist’s richly textured collages merge his fascination of the personal space of painting with the sprawling, continually changing street facades of the city and the particular political and racial tensions that still exist there.

The Modern’s newly acquired painting is titled Kingdom Day, 2010, and is one of Bradford’s most ambitious works to date, consisting of four 10-by-10-foot canvases. An homage to the Kingdom Day Parade in Los Angeles, which takes place every January on Martin Luther King Jr. Day, the work specifically refers to the 1992 parade, the same year four policemen were tried and acquitted for beating Rodney King, inciting riots throughout Los Angeles. The painting, which on first take appears almost abstract, presents an ambiguous and turbulent image. Various colored banners and words are obscured by a field of gestures that resemble sparks from an explosion. At the same time, the painting suggests a topographical read: a satellite view of the Southern California coast covered by violent atmospheric static.

Other new works to be debuted include a monumental charcoal drawing by artist Robyn O’Neil (b. 1977), Los Angeles, entitled These Final Hours Embrace At Last; This Is Our Ending, This Is Our Past, 2007 (not on view at this time). This nearly 14-foot-wide drawing depicts a vast ocean with a small figure that hangs over it by a thread. O’Neil’s spacious drawing will be contrasted with a small but potent recent painting entitled Ice, 2008–10, by Howard Hodgkin (b. 1932), which consists of an intensely blended bluish-white brushstroke advancing out of a reddish ground. O’Neil’s drawing is the first of her work to enter the permanent collection, and Hodgkin’s work is the third painting to be acquired for the Modern.

A new video and sound installation by Bruce Nauman (b. 1941) will also be unveiled during this anniversary celebration. The work, Studio Mix, 2010, is inspired by a set of finger exercises that the composer Béla Bartók wrote for children learning the piano. A video image of Nauman’s hands enacting the possible combinations of the four fingers and thumb is suspended in a dark gallery accompanied by three sound elements: Nauman’s voice calling out the instructions for the different finger and thumb combinations; a piano played by artist Terry Allen and recorded in response to Nauman’s instructions; and Nauman intermittently speaking the words “for children, for children.” The Museum’s permanent collection also includes, Nauman’s Setting a Good Corner (Allegory & Metaphor), 2000, acquired in 2001.

In December, the 10th anniversary month of the opening of the new building, the Museum will present a significant, new installation by Jenny Holzer (b. 1950), her first to be acquired by the Museum. This special commission will be unveiled at the gala on December 6. The artist’s signature, kinesthetic light-emitting diode (LED) signs, will deliver Holzer’s controversial texts in blue, including many of her famous truisms: MONEY CREATES TASTE; YOUR OLDEST FEARS ARE YOUR WORST ONES; SLIPPING INTO MADNESS IS GOOD FOR COMPARISON; MOTHERS SHOULDN’T MAKE TOO MANY SACRIFICES; LACK OF CHARISMA CAN BE FATAL.

Holzer’s glowing language will travel down long channels that extend from one end of a central, large clerestory gallery to a glass wall at the edge of the pond, creating rivers of text that give the illusion of penetrating the water. This major work, among other surprises, will give the collection a new look for the next decade. 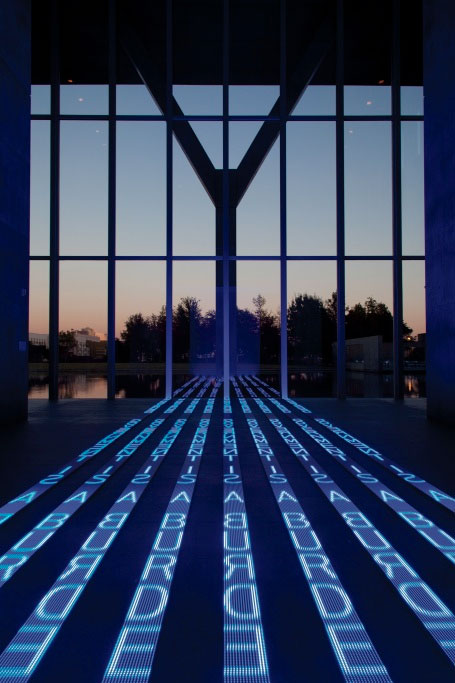