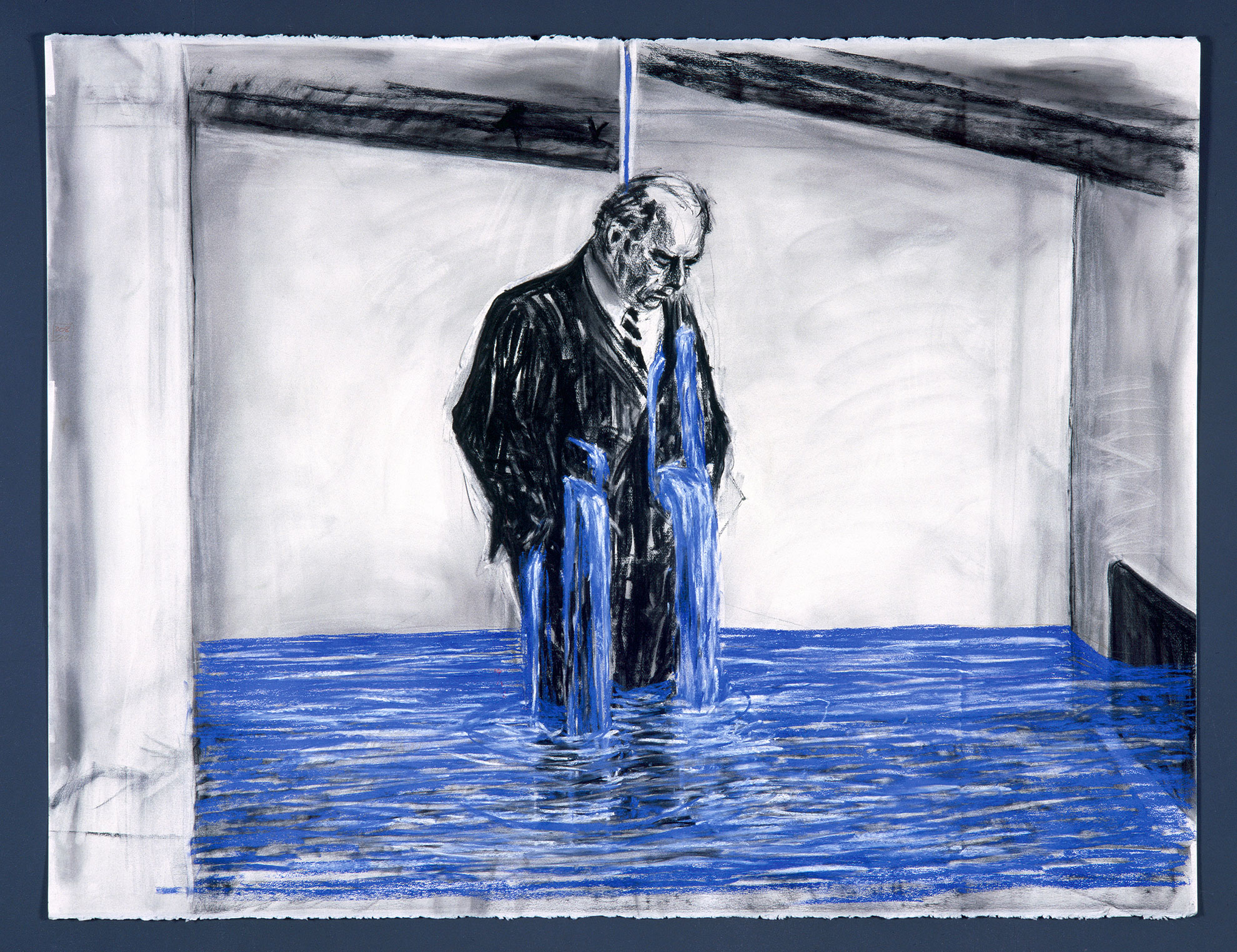 The exhibition explores five primary themes that have engaged Kentridge over the past three decades. Although the exhibition highlights projects completed since 2000 (many of which have not been seen in the United States), it also presents, for the first time, Kentridge's most recent work alongside his earlier projects from the 1980s and 1990s, revealing as never before the full arc of his distinguished career.

Michael Auping, Chief Curator at the Modern Art Museum of Fort Worth and contributor to the exhibition catalogue comments, "Kentridge is without a doubt one of the most interesting and inventive artists working today. A descendant of European immigrants to South Africa and the son of two distinguished anti-apartheid lawyers, his art takes the form of narratives that come out of his experience of growing up surrounded by the complex politics of that country. What makes Kentridge's art so poignant is that his stories encompass many viewpoints that stretch beyond the complex politics of South Africa. He is always finding new ways to look at historical or contemporary situations from a different angle. His process usually begins with charcoal drawings, which he painstakingly films to create dramatic and complex animations. These films, accompanied by musical scores, are then incorporated into more elaborate installations. This retrospective is a very special event encompassing all of the artist's major installations. It's like a five-stage, animated opera."

Born in 1955 in Johannesburg, where he continues to live and work, Kentridge has earned international acclaim for his interdisciplinary practice, which often fuses drawing, film, and theater. Known for engaging with the social landscape and political background of his native South Africa, he has produced a searing body of work that explores themes of colonial oppression and social conflict, loss and reconciliation, and the ephemeral nature of both personal and cultural memory.

Kentridge first gained recognition in 1997, when his work was included in Documenta X in Kassel, Germany, and in the Johannesburg and Havana Biennials, which were followed by prominent international solo exhibitions. His art was widely introduced to American audiences in 2001 through a traveling retrospective which primarily included works made before 2000. William Kentridge: Five Themes brings viewers up to date on the artist's work over the past decade, exploring how his subject matter has evolved from the specific context of South Africa to more universal stories. In recent years, Kentridge has dramatically expanded both the scope of his projects (such as recent full-scale opera productions) and their thematic concerns, which now include his own studio practice, colonialism in Namibia and Ethiopia, and the cultural history of postrevolutionary Russia. His newer work is based on an intensive exploration of themes connected to his own life experience, as well as the political and social issues that most concern him.

Although his hand-drawn animations are often described as films, Kentridge himself prefers to call them "drawings for projection." He makes them using a distinctive technique in which he painstakingly creates, erases, and reworks charcoal drawings that are photographed and projected as moving image. Movement is generated within the image by the artist's hand; the camera serves merely to record its progression. As such, the animations explore a tension between material object and time-based performance, uniquely capturing the artist's working process while telling poignant and politically urgent stories.

"Parcours d'Atelier: Artist in the Studio"
The first section of the exhibition examines a crucial turning point in Kentridge's work, one in which his own art practice became a subject. According to the artist, many of these projects are meant to reflect the "invisible work that must be done" before beginning a drawing, film, or sculpture. This theme is epitomized by the large-scale multiscreen projection 7 Fragments for Georges Méliès (2003), an homage to the early French film director, who, like Kentridge, often combined performance with drawing. The suite of seven films—each depicting Kentridge at work in his studio or interacting with his creations—has only been shown once before in the United States and will be accompanied by a rarely seen group of related drawings, forming an intimate portrayal of the artist's process.

"Thick Time: Soho and Felix"
A second section of the exhibition is dedicated to Kentridge's best-known fictional characters, Soho Eckstein, a domineering industrialist and real estate developer whose troubled conscience reflects certain miens of contemporary South Africa, and his sensitive alter ego, Felix Teitlebaum, who pines for Soho's wife and often functions as a surrogate for the artist himself. The centerpiece of this section, an ongoing work entitled 9 Drawings for Projection, comprises nine short animated films: Johannesburg, 2nd Greatest City after Paris (1989), Monument (1990), Sobriety, Obesity & Growing Old (1991), Mine (1991), Felix in Exile (1994), History of the Main Complaint (1996), WEIGHING . . . and WANTING (1998), Stereoscope (1999), and Tide Table (2003). These projections, along with a key selection of related drawings, follow the lives of Soho and Felix as they struggle to navigate the political and social climate of Johannesburg during the final decade of apartheid. According to Kentridge, the Soho and Felix films were made without a script or storyboards and are largely about his own process of discovery.

"Occasional and Residual Hope: Ubu and the Procession"
In 1975 Kentridge acted in Ubu Rex (an adaptation of Ubu Roi, Alfred Jarry's satire about a corrupt and cowardly despot), and he subsequently devoted a large body of work to the play. He began with a series of eight etchings, collectively entitled Ubu Tells the Truth (1996), and in 1997 made an animated film of the same name, as well as a number of related drawings. These works also deal with the South African experience, specifically addressing the Truth and Reconciliation Commission hearings set up by the nation's government in 1995 to investigate human rights abuses during apartheid. Other highlights in this grouping include the film Shadow Procession (1999), in which Kentridge first utilizes techniques of shadow theater and jointed-paper figures; the multipanel collage Portage (2000); a large charcoal-and-pastel-on-paper work entitled Arc Procession (Smoke, Ashes, Fable) (1990); and some of the artist's rough-hewn bronze sculptures.

"Sarastro and the Master's Voice: The Magic Flute"
A selection of Kentridge's drawings, films, and theater models inspired by his 2005 production of the Mozart opera The Magic Flute for La Monnaie, the leading opera house in Belgium, will be a highlight of the exhibition. The artist’s video projection Learning the Flute (2003), which started the Flute project, shifts between images of black charcoal drawings on white paper and white chalk drawings projected onto a blackboard, forming a meditation on darkness and light. Preparing the Flute (2005) was created as a large-scale maquette within which to test projections central to the production of the opera. Another theater model, Black Box/Chambre Noire (2006), which has never been seen in the United States, addresses the opera’s themes, specifically through an examination of the colonial war of 1904 in German South-West Africa, and of the genocide of the Herero people. What Will Come (has already come) (2007), a consideration of colonialism in Ethiopia, presents an anamorphic film installation in which intentionally distorted images projected onto a tabletop right themselves only when reflected in a cylindrical mirror.

"Learning from the Absurd: The Nose"
The fifth section comprises a multichannel projection made in preparation for Kentridge’s forthcoming staging of The Nose, a Metropolitan Opera production that will premiere in New York in March 2010. The Nose—a 1930 Dmitri Shostakovich opera based on Nikolai Gogol's absurdist short story of 1836—concerns a Russian official whose nose disappears from his face, only to turn up, in uniform, as a higher-ranking official moving in more respected circles. Kentridge's related work, I am not me, the horse is not mine (2008), is a room-size installation of projected films that use Gogol's story as the basis for examining Russian modernism and the suppression of the Russian avant-garde in the 1920s and 1930s.