Anime at the Modern 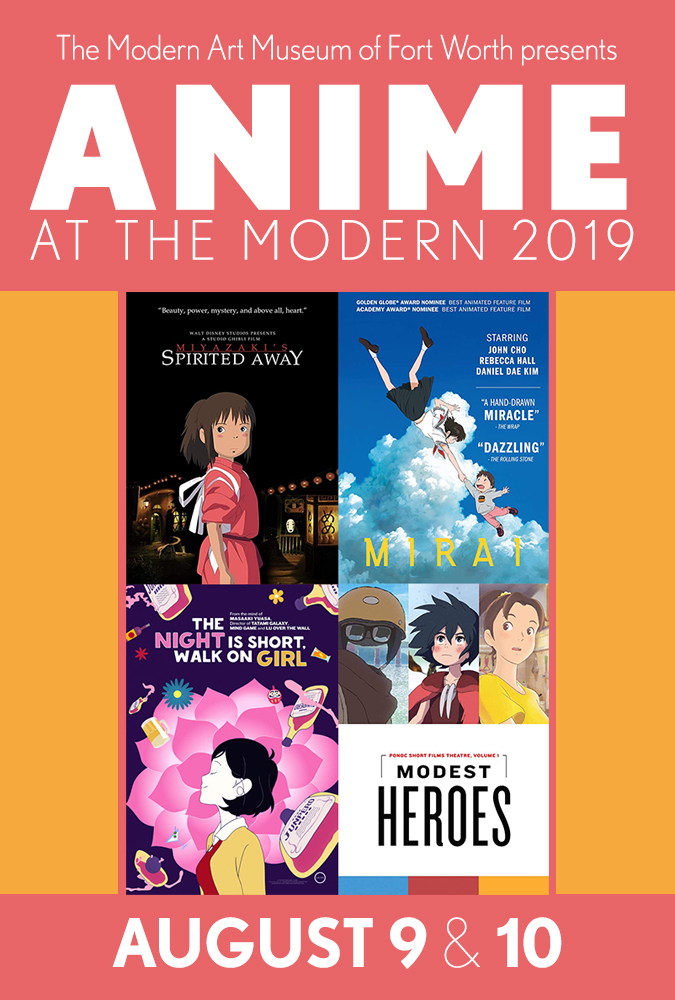 Join us as we celebrate the Japanese anime genre — films that are visually stunning, richly imaginative, and poetic in their storytelling. This summer’s films feature critically acclaimed award winners for Best Animated Feature Film (one Academy Award and two Japanese Academy Awards.)

Screenings will be held in the Modern’s auditorium. Tickets are $10, $9 for Modern members, $7 for Modern Reel People members, and $5 for children under 12. Tickets are available beginning at 10 am, Tuesday, July 23, at www.themodern.org/films or by visiting the Modern’s admission desk during operating hours.

Dr. Marc Hairston is a scientist who researches space weather using the Coupled Ion Neutral Dynamic Investigation (CINDI), a satellite that studies how neutral gas motions and charged particle motions are related. Dr. Hairston is also interested in the scholarly study of anime and manga and is on the board of editors of Mechademia, the first English-language academic journal addressing these topics. He regularly teaches courses examining the themes of science fiction and fantasy in anime and manga, specifically focusing on individual anime creators such as Miyazaki, Shinkai, Hosoda, and Takahata. For the past several summers, Dr. Hairston has enjoyed bringing new and classic anime films to his hometown of Fort Worth through the Modern.

NIGHT IS SHORT, WALK ON GIRL

Winner of the 2018 Japanese Academy Award for Best Animated Feature, Night Is Short, Walk On Girl intertwines the traditional romantic comedy with the magical world of modern Kyoto as a college student’s clumsy attempts to “accidentally run into” the girl of his dreams one summer night spiral hilariously out of control. The two follow a surreal nighttime journey through wedding parties, drinking contests with a god, a supernatural open-air used book fair, and a college festival complete with a roving guerrilla street theater pursued by the police, all on their way to find true love. (Rated PG-13, not recommended for younger children because of smoking, drinking, and suggestive situations.) Directed by Masaaki Yuasa (Lu over the Wall and Ride Your Wave).

Studio Ponoc (Mary and the Witch’s Flower) was formed by several veterans of Studio Ghibli with the mission to carry on the tradition of beautiful and imaginative animated films. Modest Heroes is their anthology of three short films telling “tales of modest heroes of our times.” Hiromasa Yonebayashi (The Secret World of Arrietty, When Marnie Was There) presents Kanini & Kanino, a story about two crab brothers. Yoshiyuki Momose (staff in Grave of the Fireflies, Pom Poko, Princess Mononoke) directed Life Ain’t Gonna Lose, a human drama about a mother and her son dealing with allergies. And Akihiko Yamashita (staff in Spirited Away, Howl’s Moving Castle, Ponyo, The Wind Rises) directs Invisible, telling the tale of a lonely invisible man.

Winner of the 2003 US Academy Award for Best Animated Feature, Spirited Away was the film that introduced most Americans to Hayao Miyazaki’s imaginative worlds. Ten-year-old Chihiro is a modern (and bored) Japanese preteen who stumbles into the fantastic alternative world of Japanese folklore. In order to save her parents (who have been transformed into pigs), she goes to work for the witch Yubaba in a traditional Japanese bathhouse that caters to the spirits and gods. Through her adventures, Chihiro goes on a path of self-discovery that ultimately changes her and everyone around her.

Winner of the 2019 Japanese Academy Award for Best Animated Feature, Mirai is an epic tale of generations of a Japanese family seen through the eyes and imagination of a four-year-old boy. When his new baby sister, Mirai (“future”), comes home from the hospital, Kun-chan is initially excited but then annoyed as the new sister steals their parents’ attention. But when the teenaged version of Mirai appears from the future, she whisks him off on journey back and forth through time to see how the two of them fit into the larger history of their family and the fabric of Japanese culture. Written and directed by Mamoru Hosoda (Summer Wars, Wolf Children, The Boy and the Beast).