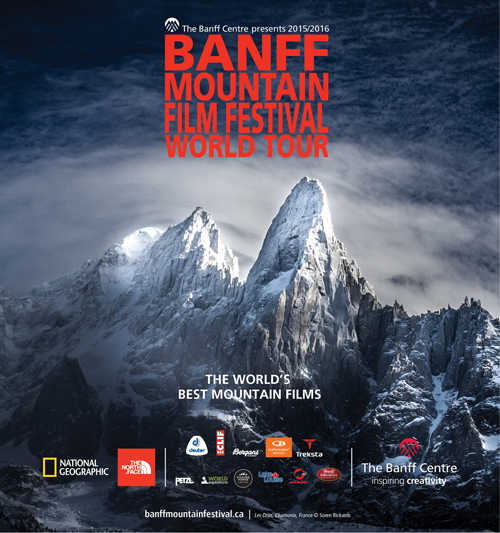 Banff Mountain Film Festival World Tour comes to Fort Worth on September 18 and 19!
BUY TICKETS
The Banff Mountain Film Festival World Tour brings the spirit of outdoor adventure and mountain culture to The Modern Art Museum of Fort Worth. The World Tour features the best mountain films of the year, showcasing amazing filmmaking talent from the world over to an audience that spans the globe.
“As we do every year, we are bringing an exciting program to the screen, allowing everyone to experience these inspiring stories that drive us to keep exploring our world outside,” said Backwoods general manager, Tim Martin, the organizer of the Fort Worth tour event.  “Backwoods hosts several outdoor themed film festival tours each year in Fort Worth and we make every effort not to show any one film twice.  Therefore, we are showing different films each night, allowing us to bring a greater variety of films to our local audience and show some wonderful films that might not be seen on most one day World Tour stops.”
The 2015/2016 World Tour features a collection of exhilarating and provocative films that explore life in the mountains. They highlight remote cultures, profile intense expeditions into exotic landscapes, and bring adrenaline-packed action sports into sharp focus.
“The best part of hosting the World Tour is being able to witness a community of film buffs and lovers of the outdoors come together, share stories, learn more about the mountains they love, and be inspired to set out on new adventures,” Martin said. “You will always connect with old friends and make new ones at the World Tour screenings. That’s the best part!”
The most prestigious mountain festival in the world, The Banff Centre’s Banff Mountain Film Festival celebrated its 40th year in 2015 by continuing to bring the best action, environmental, and adventure films to audiences in Banff and in 40 countries across the globe.
TICKETS: Doors open both nights at 6 p.m. with a cash bar in the Modern’s entry hall.  The program will begin in the theater at 7 p.m.  Tickets are $15 and are available at Backwoods Fort Worth at 2727 W. 7th St., online at www.backwoods.com/banff-2016, and by phone at 817-332-2423.