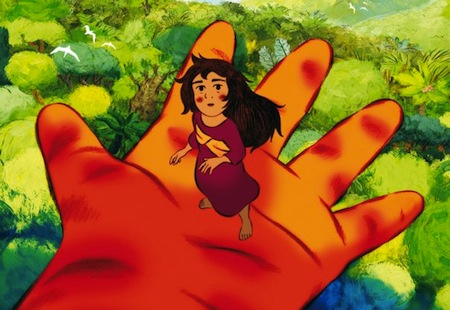 Films are shown in the auditorium at the Modern Art Museum of Fort Worth. Admission is free and open to the public. Seating is limited to the first 250 guests. The age ranges listed are recommendations. Gallery admission is free for film attendees and adult chaperone on the day of the film.

Take a break from the Texas heat for Modern Kids - Summer Flicks! Share the art of the screen with your children as they watch stories unfold and ideas form in delightful and innovative films. The bonus for seeing these films at the Modern is the opportunity to visit the galleries before or after and experience the wonder of the paintings, sculptures, installations, and videos throughout the museum.

Enjoy a selective slate of the best animated shorts from the 2016 New York International Children's Film Festival as well as the critically acclaimed feature films Nocturna and Mia and the Migoo.

MIA AND THE MIGOO
France - dir. Jacques-Rémy Girerd
Animation, English, 2008, 92 min.
This breathtaking animated adventure from Jacques-Rémy Girerd, winner of Best Animated Feature at the European Film Awards, was created from 500,000 hand-painted frames of animation with backgrounds that invoke Van Gogh, Monet, and Cézanne. Featuring superb performances from John DiMaggio, Whoopi Goldberg, Matthew Modine, Wallace Shawn, and James Woods, Mia and the Migoo is a fable-like journey of a young girl who must overcome her fears on a quest to find her father and save the world from destruction.