The Butcher Boy & The Cook 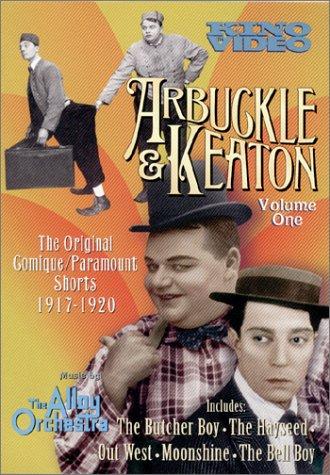 THE BUTCHER BOY (1917)
Customers and clerks frolic in a general store in this silent film classic, starring and directed by Roscoe “Fatty” Arbuckle and featuring the film debut of “The Great Stone Face,” Buster Keaton.
NR, 30 minutes

THE COOK (1918)
One of the finest and funniest of the Arbuckle/Keaton collaborations, The Cook was long considered one of cinema's lost holy grails until a damaged nitrate print was uncovered in the Norwegian Film Archive in 1998 in an unmarked canister. Another print, with 600 additional feet of footage (about eight minutes), was found in the Netherlands in 2002, and the two were combined, using the synopsis from the Library of Congress as a guide to create the restored version. 90% of silent films no longer exist - this is one of the rare survivors.
In a futile attempt at greater efficiency, the chef (Roscoe “Fatty” Arbuckle) of a fancy oceanside restaurant and his assistant (Buster Keaton) wreak havoc in the establishment.
NR, 22 minutes

Roscoe "Fatty" Arbuckle, actor, comedian, director, and screenwriter, was one of the most popular silent stars of the 1910s, and soon became one of the highest paid actors in Hollywood, signing a contract in 1920 with Paramount Pictures for $1 million (equivalent to approximately $13 million in 2016 dollars). The inspiration for many overweight comics, such as John Belushi, Benny Hill, John Candy, and Chris Farley, Arbuckle was famous for his impeccable comic timing.

Arbuckle’s legacy is profound and multifaceted. In addition to his film work, he mentored Charlie Chaplin and discovered Bob Hope and Buster Keaton. Considered one of the groundbreaking comedians of the early film era, Buster Keaton made his screen debut in The Butcher Boy and appeared in a total of 14 Arbuckle shorts before going on to direct and star in a countless number of his own films. Famed film critic Roger Ebert once said that he was “the greatest of the silent clowns . . . not only because of what he did, but because of how he did it. Harold Lloyd made us laugh as much, Charlie Chaplin moved us more deeply, but no one had more courage than Buster. I define courage as Hemingway did: ‘Grace under pressure.’ In films that combined comedy with extraordinary physical risks, Buster Keaton played a brave spirit who took the universe on its own terms, and gave no quarter.”

Robert Edwards has performed as a soloist with orchestras and chamber groups, as well as jazz bands, especially early or "Traditional" jazz. He has accompanied many silent films in performances of his own compositions or arrangements of period music, in addition to composing classically influenced film scores. He has composed and performed music for full-length silent features, such as The Cabinet of Dr. Caligari, Nosferatu, Sunrise, and Hitchcock's Blackmail, as well as comedy films of Chaplin, Keaton, Lloyd, and many others. He provides what a silent-era audience might have heard when the film was first released by creating a pastiche of popular songs of the period, classical and jazz pieces popular at the time, pianistic sound effects, and original compositions to create a vibrant, authentic experience.