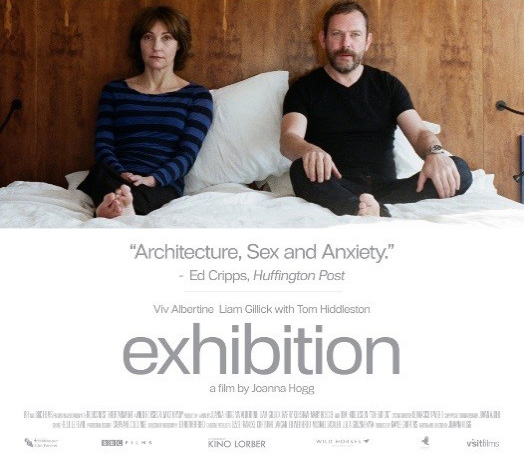 June 23 – Exhibition, 2013
104 minutes
The film Exhibition, 2013, was enthusiastically recommended by artist Janet Zweig, who delivered a Tuesday Evenings at the Modern lecture in spring 2015.

Exhibition depicts married, middle-aged artists who live in a beautiful modernist house in London’s Chelsea. Also designed and built by an artist, the house is at once a labyrinth, a refuge, a prison, and a psychological battleground. As the couple slowly arrive at the painful decision to sell the place, they begin a process of saying goodbye to their shared history under the same roof. Written and directed by artist and filmmaker Joanna Hogg, Exhibition stars former lead singer for The Slits Viv Albertine and Turner-nominated artist Liam Gillick.

“Exhibition is a superbly glacial and composed experiment in fictional cine-portraiture; a refrigerated study in domesticity and sophistication, mysterious and preposterous – a movie that might claim its lineage from Rachel Whiteread's cast sculpture House, or David Hockney's painting Mr. and Mrs. Clark and Percy.” Peter Bradshaw, Guardian