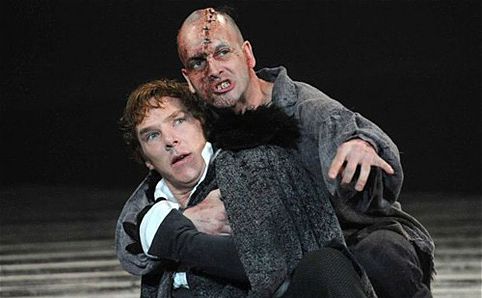 National Theatre Live’s thrilling broadcast of Frankenstein returns to cinemas for a limited time, due to unprecedented audience demand.
Directed by Academy Award®-winner Danny Boyle (Trainspotting, Slumdog Millionaire,London 2012 Olympics Opening Ceremony), Frankenstein features Benedict Cumberbatch (12 Years A Slave, Star Trek: Into Darkness) and Jonny Lee Miller (Trainspotting, Mansfield Park) alternating roles as Victor Frankenstein and his creation.
The production was a sell-out hit at the National Theatre in 2011, and the broadcast has since become an international sensation, experienced by almost half a million people in cinemas around the world.
Childlike in his innocence but grotesque in form, Frankenstein’s bewildered Creature is cast out into a hostile universe by his horror-struck maker. Meeting with cruelty wherever he goes, the friendless Creature, increasingly desperate and vengeful, determines to track down his creator and strike a terrifying deal.
Urgent concerns of scientific responsibility, parental neglect, cognitive development and the nature of good and evil are embedded within this thrilling and deeply disturbing classic gothic tale.