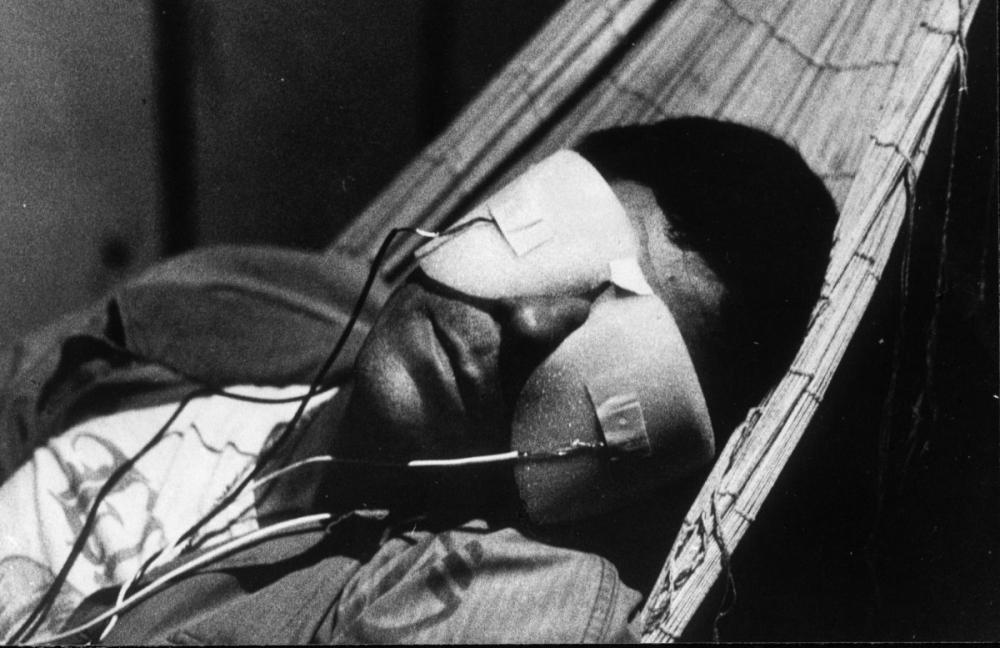 La Jetée – a film made of photographs . . . but also made up of whispers, of heartbeats, of the roars of airplane – feels primitive to the eye and the ear even though it tells of the future. It is a time-travel story yet no movie is so frozen in time. It feels like a film in mourning for film, in memorial to itself.
Michael Koresky, Echo Chamber: Listening to La Jetée

Glenn Kaino, whose work was recently featured in FOCUS: Glenn Kaino, recommends Chris Marker’s beloved La Jetée, one of the most influential and radical science-fiction films ever made. It won the Prix Jean Vigo for short films and was selected by Sight & Sound’s international poll of film critics and directors as one of the top ten greatest works of cinema ever made. In her book Chris Marker: La Jetée, Janet Harbord opens by explaining “La Jetée is a ciné-roman, a film-novel that operates within the strictest economies. It is a film composed almost exclusively of still images, with the bare essentials of a story told in voice-over. It is an extraordinary film of ‘a man marked by an image from his childhood,’ and it opens with a replay of this childhood moment. These are the ‘facts,’ although facts benefit us little in this particular story.”

Criterion Collection notes that Chris Marker, who died in 2012, was a French filmmaker, poet, novelist, photographer, editor, videographer, and digital multimedia artist, whose work challenges all – from moviegoers to philosophers – as it did Marker, with complex queries about time, memory, and the rapid advancement of life on this planet. La Jetée gives witness to Marker’s enormous creativity, attention to every detail, and masterful use of film to a poetic end.
(27 min. French with English subtitles)