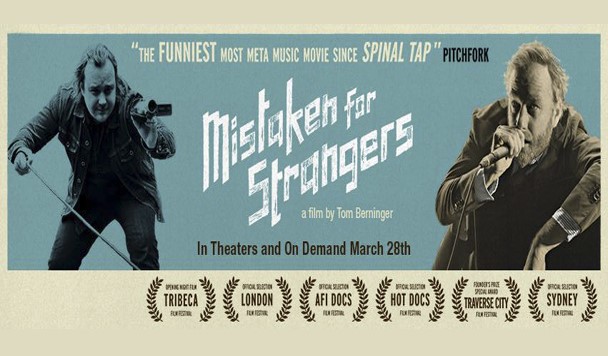 June 16 – Mistaken for Strangers, 2013
75 minutes
Hailed by Michael Moore as “one of the best documentaries about a band that I’ve ever seen” and by Pitchfork as “the funniest, most meta music movie since Spinal Tap,” Mistaken for Strangers is a truly hilarious, unusual, and moving film about two brothers, Matt and Tom Berninger. Matt, the lead singer of the critically acclaimed rock band The National, invites his brother Tom, a loveable slacker, filmmaker, and metal-head still living with his parents, to join the band as a roadie as The National embarks on their biggest tour to date. Unbeknownst to Matt, Tom decides to film the entire adventure, and what begins as a rock documentary becomes an honest portrait of a charged relationship between two brothers and the frustration of unfulfilled creative ambition.

Mistaken for Strangers relates to the Modern’s recent acquisition of A Lot of Sorrow, 2013–2014, by Icelandic performance artist Ragnar Kjartansson, for which Kjartansson enlisted The National to perform the song “Sorrow” repeatedly, for more than six hours. In this minimalist yet expansive video of the performance, the band commences with “Sorrow found me when I was young, sorrow waited, sorrow won,” conjuring notions of romantic suffering and serving as a melodic and melancholic soundtrack for the Modern’s current exhibition, Framing Desire: Photography and Video.