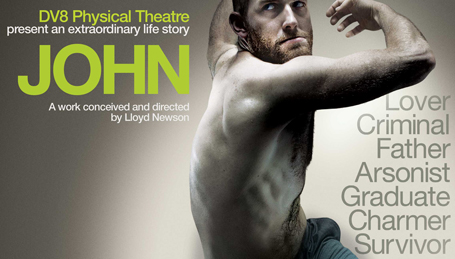 Internationally renowned DV8 Physical Theatre bring their powerful new production to the National Theatre.
DV8 Physical Theatre has produced 18 highly acclaimed dance-theatre works and four films for television, which have garnered over 50 national and international awards.
The company’s new production, JOHN, authentically depicts real-life stories, combining movement and spoken word to create an intense and moving theatrical experience.
Lloyd Newson, DV8’s Artistic Director, interviewed more than 50 men asking them frank questions, initially about love and sex. One of those men was John.
What emerged was a story that is both extraordinary and touching. Years of crime, drug use and struggling to survive lead John on a search in which his life converges with others, in an unexpected place, unknown by most.
Don’t miss this eagerly anticipated new production, broadcast live from the National Theatre.