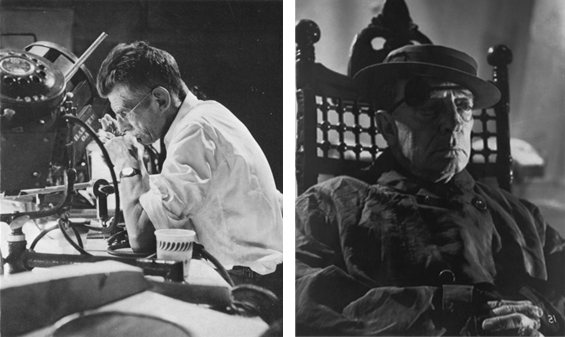 I am lost in admiration for this work . . . the film is ambitious, thrilling and illuminating. It represents an invaluable addition to Beckett scholarship. NOTFILM is a superb film.
James Knowlson, OBE (Beckett’s authorized biographer and founder of the Samuel Beckett Archive)

Notfilm, by the filmmaker/archivist Ross Lipman, is a feature-length movie on the production and philosophical implications of Samuel Beckett’s 1964 FILM, Beckett’s only work for projected cinema. Lipman’s documentary sheds light on the embattled collaboration between the Nobel Prize-winning playwright and silent-era genius Buster Keaton that resulted in the craziest chase film ever committed to celluloid.

This longtime dream of Lipman was a seven-year global search with astonishing results, such as the discovery of the long-lost and only prolonged recording of Beckett discussing the creation of his work, the kind of discovery archivists and scholars live for. Tanya Goldman opens her April 6, 2016, interview in the Brooklyn Rail, “Ross Lipman’s documentary Notfilm is an evocative meditation on Beckett, cinema, memory, and the nature of vision and perception, and the first foray into feature filmmaking by the renowned archivist and essayist. More than a standard retelling of a fascinating production history, Lipman’s ‘kino-essay’ is punctuated by the director’s own contemplative voiceover, recently discovered reels from Film’s pre-production, and lyrical sequences teeming with historical film footage culled from silent newsreels, Beckett’s television plays, and the oeuvres of Murnau, Vertov, and Buster Keaton, who starred in Film.”

Among the praise that Lipman and his “kino-essay” Notfilm have received, Tony Pipolo notes in his Artforum review, “The credits for Notfilm list Lipman as writer, photographer, editor, and narrator, but not as director. Does this imply that a director is merely the sum of the other skills? Or is it an attempt at modesty? If the latter, it is belied by the ambition, scope, research, and exhilarating sweep of his project.” In fact, in the director’s statement included in press materials, Lipman explains, “Notfilm asks, as Beckett did, what cinema can tell us of the human experience. It aspires, as Beckett did, to Joyce’s dictum that artworks should not be about things, but be things themselves.”
(130 min.)

Tuesday Evenings at the Modern: Films is an extension of the very popular lecture series Tuesday Evenings at the Modern, which is offered 10 weeks in the spring and fall of each year, this film-based weekly program runs through the summer months and strives to continue the consideration of ideas and issues pertaining to the art and architecture of the Modern and to contemporary art in general.
Selections for screenings are related to or recommended by artists and speakers who have participated in the lecture series or are otherwise affiliated with the museum. There is nothing particularly prescriptive about the line-up, but as with the lecture series, themes can be found and connections made. To create a full experience, these presentations include a brief introduction and opportunity for discussion following the films.
Seating is available in the Modern’s auditorium at 6:30 pm, and the program begins at 7 pm. The museum’s galleries and Café Modern's bar service are open until 7 pm on Tuesdays, June 7 through July 26, 2016.