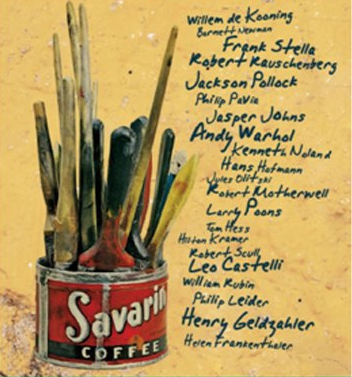 June 7 – Painters Painting: A Candid History of the New York Art Scene, 1940–1970, 1973
In the past, Emile de Antonio has made some fine documentaries, including Point of Order and Millhouse. . . . His newest film, Painters Painting, represents a change of mood. It’s a great big, cheerfully uncritical hug of a movie about a subject he adores, the contemporary New York art scene and the people who make it hustle. Vincent Canby, New York Times, March 20, 1973

For this Tuesday Evenings: Films, we seek to shed light on the exhibition Frank Stella: A Retrospective by screening Painters Painting. Released in 1973, this is the definitive documentary on the New York School of painters from 1940 to 1970. Director Emile de Antonio captures the zeitgeist of this existentialist time as he interviews key artists such as Willem de Kooning, Barnett Newman, Hans Hofmann, Robert Motherwell, Helen Frankenthaler, Jasper Johns, Robert Rauschenberg, Andy Warhol, Larry Poons, Kenneth Noland, and Frank Stella, as well as a key figure of that moment, curator and art historian Henry Geldzahler. With this now-historical film, de Antonio gives a revealing glimpse into the studios and attitudes of a progressive and critical era in art.
(116 min.)