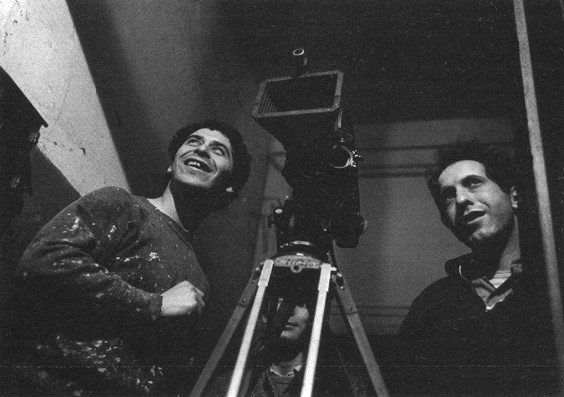 Tuesday Evenings at the Modern: Films opens with seminal works by the American photographer and documentary filmmaker Robert Frank. Frank is best known for his photography book The Americans, 1958, which offered a new approach to photography and had a significant influence on many of the artists represented in the Museum’s current exhibition Framing Desire: Photography and Video. Here, we focus on Frank’s films, which share his keen sense and authentic presentation. The following Robert Frank films are from the Museum of Fine Arts, Houston’s film collection:

Pull My Daisy, 1959
28 minutes
Pull My Daisy is a classic look at the soul of the beat generation, made with writers Jack Kerouac and Allen Ginsberg, and painters Alfred Leslie, Larry Rivers, and Alice Neel. It was written and narrated by Kerouac, based on his unproduced play The Beat Generation. It tells the story of a bishop (Richard Bellamy) and his mother (Alice Neel) who pay a visit to Milo, a railroad worker. At the same time, his poet friends, Ginsberg, Peter Orlovsky, and Gregory Corso, hang around quizzing the bishop about the meaning of life and its everyday relationship to art and poetry. Pull My Daisy is recognized as one of the most important works of avant-garde cinema.

The Present, 1996
27 minutes
Simple objects, photographs, and events prompt Frank to self-conscious rumination. From his homes in New York and Nova Scotia and on visits to friends, the artist contemplates his relationships, the anniversary of his daughter’s death, his son’s mental illness, and his work.

True Story, 2004/2008
26 minutes
Speaking in voiceover, the artist narrates scenes shot in his homes in New York and Nova Scotia. His rambling commentary returns to familiar themes of memory and the loss of friends and family members. Brief excerpts from earlier films are shown, along with Frank’s photographs, the art of his wife, June Leaf, and extraordinarily detailed letters written by his son, Pablo (1951–1994). Alternately poignant, reflective, self-mocking, and angry, this candid autobiography reveals Frank’s late career preoccupations. True Story received the Principal Prize at the 2009 Oberhausen Short Film Festival.k