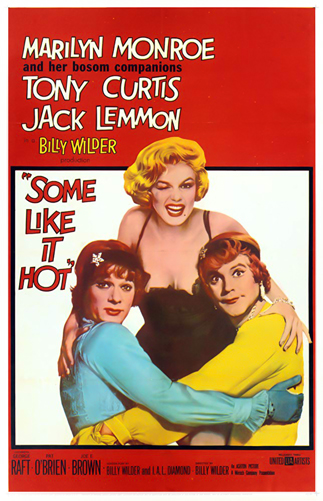 Some Like It Hot is a 1959 American romantic comedy set in 1929, based on a screenplay by Robert Thoeren and Michael Logan from the French film Fanfare of Love. Directed and produced by Billy Wilder, it stars Marilyn Monroe, Tony Curtis, and Jack Lemmon. The film is about two musicians who dress in drag to escape from mafia gangsters. It is worth noting that the film was produced without approval from the Motion Picture Production Code because it plays with the idea of homosexuality and features cross-dressing. That said, the code had been gradually weakening in its scope during the early 1950s due to greater social tolerance for previously taboo topics in film, but it was nevertheless enforced. These issues are not lost on Simmons, who refers to the film in My Art and whose work is readily recognized for challenging gender expectations.