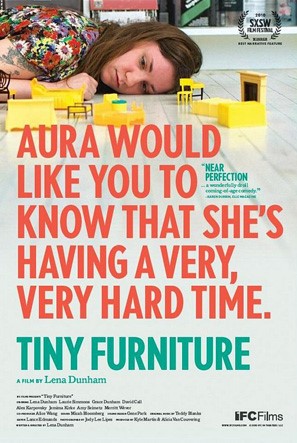 “Why do I feel such affection for Tiny Furniture? It’s a well-crafted film, for one thing. . . . It shows a command of style and purpose; Dunham knows what she wants and how she needs to get it, and succeeds. Her character Aura is not charismatic or glowing or mercurial or seductive or any of those advertising adjectives, but she believes she deserves to be happy, and we do, too.” Roger Ebert

An extremely ambitious early effort, Tiny Furniture is a 2010 independent film written by, directed by, and starring Lena Dunham (Girls). It premiered at the South by Southwest film festival where it won Best Narrative Feature. Laurie Simmons, an artist represented by Walking House, 1989, in the Modern’s current exhibition Framing Desire: Photography and Video, is Dunham’s mother and is cast as such in Tiny Furniture. The title of Dunham’s film clearly references Simmons’s signature use of miniature furniture in the photographs and films that launched and secured her own artistic career.

Tiny Furniture follows 22-year-old Aura as she returns home from her Midwest liberal arts college to her family’s TriBeCa loft with a seemingly useless film studies degree, a failed relationship, and a lack of direction. The film focuses on Aura’s relationships with friends and family, in particular her mother (a successful photographer) and her sister (played by Dunham’s real-life sibling, Grace Dunham) who is graduating from high school and preparing for college, embarking on the “adventure” Aura just completed with dissatisfaction. Dunham, also the daughter of painter Carol Dunham, predominantly shot the movie in her parents’ actual apartment. Dunham locates endless sources of refreshing humor in Aura’s plight. Both confessional and amusing, Tiny Furniture is an authentic, incisive portrait of a young woman at a crossroads.