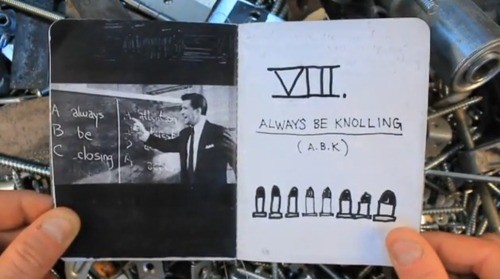 “Any time you teach something it’s an opportunity to define it in greater depth and seriousness for yourself. So the movies are and continue to be a way for me to understand my practice in depth.” Tom Sachs

Tom Sachs, described in the New Yorker as “a mix of mad scientist, obsessive tinkerer, cult guru, task master general, starry-eyed theoretician and workout champion,” created “the studio” as a means to accomplish the incredibly ambitious work that has made him one of today’s most inspiring and influential sculptors. Referring to “the studio” as a teaching hospital, Sachs produced rules-of-operation, postindustrial films that are required viewing for all studio applicants. These films can be found at tomsachs.org and are available to anyone. This access has given Sachs’s “movies” a cult-like following thanks to their practical wit and philosophical insight. In each of these brief instructional films there is as much poetry as instruction at play, and in the end, their straightforward, unforgiving demands seem like words to live by for all.

After Sachs’s spring 2015 Tuesday Evenings lecture was received with great enthusiasm, it was clear that these short films should be screened as part of the Modern’s new Tuesday Evenings at the Modern: Films program. Sachs generously agreed to our holding a one-night festival to offer fans and newcomers an opportunity to gather together to watch, consider, and discuss favorites such as Love Letter to Plywood, How to Sweep, Color, Space Camp, and Ten Bullets.