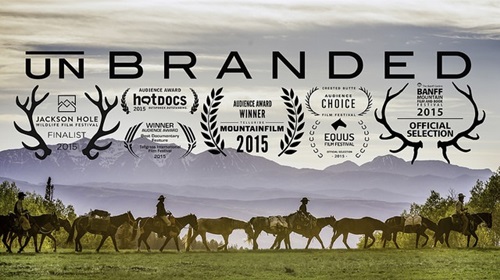 Special One-Time Screening of Unbranded at the The Modern Art Museum of Fort Worth on Thursday, March 24.

Fort Worth Stewards of the Wild is hosting a special screening of the award-winning film, Unbranded, at The Modern Art Museum of Fort Worth on Thursday, March 24, introduced by the project’s producer, Ben Masters.

Unbranded documents the journey of four young men as they plot to adopt, train, and ride a string of wild mustangs 3,000 miles to raise awareness of the number of wild mustangs held in federal facilities awaiting adoption. The Audience Award winner at Telluride Mountainfilm and Hot Docs Canadian International Documentary Festival, Unbranded is a tale of danger and resilience that shines light on the complex plight of our country's wild horses.

The venture was conceived by Masters, who along with three fellow recent graduates of Texas A&M University, embarked on the arduous expedition with sixteen mustangs. Lasting more than five months and spanning five states, from the Mexican to Canadian borders, the crossing took place almost entirely on public lands, including Yellowstone, the Grand Canyon and Glacier National Parks.  The trip became an epic journey of self-discovery, tested friendships, and iconic landscapes that included runaway horses, a sassy donkey, perilous mountain passes, rodeos, sickness, injury, and death.

This special screening of Unbranded is being hosted by Fort Worth Stewards of the Wild, the local chapter of a young professionals program supporting the mission of the Texas Parks and Wildlife Foundation and the Texas Parks and Wildlife Department.  Stewards of the Wild seeks to engage 21-45 year-old outdoor enthusiasts by hosting exclusive events to raise awareness of conservation issues facing future generations.  The event is being sponsored by outdoor retailer, Backwoods, and rural lending cooperative, Lone Star Ag Credit.

Schedule
The event will begin at 6 p.m. with a social hour in The Modern’s grand lobby with a cash bar.
The show begins promptly at 7 p.m. and the film will be introduced by Masters who will also engage the audience in discussion following the film.