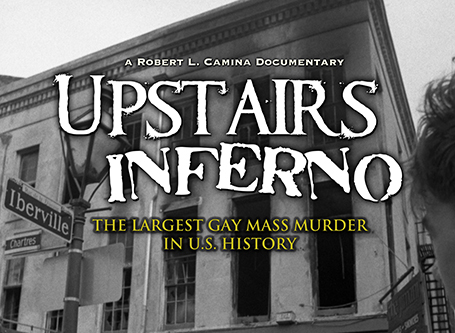 Upstairs Inferno is a full-length documentary about the largest gay mass murder in U.S. history. On June 24, 1973, an arsonist set fire to the Up Stairs Lounge, a gay bar located on the edge of the French Quarter in New Orleans, Louisiana. The result was the largest gay mass murder in U.S. history. Despite the staggering historical significance, few people know about the tragedy. Thirty-two people were killed and some bodies were never identified. One-third of the New Orleans chapter of the Metropolitan Community Church was killed in the blaze, including two clergy.

With the assistance of narrator, CHRISTOPHER RICE (famed New Orleanian and New York Times best selling author), interviews with people personally involved, historians and experts on the fire as well as police reports, crime scene photographs, personal photographs, newspaper clippings and video clips from local news stations, tell the little known story about how this neighborhood bar became the notorious site of a horrific tragedy, which would permanently alter their lives, and the course of the gay rights movement in New Orleans. Q&A following the film with Camina.