When We Were All Broncos 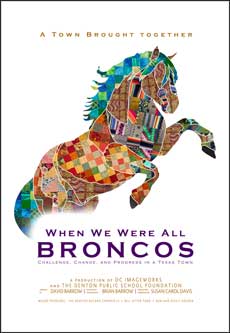 Like many public schools across the country during the 1960s and 70s, those in Denton, Texas, faced the challenges of integration during a time of social and cultural turmoil. Although the main narrative traces the amazing state championship bid of its racially integrated football team, the film also tells the story of the students, educators, and community who rallied around the shared challenges they faced despite – or sometimes because of – their differences.  Through interviews with students, teachers, administrators, coaches, and other community members, the film paints a picture of a community united by a single school and will reflect on the ways this period contributed to the legacy of tolerance, achievement, and excellence that Denton enjoys today.

Movies That Matter is a bi-monthly film series program of the City of Fort Worth’s Human Relations Commission.

The series was created in 2010 as a way to create awareness in the community about human rights issues affecting people in Fort Worth and worldwide. The Movies That Matter Film Series will present a human rights-related film screening and moderated discussion in February, April, June, August, October and December.